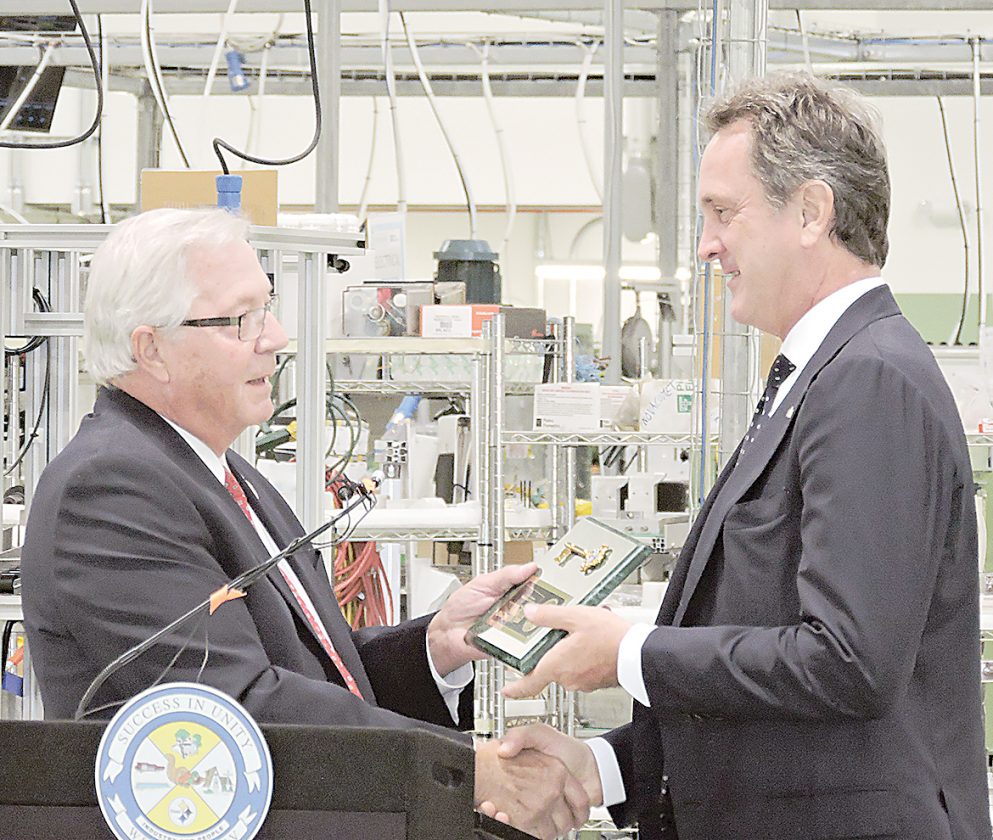 WEIRTON — A journey of almost six years culminated Monday as Pietro Fiorentini USA celebrated the opening of its new facility in the Three Springs Business Park in Weirton.

According to company officials, Monday’s festivities would not have been possible without the cooperation of individuals across West Virginia.

“This was possible because we obtained great support from West Virginia,” Mario Nardi, chief executive officer of Pietro Fiorentini Group, noted prior to Monday’s ribbon cutting.

The new $9 million facility is comprised of a 30,000-square-foot assembly and warehouse area, built on 27 acres, which officials say will be available for future expansion.

It currently is home to 29 employees.

Nardi explained, while Pietro Fiorentini has been a global company for many years, the Weirton operation will provide new opportunities in the United States, and it’s an approach the company plans to replicate as it expands into new markets around the world, including France, China, Hungary and Algeria.

“This is, for sure, our celebration day,” Trevisan said.

“This is just the beginning,” Trevisan said, adding plans are to eventually expand the facility to 90,000 square feet. “We are just at the beginning of a new chapter of our story.”

Mayor Harold Miller was among those welcoming the company, presenting Nardi with a ceremonial key to the city, and looking back at some of Weirton’s manufacturing and cultural history and contributions. This included Cyrus Ferguson’s initial sale of his farm land to E.T. Weir for the beginning of Weirton Steel Corp. and the development of pull tabs on pop cans and other containers. He noted three major movie productions have located in Weirton, and that the city was home to two Super Bowl champions.

The city’s greatest resource, though, is its people, and Miller said the people will continue to work for the community’s future.

“There are a lot of things going on. The future is bright,” Miller said.

“Thank you for your faith and investment in our community,” Capito said. “You will never regret your investment here. It’s a big family that works together.”

U.S. Rep. David McKinley, R-Wheeling, also thanked the company for its confidence in the people of the Northern Panhandle.

“This is the kind of news we’ve been looking for,” McKinley said, adding there are continuing efforts to provide education and training opportunities for Pietro Fiorentini and other industries looking to locate in the Upper Ohio Valley. “Shelley and I are going to be with you every step of the way.”

Pat Ford, executive director of the Business Development Corp. of the Northern Panhandle, explained the project would not have come to fruition without cooperative efforts from the state of West Virginia, Brooke County Commission, City of Weirton, U.S. Environmental Protection Agency, the Brooke-Hancock-Jefferson Metropolitan Planning Commission and others.

“In West Virginia, we are small in capacity,” Ford said, adding the cooperation across the state outweighs the lack of traditional resources. “We are able to illustrate that our ladder to our decision makers is shorter than anyone.”

Work with Pietro Fiorentini began in January 2013, according to Ford, with a groundbreaking for the new facility held two years ago. Ford noted the lengthy process made it possible to build the relationship with the company.

U.S. Sen. Joe Manchin, D-W.Va., was unable to attend, but sent a representative to speak on his behalf.

Gov. Jim Justice also made an appearance for the ribbon cutting.

“We’ve worked with this great company a long time,” he said. “We’re just scratching the surface at what is possible. We don’t want to blow it.”

According to Michael Graney, executive director of the West Virginia Development Office, West Virginia is home to more than 130 companies, representing 36 nations and employing more than 30,000 state residents.