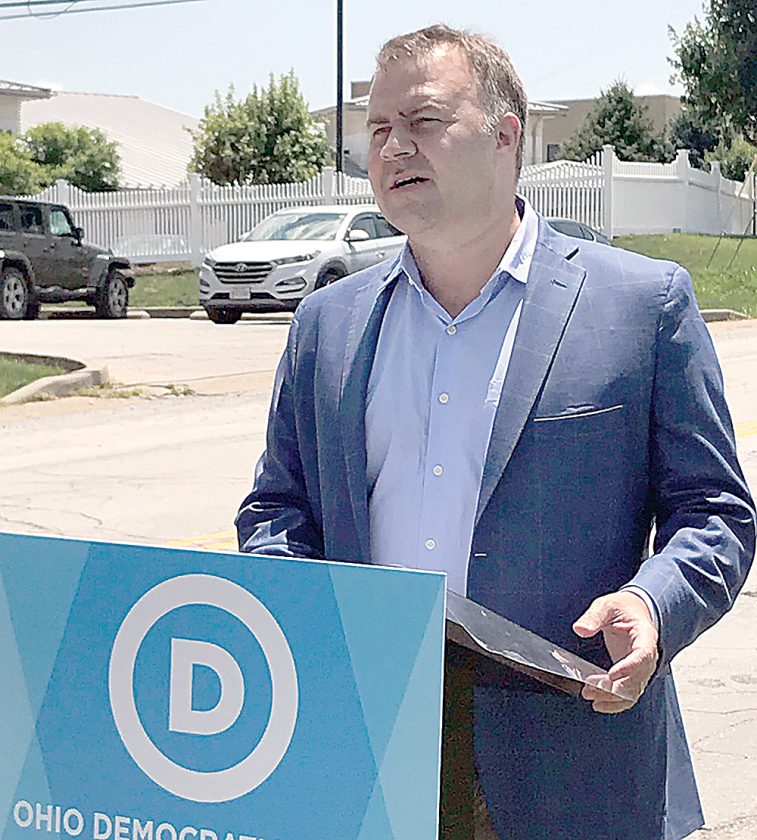 HEALTH LAW DEFENDED — State Democratic Party Chairman David Pepper Tuesday warned of the “devastating impact” on health care and jobs in Ohio if the repeal of the Affordable Care Act is upheld. A federal appeals court in New Orleans heard oral arguments Tuesday in the case, which had been brought by Republican-leaning states including Texas and West Virginia. A federal judge in Texas last year decided the ACA was unconstitutional because Congress removed the individual mandate penalties in 2017, but stayed his ruling pending appeal. -- Linda Harris

STEUBENVILLE — Ohio Democratic Party Chairman David Pepper had planned to use the $75 million construction zone at Trinity Medical Center West as a dramatic backdrop Tuesday when he talked about what he describes as the “devastating impact” repealing the Affordable Care Act would have on the average Ohioan.

But at Trinity’s request, the news conference was moved off the hospital’s property to the sidewalk along Johnson Road, where Pepper, undeterred by the move, the blazing sun or the heat reflected by the pavement, warned of dire consequences if a GOP-led bid to overturn the health care law is successful.

“It would be devastating to Ohio, to Ohioans’ health care, to jobs in Ohio,” Pepper said. “Almost 5 million people in Ohio with pre-existing conditions would no longer be covered. About a half-million Ohioans covered by the Medicaid expansion would lose their coverage and the Ohio Hospital Association thinks one in four hospitals would close because they rely so much on ACA.”

While Democrats around the country were busy Tuesday trying to rally voter attention about what a repeal would do to the nation’s health care community, the Fifth Circuit Court of Appeals in New Orleans was hearing oral arguments in the appeal of a 2017 lower court ruling that ACA was unconstitutional.

The challenge had originally been filed by 20 Republican-leaning states, including Texas, Tennessee, Indiana and West Virginia, who’d argued that in 2017 when Congress voted to eliminate the individual mandate penalty, it became unconstitutional and thus the rest of the ACA was invalidated.

Last year U.S. District Judge Reed O’Connor sided with the Republican-led coalition, reasoning that without the individual mandate penalty, which levied fines on those without health coverage, the ACA was unconstitutional.

But O’Connor stayed his ruling to allow the ACA’s supporters an opportunity to appeal.

In an amicus brief filed with the appeals court, Yost had argued the “individual mandate” could be removed from the ACA without eliminating other provisions, including protections for individuals with pre-existing conditions.

In his brief, joined by Montana, Yost argued that when Congress eliminated the penalty it had “expressly left in place protections that would ban insurance companies from denying coverage to people with pre-existing conditions.”

Repealing all of the ACA could leave 1.9 million Ohioans and more than 10 million people nationwide without health insurance because they have pre-existing conditions, and also would impact the nation’s elderly population, Yost had said.

But Pepper pointed out more than health care coverage is at stake: One in seven Ohioans works in the health care industry, he said. Locally, he said the percentage is even higher — 23.3 percent.

“In all the chaos of Washington, the tweets and the British Ambassador’s cables, the truth is the issue that matters most to everyday people is health care,” Pepper said, a reference to reports the British ambassador had used words like inept, insecure and incompetent to describe Trump in diplomatic cables leaked to the press.

Pepper said a Trump win would invalidate the bipartisan agreements in Ohio achieved by the Kasich administration.

“If Trump wins, that tears it all up. It would really end all of that progress,” he said.

A Trinity spokesperson, meanwhile, said the press conference was not allowed on the Trinity campus because it “was not a Trinity press conference, it had nothing to do with Trinity and, as a rule, we don’t get involved” with political issues.