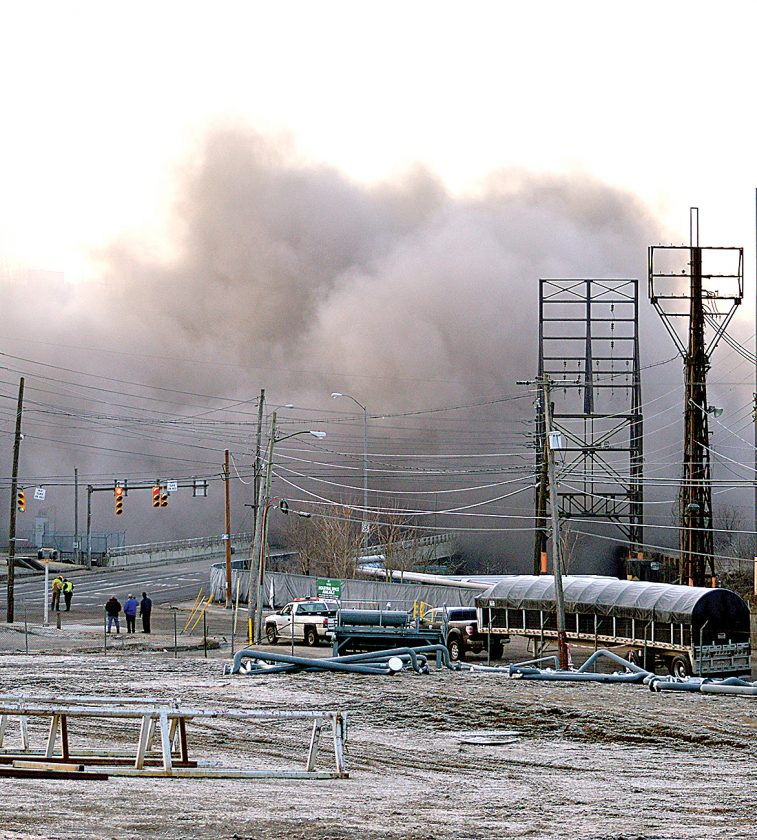 GONE IN A CLOUD OF DUST — Debris begins to settle after the demolition of the basic oxygen plant on March 9. -- File photo

The suit, filed in Hancock County Circuit Court, alleges at least 78 residents and property owners were irreparably harmed by the March 9 implosion, which sent an enormous cloud of dense black smoke into the air and showered the Weir Avenue neighborhood directly behind it with particulates. Vibrations from the blast also damaged buildings in the Weir Avenue neighborhood, the complaint states.

The suit also suggests the owner of the mill property, Frontier Group, put corporate profits above public safety, alleging the use of explosives was nothing but “a less costly way … to demolish the building, rather than … the safer method of cranes, welders, riggers and cutting torches.”

Nogay said wind gusts the day of the blast reached speeds of up to 33 miles per hour. Given the windy conditions and lack of rain, “they had to anticipate this was going to happen,” Nogay said after filing the 31-page complaint. “This was not their first time demolishing something like this, they know what happens, the dangers associated with it.”

The lawsuit accuses Zuchlewski and others of misleading the public about the risks associated with using explosives to level the old mill and not fulfilling promises to “see to cleaning up and repairing” any damage caused by the blast. It also alleges negligence on the part of Panhandle Cleaning, which withdrew its remediation teams two weeks after beginning the cleanup.

Panhandle Cleaning claims Frontier terminated its services when it asked for insurance information so it could begin submitting bills or, alternatively, be paid by Frontier.

But Nogay’s lawsuit pointed out Frontier called Panhandle’s departure “deplorable” and attempted to get property owners to release them from liability for “any property damage caused by Panhandle Cleaning and Restoration” in the aftermath of the demolition.

Panhandle Cleaning has since filed suit against Frontier, alleging the New York company terminated its services March 19 when Panhandle asked for insurance billing information or payment for its cleaning services and claiming Zuchlewski had defamed them in comments to residents and the media. That suit, also filed in Hancock County, claimed Frontier had “refused to provide any information or to arrange to make payment and ordered (Panhandle) to immediately cease activities and leave the job site.”

Panhandle says it is owed $178,526 for its post-blast cleanup services.

The Weir Avenue residents and property owners, meanwhile, are seeking compensatory and punitive damages, as well as medical monitoring. They also are asking the court to declare the city’s permitting process for industrial demolitions “totally inadequate.”

Nogay said affected residents “need the state, federal and local government to step up and help (them).”

“I’ve asked for monitoring and other assistance, it’s been met with a deaf ear,” he said. “There’s obviously serious health risks, as evidenced by the laboratory results and chemical analysis (of the particulates). Hexavalent chromium, CR6, that’s real dangerous — they’re all dangerous.”

He contends the size of the particulates were such that if you inhaled them, “they get in your lungs and you can never expel it. That’s what has us concerned.”

“A lot of it has not settled yet,” he added. “A lot has been washed by the rains and the hosing that took place into storm sewers and water supplies — this is a place where continuous casting operations with heavy metals took place for some 60 years. It’s clearly unacceptable.”