Tips on weatherization given in Steubenville 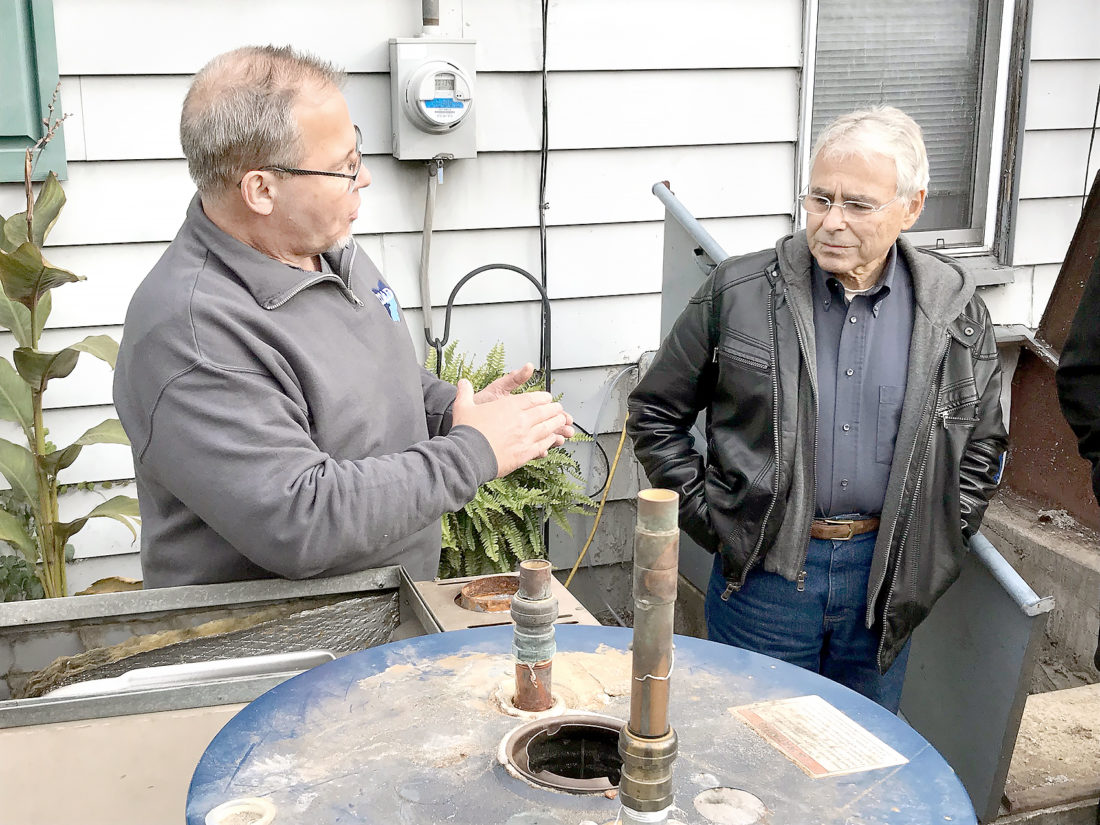 TIPS — Steubenville Mayor Jerry Barilla, right, gets some weatherization tips from Dean Redinger of the Corporation for Ohio Appalachian Development, Friday. Barilla and state Rep. Jack Cera, D-Bellaire, were among the guests at a Weatherization Day open house at a home on North Eighth Street. Redinger has been with COAD’s weatherization program for the past three decades. -- Linda Harris

STEUBENVILLE — Pamela Threet said she never thought there’d be a way to address faulty furnaces or missing insulation that didn’t involve trying to borrow money or incurring massive credit card debt, until she found out about the Home Weatherization Assistance Program available through the Jefferson County Community Action Council.

“It’s a blessing,” she said. “I was never aware of it. When they came around, I could see everything they did … my son needed a furnace, I didn’t know how I was going to do it, but it’s all taken care of.”

CAC works in partnership with the Ohio Developmental Services Agency and the Home Weatherization Assistance Program, American Electric Power and Columbia Gas of Ohio to help income-eligible homeowners and tenants.

HWAP crews work year-round to insulate attics, blow cellulose into side walls, caulk windows and doors and take other “practical measures” to minimize or stop cold air from infiltrating peoples’ homes. Crews also check furnaces, repairing and replacing them as needed, and even check gas cooktops.

The program, designed to increase energy efficiency and reduce energy costs, targets low-income, the elderly, and citizens with disabilities.

“It helps keep homes, the housing stock, up-to-date and strong in communities, rather than (deteriorating) and leaving them to the wrecking ball,” state Rep. Jack Cera, D-Bellaire, said Friday at an open house in Steubenville celebrating Weatherization Day.

The Corporation for Ohio Appalachian Development’s Tom Calhoun said more than 400,000 Ohio homes have benefited from the program since its inception in 1975.

“What we do saves energy,” he said. “Homes are going to be more comfortable. What we do is good for the environment. It creates jobs and it stabilizes the housing stock. It’s preventing homelessness in so many ways.”

Calhoun said crews tasked with weatherizing the 100-year-old house on Eighth Street occupied by Threet’s son discovered the only insulation in it was “pigeon poop and coal dust.” The furnace and hot water heater had to be replaced, and there were holes in the chimney and other issues.

“We test in and we test out,” he said. “We make sure all of the safety issues are corrected and when we leave, the home is safer than when we came in.”

Mike McGlumphy, CAC chief executive officer, said the program helps lower utility usage, which saves the homeowners money. Unlike in other communities, Jefferson County CAC identifies and trains individuals in its work force development program to do the weatherization work.

McGlumphy said he has two crews working now, “and they can do two houses in about three days.” He said it costs on average about $7,200 per house.

“We do about 40 houses a year,” he said, adding that’s just the tip of the iceberg. “It’s probably one of the best kept secrets.”

Residents interested in the program, free to those meeting eligibility requirements, can schedule an appointment by calling (844) 493-1195.