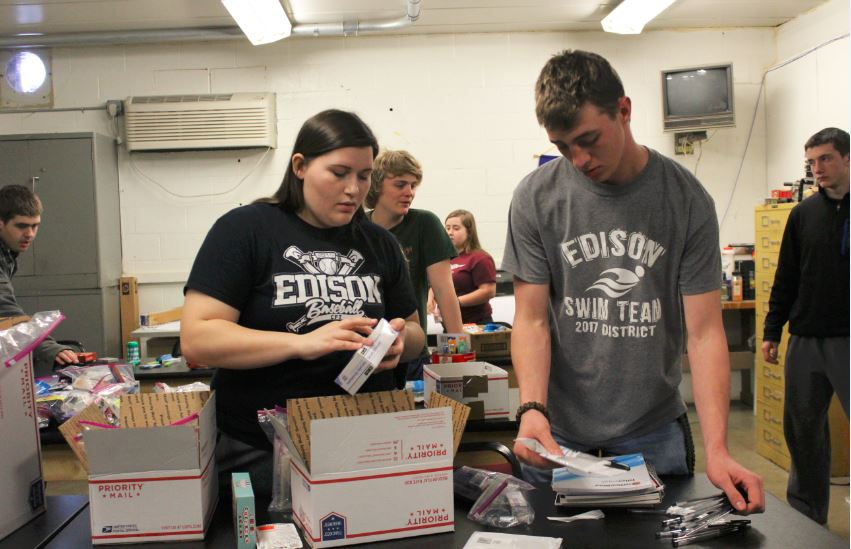 About a half dozen boxes were filled with hygiene products, snacks and miscellaneous items for shipment to service personnel and fulfill a project two members organized following a trip to the nation’s capital last summer.

Junior Sydni Ward, who is the chapter vice president, said she and FFA President Rachael Cline, a senior, attended an FFA Leadership Conference in Washington, D.C., in July and were encouraged to perform a charitable task.

“We had to make a Living to Serve plan and come back to do some good for the community,” Ward said. “We had different ideas but decided on this.”

The organization accepted soap, toothpaste, nonperishable goods, beef jerky and other snacks, notebooks, thank-you cards and pens during a collection around Christmastime. Ward added they sought addresses for local military personnel and researched the AnySoldier.com website to help those without families so they would not be forgotten.

“We are doing six boxes but will likely get more because we have so many things,” she added. “We have soap, lotion, hygiene items, snack foods and items they need on a daily basis.”

FFA members packed up the boxes to be shipped. While the website did not disclose the exact location of the soldiers for safety purposes, Ward said the boxes could reach bases as far as Afghanistan. No matter where they go, Ward is optimistic the items will let the recipients know their bravery and service are appreciated.

She noted the project provides the FFA members a chance to perform a civic duty.