‘Stepping Out of Your Story and Stepping Into Your Greatness’ theme 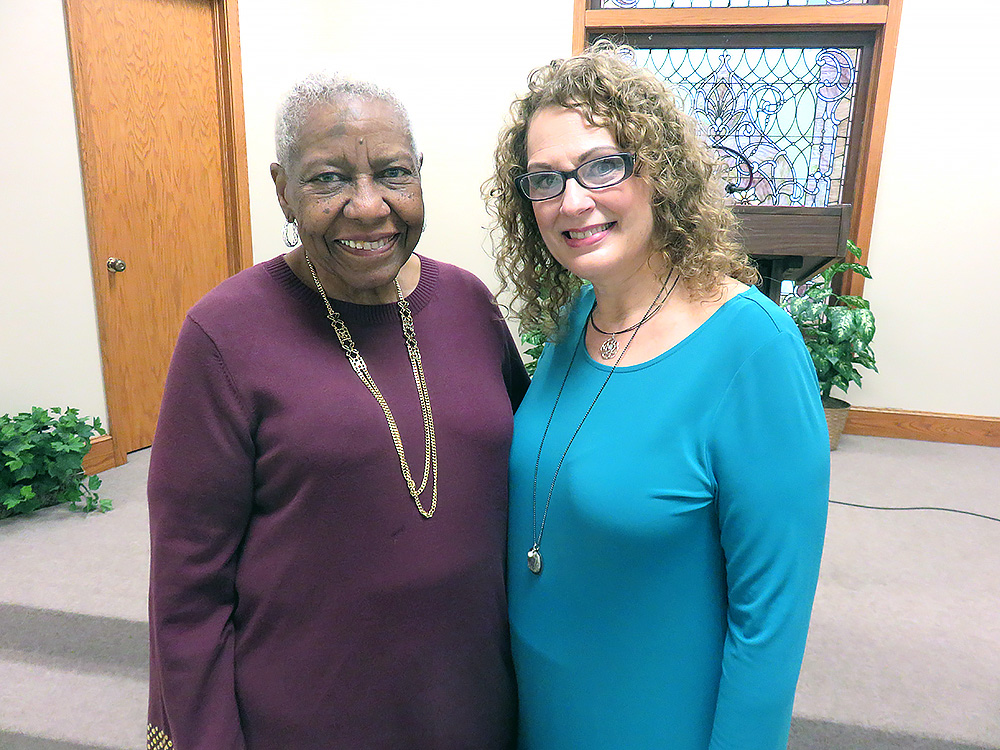 GUEST SPEAKER — Sophie Spencer, left, executive director of the YWCA of Steubenville, poses with Sherrie Dunlevy, the presenter at the Feb. 6 installment of the ongoing “Taking the Lead” breakfast series. -- Janice Kiaski

STEUBENVILLE — “Stepping Out of Your Story and Stepping Into Your Greatness” was the theme of the latest “Taking the Lead” breakfast series presentation where a small group of women were encouraged to step out of their comfort zones and focus on possibilities, not problems.

The Feb. 6 program given by Sherrie Dunlevy of Wheeling came as part of the ongoing series at the YWCA of Steubenville. The monthly seminars are geared to women entrepreneurs, women in senior management or women who want to start or are starting a business.

The next one will be held at 8 a.m. on March 6 with the presenter to be announced. For information or to register, contact Sophie Spencer, YWCA executive director, at (740) 282-1261. The e-mail is Steubenvilleywca@comcast.net.

Dunley is an author, speaker and Aging Awesomely coach these days but was known as Sherrie McCutcheon during many years as a local news anchor.

She ultimately wrote a book titled “How Can I Help? Your Go-To Guide for Helping Loved Ones Through Life’s Difficulties” after the death of her 29-day-old son Brandon. Doing that, though, involved stepping out of her comfort zone, battling self doubts and revisiting the desire to do it after shelving the project for many years and many reasons.

“A lot of times we tell ourselves stories that hold us back from what we want to do, and those are lies to keep us in a comfort zone, but the comfort zone doesn’t exist because everything is changing,” Dunlevy said. “You can’t keep things the same. Life is changing, and that’s why we become anxious. That’s why we’re depressed, because we’re trying to keep everything the same while everything is changing, so it’s more about going with the flow,” she said of her talking points.

Her message was one of “changing your mind, opening your heart, opening your mind and trying new experiences and being open to new ideas and people and working on yourself instead of blaming the world for all the problems.”

She said, “Work on how you can make your life better, and every time something comes up that tells you, you can’t do this, instead of looking at the problem, look at the possibilities.”

As an example, not having money to go back to school could be countered instead with how to earn the money, to investigate grants or financial aid, to get a second job or take out a loan. “There are ways, but some times we let the problem hold us, and we’ve got to look at the possibilities. “If you say I don’t have the money to do this, and you stop it, you’re just shutting it down, but if you switch to the possibility, how can I find this money, all of a sudden opportunities will become open for you,” she said.

Or saying you don’t have the time. Counter that, she suggested, with how can I fit this into my life, how can I readjust my schedule to make this work.

Being open to new ideas, things and people who are different than you constituted another tip Dunlevy offered. “We want to stay with the people who make us feel comfortable. Our life becomes small when we stay comfortable,” she said.

Dunlevy shared a story of how she was on a plane, initially hoping the open seat next to her would be taken by someone in her comfort zone.

Instead it was an elderly Hindu man.

“Let me tell you, that was probably the most meaningful flight I have ever taken in my life,” she said. “He is Hindu; I am Catholic; he is a scientist; I am on the artsy side; he is from India; I’m from the valley — the conversation that we had, the soul merging, the openness to me questioning and trying to find out everything I could about his religion, and know what I discovered, we are more alike than unlike,” she said of the experience that involved listening to understand.

Joining Left of Centre Players, a troupe dedicated to performing improvisational comedy in Wheeling, is another example of how Dunlevy said she has stepped out of her comfort zone.

Dunlevy said she is taking classes to become a life coach to help others — “people that are struck, people who want to make changes and want their life to be different from what it is and they just don’t know how to do it. We have coaches at the gym, coaches for everything, but sometimes we need a coach just to give us a little bit of encouragement and a kick in the butt to get going.”

It’s human instinct to be scared to try something new, to talk yourself out of it, according to Dunlevy, who started an all-good-news, inspirational group on Facebook called All Things Awesome.

“But do it anyway, because the payoff will be great. You have to step out of those stories if you ever want to step into your greatness. So count it down, three, two, one, and make the jump.”

Dunlevy said she was scared to write a book and start a new business but discovered something beyond the fear.

“The more that you say yes to life, the more you are being called to something, and the more fear you feel, that is your sign that this is what you should be doing, the path you should be following.”

She identified her main point as “quit letting your stories determine where you are if you’re desiring something more. We all have stories. It can be even something as simple as your weight, or your relationships, it can be anything. It doesn’t necessarily have to be your career. If you want it to be different than what it is, quit paying attention to the stories and get busy on changing it,” she said.