The reception followed at St. Florian Event Center in Wintersville.

The bride is the daughter of Dr. Mark and Kimberly Reed of Richmond.

The groom is the son of Paul and Elizabeth Zdinak of Stratton.

Megan Elizabeth Reed King and Emily Anne Lohrer, sisters of the bride, served as matrons of honor with Chelsea Elizabeth Zdinak, sister of the groom, as maid of honor. Bridesmaids were Ali Reed and Sarah Ross, cousins of the bride, and Alaina McGlone, Arika Coffy, Mikayla Tice and Maryanna Sutton.

Flower girls were Lydia Kenny, Nia Gammalo and Sydney Frampton, all cousins of the groom.

Ring bearers were Calvin Lohrer and Kaelan Reed McGuire, nephews of the bride.

The bride is a 2013 graduate of Edison High School and holds a bachelor’s of science degree in elementary and special education from Franciscan University of Steubenville. She is currently working at Trinity Health System in Steubenville.

The couple have made their home in Stratton and planned on honeymooning in Alaska late last summer, but due to COVID-19, plans were altered. 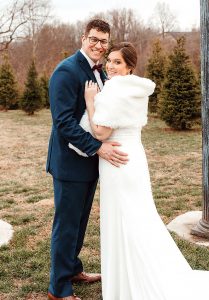 Jenkins: Solution to a Steubenville water problem won’t be cheap

Local teen gets honored for heroism