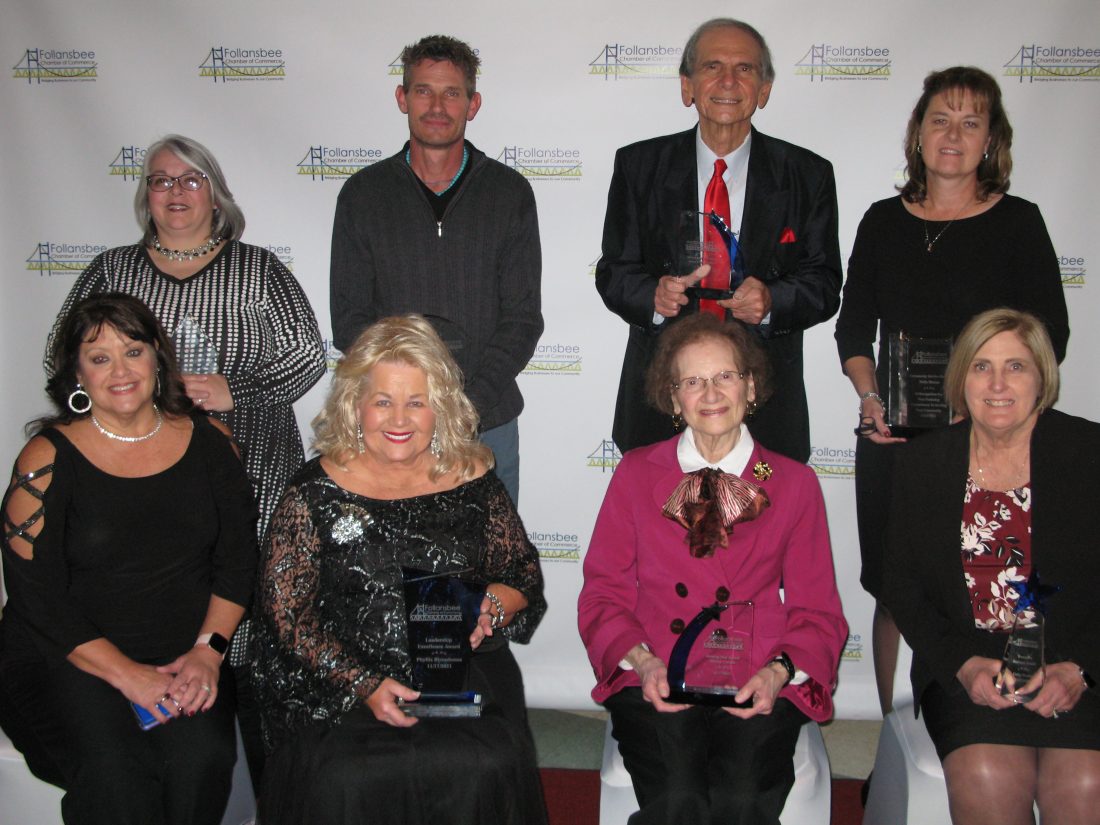 APPLAUDED FOR SERVICE — At its annual dinner Wednesday, the Follansbee Chamber of Commerce recognized several citizens and businesses for their service to the community. The eight and their honors included, from left: Cindy Kocher, Ctiizen of the Year; Phyllis Riccadonna, Leadership Excellence Award; Shirley Cuomo, Shining Star Award; and Catherine Ferrari of Hancock County; Savings Bank, Women in Business Award; and back: Monica Rotellini-Myers of Moe’s on Main, Business of the Year; Tom McGaughey of Hunter Heating & Cooling, Platinum Service Award; Pastor Joe Cuomo of the Christian Assembly of Follansbee, Shining Star Award; and Twila Mezan of the Follansbee McDonald’s, Community Service Award. -- Warren Scott

FOLLANSBEE — As guest speaker for the Follansbee Chamber of Commerce’s annual dinner Nov. 17, Pat Ford said he feels blessed to be a friend of the city because its citizens are there not only when it’s time to celebrate the accomplishments of their neighbors but also to help in times of crisis.

Ford, former executive director of the Business Development Corp. of the Northern Panhandle and current business director for the Frontier Group of Companies, said his father always told him, “God helps those who help themselves.”

He said he believes Jesus Christ’s parable of the talents supports that belief by demonstrating God values those who take risks with their talents when using them to help others.

Ford referred to passages in both Jeremiah and Matthew that describe the less traveled, more difficult path to goodness and suggested the honorees have chosen to follow such a path.

The eight recognized by the chamber and their awards were: Cindy Kocher, Citizen of the Year; Monica Rotellini-Myers of Moe’s on Main, Business of the Year; Pastor Joe Cuomo and Shirley Cuomo of the Christian Assembly of Follansbee, Shining Star Award; Twila Mezan of the Follansbee McDonald’s, Community Service Award; Catherine Ferrari of Hancock County Savings Bank, Leadership Excellence Award; and Tom McGaughey of Hunter Heating & Cooling, Platinum Service Award.

A lifelong Follansbee resident, Kocher has been active in the chamber since joining it 10 years ago, serving on its board of directors and as its secretary since 2017 and working with other chamber leaders to organize many community events and projects.

She has worked in the banking industry for more than 30 years, working her way up from bookkeeper to her current position as manager of the Follansbee branch of First National Bank.

Since 2017 Rotellini-Myers has owned and operated Moe’s on Main, selling a variety of crafts, food and other goods on consignment for about 60 vendors with help from her daughter, Kyrsten.

Last year, when the pandemic spurred a demand in masks, consignors Mary Ross, Erin Irwin, Teri Moran and Carol Boyce stepped up to produce at least 5,711 sold by the store.

As a chamber member, Rotellini-Myers has organized monthly sidewalk sales events aimed at attracting visitors to the city’s downtown businesses.

Joe Cuomo has served as pastor of the Christian Assembly of Follansbee since 2003, having served as assistant to the previous pastor for 18 years.

Through the United in Christ Ministry, the church’s members have supported the Adult and Teen Challenge Center, a faith-based drug and alcohol addiction treatment program; the Follansbee Christian Center, an after-school children’s program at the church; and Ryan’s Prayer of Hope and Healing for Autism, and other community outreach projects.

His sister, Shirley, also has been involved in many of the church’s activities and has served as its pianist, secretary, treasurer and leader of Anna’s Ministry.

She has applied her experience as a former schoolteacher to its Sunday school and after-school programs as well as other volunteer work for the Weirton Christian Center, Brooke County Reading Council and other groups.

During the pandemic, she created handouts with Christian teachings for adults and children who weren’t able to gather at the church or after-school program.

Mezan owns and operates the Follansbee McDonald’s with help from her daughter, Kara Morgan, and through the business, has supported many activities of local schools and other groups.

While overseeing it and three McDonald’s in the Pittsburgh area with about 150 employees, she has made time to serve in the chamber and Wellsburg Kiwanis Club.

The first female president and chief executive officer of Hancock County Savings Bank, Ferrari has worked there for 37 years, serving on its board of directors for 21 years and chairing its charitable foundation, which has awarded more than $225,000 to nonprofit organizations.

She received federal and state recognition as director of the Jefferson County Victims Assistance Program and worked with law enforcement to form the county’s first domestic violence task force.

She has been a state and local leader of Ohio Business and Professional Women clubs and served on boards for the A.L.I.V.E. Shelter, Big Brothers/Big Sisters, Refuge for Women and other organizations.

McGaughey has worked in the field of heating, ventilation and air conditioning for more than 25 years and opened Hunter Heating and Cooling, named for his daughter, in 2008.

He said he strives to treat all of his customers with respect.

Amy Pannett received one to purchase an aquarium and related materials for her kindergarteners at Brooke Primary North to study the differences between goldfish and guppies while caring for them.

And Melissa Zink and Holly Kisner received one to establish an outdoor classroom, including picnic tables, so pupils at Brooke Intermediate North can learn about nature and take in fresh air.

The dinner was Debbie Puskarich’s last as the chamber’s president, though she will continue to serve on its board of directors.