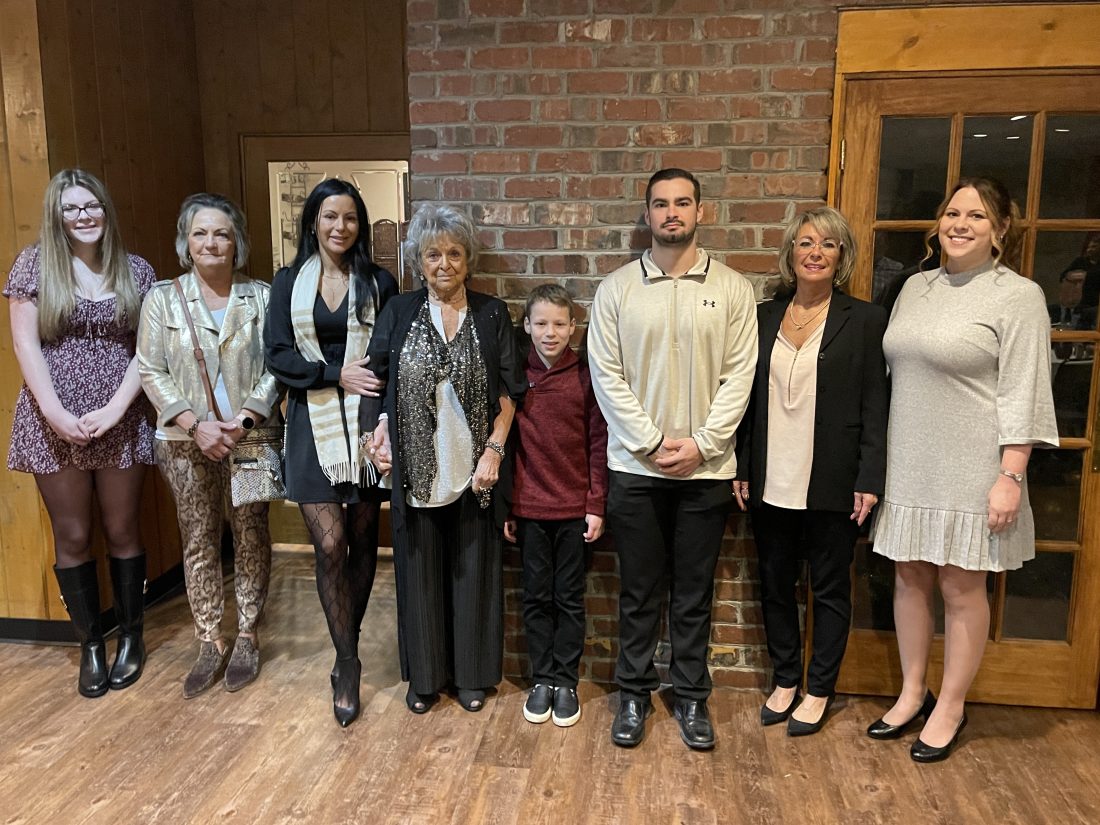 WORK RECOGNIZED — The family of the late Samuel W. Kerr was presented with a resolution honoring his achievements during Thursday’s meeting of the Jefferson County Bar Association at Scaffidi’s Restaurant and Tavern. On hand for the ceremony were, from left, Maddie Kerr, granddaughter; Melinda Humphreys, daughter; Laurianne Smith, granddaughter; Emily Kerr, wife; Samuel Kerr III, grandson; Alex LaRue, grandson; Laurie LaRue, daughter; and Rachel Kerr, daughter-in-law. A longtime local attorney, Kerr served as a judge in the county court system from 1970 until his retirement in 1995. -- Ross Gallabrese

STEUBENVILLE — Members of the Jefferson County Bar Association paused during Thursday’s meeting to remember the life and accomplishments of the late Samuel W. Kerr.

Kerr, who died Jan. 15 at the age of 80, served as a judge in the county court system for 45 years until his retirement in 2015. A proclamation recognizing his achievements “as an attorney, judge, mentor, husband, father and grandfather” was presented to his wife of 47 years, Emily, and members of their family during a luncheon at Scaffidi’s Restaurant and Tavern.

A graduate of Wintersville High School and a member of the school’s undefeated 1957 football team, which was coached by the late Robert Kettlewell, Kerr earned his undergraduate degree from Washington and Jefferson College and his law degree from Ohio State University. He officially became a lawyer in an unusual way — he learned he had passed the Ohio bar exam while serving as an artillery captain in Korea, and received his oath from Lt. Gen. Andrew J. Boyle during a training exercise.

After returning home, Kerr joined the law firm of Quinn, Adulewicz and Kerr. In 1970, he became judge in Dillonvale county court, a post he held until being elected probate and juvenile judge in 1980, a job he would serve in until his retirement in 2015.

Joe Corabi followed Kerr to the bench in the probate and juvenile court and served until his retirement in February, when Frank Noble took over the position.

Noble announced during the meeting that the annual juvenile court steak fry that had been hosted by Kerr will resume this year. The event will include a fundraising component with the proceeds going to some of Kerr’s favorite charities.