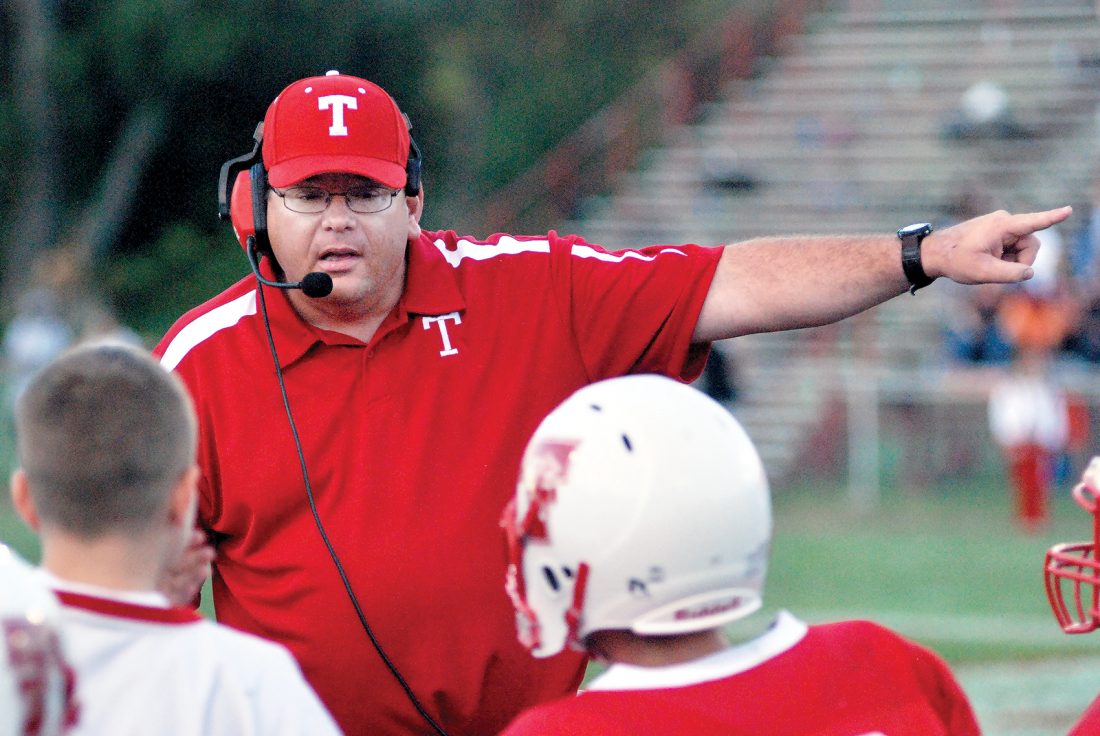 Michael D. McElwain BACK IN COACHING — Eric Meek directs players during the 2016 season at Toronto. The veteran head coach who most recently spent eight seasons guiding the Red Knights was named Catholic Central’s new head coach on Thursday. Meek also coached Weir High to a championship in 2005 and coached previously at Wellsville. He had been working as a radio analyst since stepping down at Toronto after the 2017 season.

STEUBENVILLE — After four years of covering high school football on the radio, Eric Meek realized he “missed the daily interaction” coaches have with their players. So, come this August, he’ll be returning to the sidelines.

“We are very happy and excited to have Eric Meek as our head football coach,” said Mike Barber, Catholic Central’s athletic director. “We are looking forward to a successful season with coach Meek’s experience, leadership, strong faith and great success.”

Meek stepped away from the coaching ranks in early 2018 after leading the Toronto program from 2010-2017. During those eight seasons, he guided the Red Knights to a 48-36 mark and reached the Ohio playoffs four consecutive years. A graduate of Youngstown State University, Meek also served as Toronto’s head coach in 1993 and 1994. He launched his coaching career as a graduate assistant for Jim Tressel at YSU.

From 1995 to 2002, Meek was the head coach at Wellsville before serving as running backs coach at Robert Morris University in 2003 and 2004.

He directed the Weir High program from 2005-2008, leading the Red Riders to the West Virginia Class AA championship in 2005. Meek has an overall head coaching record of 132-100.

“After doing radio for four years, I really missed the daily interaction with kids,” Meek said. “The Catholic Central administration is committed to a first class football program and that’s exactly what are going to have.

“I have never coached before a private school. With Catholic Central being a religious-based institution, I am personally excited to be able to pray and to be able to mention our Lord with our student-athletes. That is a personal thing I am just really excited about.”

Meek replaces Anthony Agresta, who recently stepped down after guiding the Crusaders for three seasons. Pending board of education approval later this month, Agresta will become the new head football coach at Sebring McKinley High School.

“I’m ready to get going,” Meek said. “All those years I coached against Greg Bahen and Steve Daley that Crusader fight song was something I really didn’t enjoy hearing. But the past few days, I guess I have been driving my wife and daughter a little crazy because I have been walking around the house singing. So I am really fired up.”

“We’re asking anyone in grades six through 11 to be in the school’s gymnasium for a meeting at 7 p.m. Monday,” Meek said. “We hope to have as many people who want to be involved with the future of Crusader football attend as possible.

“We’re going to put together a great coaching staff and give our all to Catholic Central. Hopefully, we can make the program stronger each and every day.”

Meek, who was named the Ohio Division VII coach of the year in 2014 and has received many other coaching awards, will continue to teach in the Toronto school district.

“Everywhere I have coached, I have enjoyed it,” he said. “I have met great people along the way and I certainly am looking forward to meeting some wonderful people at Catholic Central.

“Most importantly, and what coaching has always been about for me is to try to lead young men along with their parents and their other teachers and coaches in the right direction. We will work hard to have a program of morals, values and ethics.”

Quiroz go-ahead single in 8th gets Cubs past Pirates

Shenandoah tops BL in a thriller

High-flying Jets too much for Weir