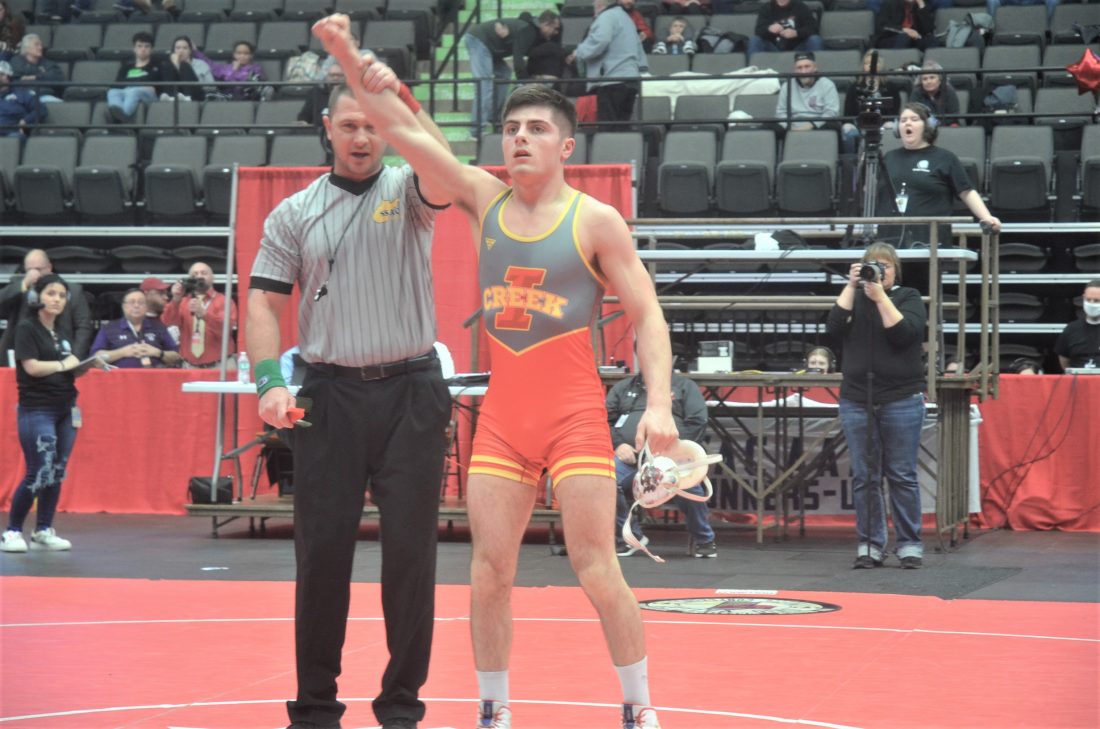 WHEELING — Depth is a vital part of any athletic team. It was a key element Saturday in Wheeling Park ending nearly two decades of frustration at the Ohio Valley Athletic Conference Ron Mauck Wrestling Championships.

With only two individual titlists, the Patriots piled up enough points in the first three sessions to overcome a terrible semifinal showing and then rolled to a convincing, 278-228.5, wire-to-wire victory over runner-up University to win not only the coveted overall team title for the first time since 2005, but also the Class 5A crown as the 68th edition capped its three-day stay inside WesBanco Arena.

“This is a great team to coach. They love wrestling and want to win,” Wheeling Park head coach Brian Leggett said of his squad which also captured the Wheeling Park Duals several weeks ago inside the same building. “We put in a solid two days, but things didn’t go to well early on today. However the kids bounced back and won some big consolation matches for us.”

“It doesn’t surprise me because they are practice partners and they get after it in the (wrestling) room,” Leggett said about Shelek and Lucas.

“Our team is still young,” Leggett added. “We’ve got a lot of freshmen in the lineup that wrestled really well here.”

Steubenville had a pair of titlists in Brody Saccoccia (120) and Peyton Tuttle (285). Saccoccia earned a 7-3 nod over Parkersburg South’s Brent Bosley and Tuttle pinned University’s Corbin Turney in 3:58.

“We knew that one was going to be a battle,” first-year Steubenville head coach Lucas Huffman said of Tuttle’s match. “Peyton wrestled a good, smart match.”

Big Red finished a point behind Parkersburg South (108-107) and finished fourth overall, but Huffman was pleased.

“Brody earns everything he gets,” Huffman said of Saccoccia.

“I’m extremely proud of our team top to bottom,” he noted. “We just asked the kids to go out and compete, and they did. I’m extremely happy.”

Barnesville captured the Class 3A title behind the championship performance of Dakota King (126) who posted a 19-4 technical fall over Steubenville’s Cal Beadling. The Shamrocks also had a runnerup, a third and a fourth.

“We’ve got a good core of kids and battled through some adversity. I’m proud of them,” Barnesville’s Jayson Stephen said. “We came in here thinking we could be a top 5 team and we lost some matches in the ‘blood round’ that we should never lose. That can’t happen.”

The Shamrocks tallied 118.5 points to 97 for runnerup Martins Ferry.

Oak Glen’s Logan Davis (106) got the finals started with a 4-0 blanking of Cameron’s Slaton Pettit.

“Logan wrestled well. He was the No. 1 seed coming in and did what he had to,” Oak Glen head coach Patrick McGillian said of Davis. “He was pretty flawless in the finals. I’m proud of him.”

The Dragons did get a champion in senior Ian Bush (182). The two-time OVAC and two-time defending W.Va. state champion is a WVU recruit. He pinned Cambridge’s Caden Kenworthy in 3:03.

“We knew coming in that we had a pretty good chance at winning our class,” Cameron head coach Tim Jones allowed. “We challenged the kids to show up, and they did. Even the guys that didn’t place fought hard. Definitely a team effort.

“It’s going to be hard when he wrestles his last match for us,” Jones said of Bush, who pinned his way through the tournament to win the Hercules Award. “He is something special.”

Capturing titles for Indian Creek, which finished second to Beaver Local in the Class 4A race, set a school milestone Saturday.

“This was a special weekend for us because we’ve never had two individual champions in school history,” Indian Creek’s Brandon Pendleton said. “This is a good group of guys that we’ve been focusing on doing things for the first time with. I couldn’t be any more proud of them.”

Kazmirski, the fourth seed, made a second-period escape hold up in a 1-0 win over John Marshall’s Ethan Cook. Felix topped Beaver Local’s unseeded Dorian Jackson, 10-3. Ours, who was voted the Bierkortte Award winner by tournament coaches, pinned University’s Dakota Hagedorn in 2:53, and Wright scored a fall in 5:34 over University’s Elijah Wellings-Osha. Thomas shocked a lot of people when he pinned Wheeling Park’s Erick Brothers Jr. in 5:22 trailing 5-2.

“Gannon winning isn’t really a surprise to me,” St. Clairsville’s Joel Sansone said. “When we lost to Cook last week in the finals at Cameron by a 2-1 score in overtime on a fleeing the mat call, I told him he would see him (Cook) next week at OVACs when it matters.”

“Lucas earns every bit of what he got tonight,” Harrison Central’s Bill Bryant said of his third seed. “He works a lot harder and puts more time in in the (wrestling) room than anybody on the team. He puts in a ton of mat time. He traveled this summer to make himself better.”

Thomas is the Huskies’ first champion since Doug Eddy in 2012.