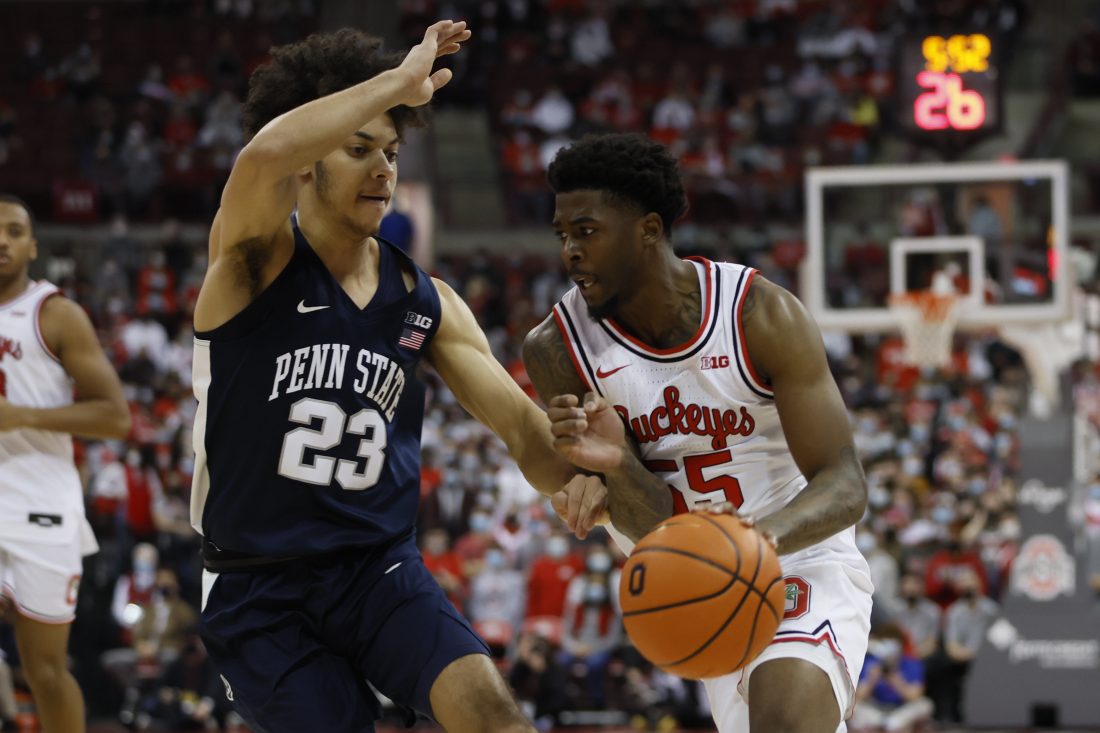 “I didn’t think that Penn State would go away,” Ohio State coach Chris Holtmann said. “They have a strong will about them.”

The Nittany Lions (8-7, 3-4) trimmed multiple 10-point deficits in the second half and pulled within four with seven seconds to go.

Seth Lundy, Penn State’s leading scorer with an average of 14.1 points, missed his first game of the season. The school announced earlier in the day that he was out but didn’t give a reason.

Ohio State’s Kyle Young forced a steal with 1:25 remaining and sank a pair of free throws 20 seconds later to hold off the Nittany Lions. Jamari Wheeler made four foul shots in the final minute.

“It was the play of the game,” Holtmann said of Young’s steal. “It was the difference in a lot of ways.”

“We weren’t as disciplined as we usually are,” Shrewsberry said. “If you want to win on the road against a ranked team, you have to be disciplined, and we weren’t.”

The Buckeyes’ defense allowed their lowest field goal percentage since the 22-day layoff that saw three games canceled due to COVID-19 concerns within the program.

“The biggest thing we got to be able to do is continue to grow in our defensive effort,” Holtmann said. “This was a good step.”

Ohio State swept the season series against Penn State for the second straight year after defeating the Nittany Lions 76-64 Dec. 5, 2021.

Wheeler, who transferred from Penn State after last season, scored nine points in both games against his former team.

“It was special getting the win,” Wheeler said. “We brought the brooms out today.”

For the second consecutive game, the Buckeyes limited their turnover figure to less than 10, committing just nine Sunday. They entered the game with the fifth-worst turnover margin in the Big Ten Conference.

“All our turnovers be something that we can control,” Wheeler said.

Penn State: Without the team’s leading scorer, the Nittany Lions had trouble getting shots to fall. Their 39.6% shooting from the field marked their second-lowest performance of the season.

Ohio State: Coming off their worst 3-point shooting performance of the season after recording a 15.8% clip (3 for 19) in a loss at Wisconsin on Thursday, the Buckeyes took just three shots from distance in the second half. They took nine in the opening period, and went 3 for 12 overall.