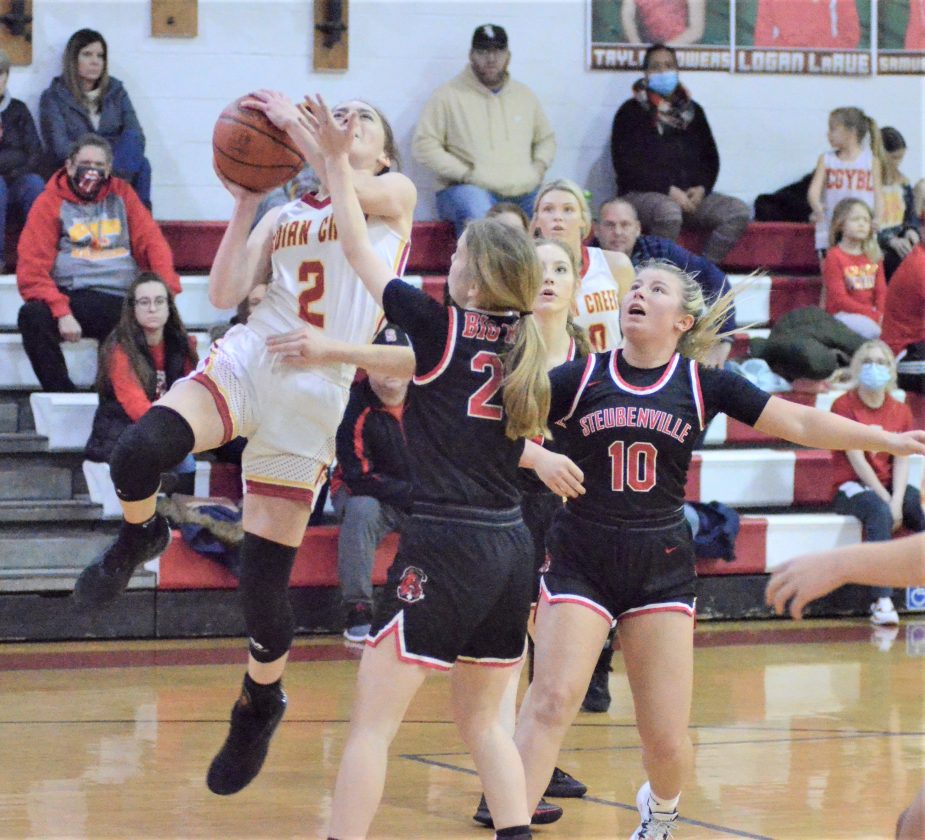 WINTERSVILLE — After what had been a 13-point halftime lead and a 12-point cushion going to the fourth quarter shrunk to just four points, Indian Creek needed someone to make a shot.

Abby Starkey, a junior who entered the season as the most experienced player for the Redskins, was the one who found herself with the ball on a key possession.

Her shot from beyond the arc with just under three minutes to play swished the net, helping clear the way for the Redskins (7-6) to fend off a late charge from a Big Red (1-11) group that would not go away for a 65-57 victory Saturday evening.

“That was huge,” Indian Creek head coach Steve Eft said. “She is our most experienced player, she is shooting at a high percentage. We love having her in that spot. If she is open, she has the green light. That was a really big shot for us.

“We really needed to score on that possession, and for it to be a 3 was even bigger.”

After Steubenville again cut into the lead with back-to-back triples by Maggi Cucarese and Paige Matteson to make it a 59-55 game with 1:31 to go, Tori Robertson and Starkey each drained clutch free throws to push the lead back to the final margin of victory.

“The girls dug down deep and found a way to get this one,” Eft said. “I’m super proud of them.”

McKenna Scott racked up a game-high 22 points for Indian Creek, while dishing a game-high seven assists.

“She has been battling, she has been sick and working her way back,” Eft said. “She looked like she had her legs under her a little more (Saturday).”

Big Red’s comeback bid was sparked by the sharp-shooting of Madalyn Criss, who drained six shots from beyond the arc and finished with 21 points while also dishing four assists.

“The girls played hard,” Big Red head coach Angi Forte said. “We talked about some things in practice about what it takes to get to the other side, to be able to compete. They listened, we made some adjustments and they did not give up.

“We have things we still have to fix, but we’re still working hard. We went up against a good team. Steve does a great job with his young ladies and getting them to buy into his system, and it shows.

“We just have to keep battling and keep improving and eventually that is going to turn into wins.”

“We didn’t locate their shooters enough in the second half,” Eft said. “Their girls stepped up and made shots. You have to give them and coach Forte credit, she is doing a really good job with them and they are still playing hard despite their record.

“They are still in it, still responding to her and playing hard. They’re getting a lot better.”

Creek had four players reach double figures as Scott’s big night was followed by Starkey with 13, Tori Robertson with 11 and Kylie Anderson came off the bench and netted 11 and pulled down a game-high eight rebounds.

Creek started things off fast, scoring the game’s first six points off of turnovers. Criss nailed her first triple to cut the lead in half, and Big Red hung within 17-13 at the end of one, however.

The start of the second is when the Redskins started to put some distance between themselves and the visitors, as they started with a 14-2 run to go up by 16.

Big Red rattled off six-straight to get it back within 10, but Creek quickly answered with the next seven points and carried a 13-point advantage to the break.

The Redskins maintained that margin or more for much of the third, though they started to turn the ball over at an alarming rate (the teams combined for 55 turnovers), before a Criss triple at the third quarter horn made it a 49-37 game after three.

Criss and Cucarese drained treys on consecutive possessions for Big Red to make it a seven-point game, and back-to-back buckets by Sabria Jones and Aniyah Warner later cut the lead to five for the first time since Creek’s second quarter run with just under five minutes to go.

Thanks to Starkey’s triple, Creek pushed the lead back to 10, and Big Red was never able to make it less than a four-point deficit the rest of the way.

“It definitely got sloppy at times, but the girls kept battling,” Eft said. “We have been stressing to them that you have to have the next play mentality and you can’t let things snowball. One mistake can’t lead to two. We got down on ourselves a little more than I’d like, but overall, we continued to battle and fight through it.

“I hope it is a sign of us growing up and maturing as a team. As long as we continue to work hard and get better, I like the direction we’re headed for sure.”

After going on a five-game skid earlier this season and coming off a tough loss Thursday to Harrison Central in a game that decided the Buckeye 8 North, it was important for Creek to get back on track.

“This was huge for us,” Eft said. “We stressed to them (Friday) getting ready for this game that we have to bounce back. Life is hard, things happen, things are not always going to go your way, but you have to keep playing hard and keep moving forward.

“I was really happy with the way we came out ready to play.”

Indian Creek: Is slated to travel to Carrollton today, weather pending. If the anticipated snow prevents the trip, the Redskins next game would be Wednesday against St. Clairsville.