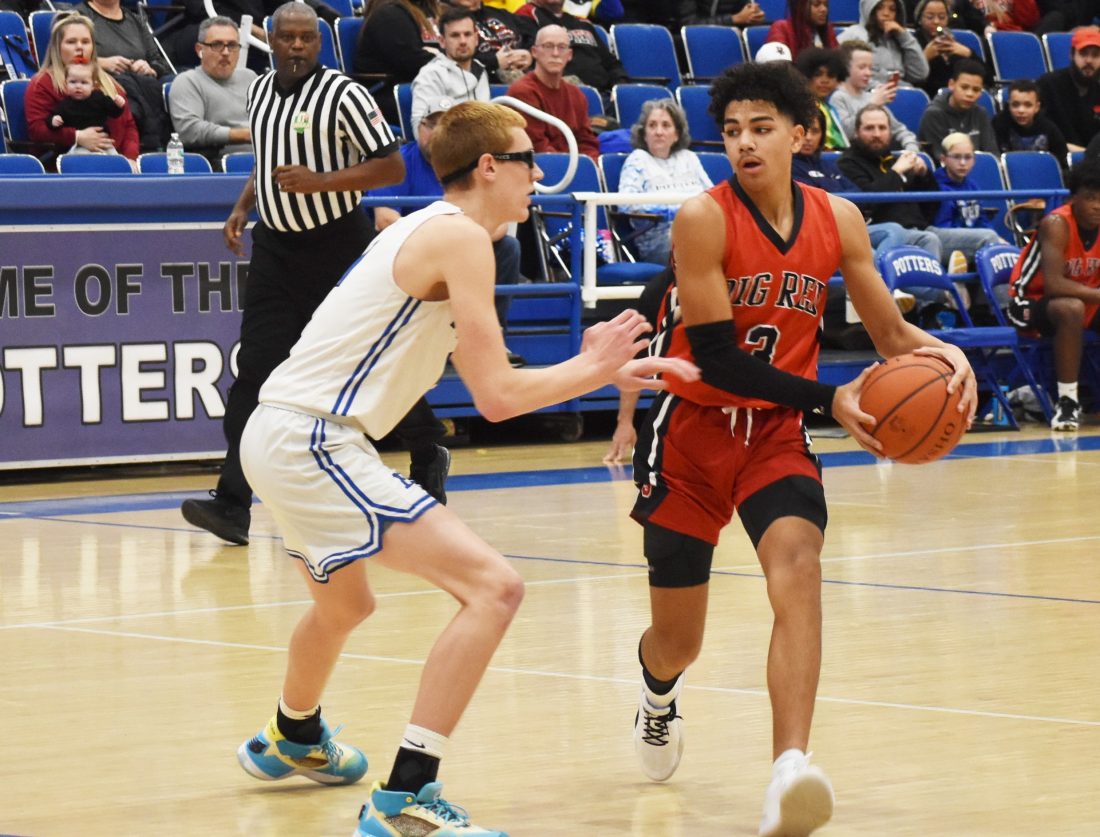 EAST LIVERPOOL — Steubenville’s boys basketball team gave East Liverpool all it could handle in the first half of Friday night’s game.

But, in the second half the Potters turned on the jets en route to a 64-40 win over Big Red.

Big Red’s Ivan Buggs scored all seven of his points in the first half and Phaeton Hill drained a pair of shots from downtown before the intermission.

Steubenville only trailed the Potters by one at the break, but then East Liverpool (11-2) got back to playing fast, transition basketball.

With Cole Dailey scoring 14 of his 19 points in the second half and Trey Armstrong punishing the Big Red defense with 10 third quarter points, there was nothing East Liverpool couldn’t do.

“I thought all game we played great defense. We got out and we ran. When we were able to get stops, we were so fast in transition,” East Liverpool coach Nate Conley. “I thought the ball moved today and everyone contributed. That’s some of the best basketball we played all year.”

Dailey added that his Potters wanted instant offense, which began on the glass in the second half.

“In the first half, we were kind of slowing the ball down. In the second half, it was more like get the rebound. Boom, boom, get up the court and get wide-open layups,” he said.

The Potters’ defense also held Steubenville to 15 second half points.

Dailey thought East Liverpool prepared well and acknowledged this was a unique victory.

“At practice we were talking about getting the ball in the post and get the guards in play. It’s not often you beat Big Red that bad, because it’s always a tough game,” Dailey said.

Steubenville coach Mike Haney thought his squad made too many mistakes against the Potters.

“In the first half, we turned the ball over a little too much. We were flying around and playing defense,” Haney said. “We were flat in the third quarter and we didn’t get back on defense. We gave up a lot in transition and our offense was stagnant. They’re too good of a team.”

East Liverpool has been battle-tested this season and even more so in the past week.

Next on the schedule for East Liverpool was Wheeling Park on Saturday.

“They’re one of the best programs around. They’re a big school. I told my team we’re going to have to start preparing tonight,” Conley said. “We’ll enjoy this a little bit, because we’ve had some battles with Big Red. I didn’t see this coming (margin of victory), but I’m glad it happened.

“I don’t think we played good at Beaver Local and we definitely didn’t play good at New Philly. It was nice to be back home. We’ve been on the road a lot.”

The Potters have been on the road five of their last seven games.