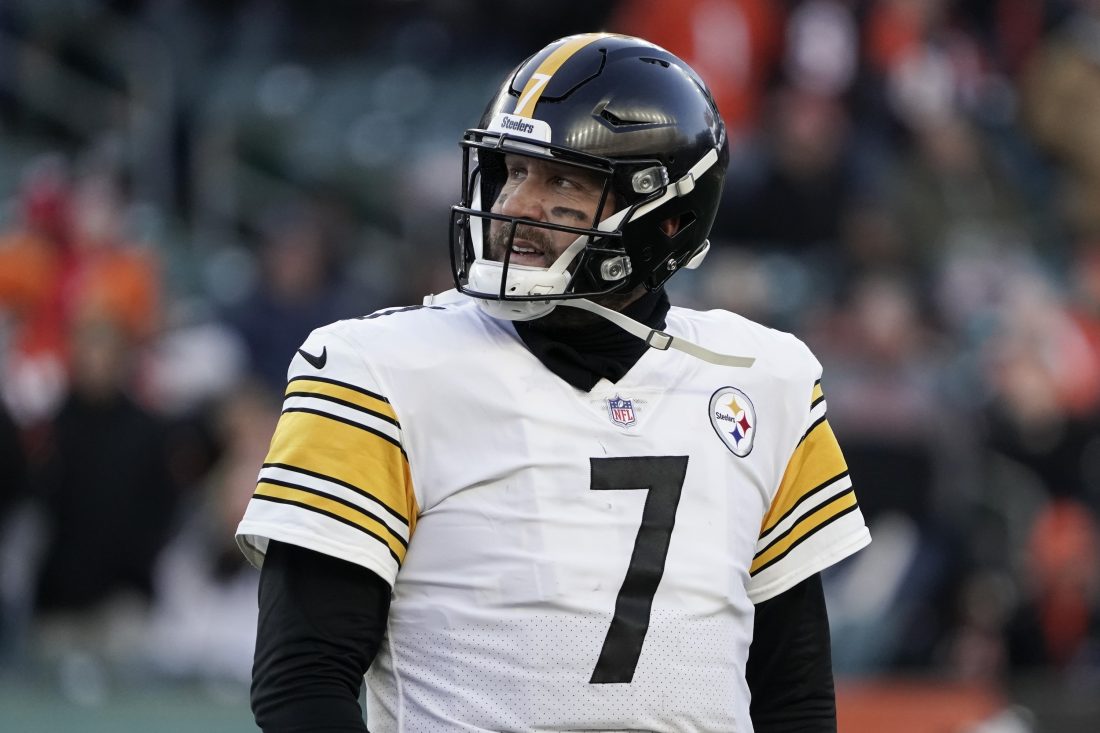 Pittsburgh Steelers quarterback Ben Roethlisberger (7) looks up toward the scoreboard as he leaves the field after losing to the Cincinnati Bengals in an NFL football game, Sunday, Nov. 28, 2021, in Cincinnati. (AP Photo/Jeff Dean)

PITTSBURGH — Ben Roethlisberger learned early the perks of a music-free locker room, namely the ability to absorb what he could whenever Pittsburgh Steelers icon and Hall of Famer Dan Rooney would pop in to take the pulse of the team and offer advice and insight on everything and anything.

“You wanted to listen to him,” Roethlisberger said Wednesday. “You want to hear what he has to say, whether it was about Steelers, about life, just about whatever. I mean, he was like a grandfather to all of us.”

There are still times when Roethlisberger half-expects to see Rooney, who died in April 2017, to walk through the door.

“You just wanted to listen to him because he was so soft-spoken, but he was so wise,” the longtime quarterback said. “And so that was always my thing of why I didn’t want the music because you never had it when he was around.”

Times change. Players too. Roethlisberger is one of just five Steelers who were on the roster in 2016, Rooney’s final season with the team. While the 39-year-old Roethlisberger is doing what he can to pass down the lessons he absorbed, he worries about it getting lost as the years wear on.

A full decade older — at least — than the vast majority of his teammates, Roethlisberger understands there’s a chance the sense of history and tradition Rooney imparted to him as a fresh-faced rookie in 2004 will fall on increasingly deaf ears.

“You can only tell those guys those stories so much before they’re like, ‘OK, this is someone just talking,’ kind of thing,” Roethlisberger said. “You can pass on tradition all you want, but the further you get away from something, the harder it is to do.”

In a way, Roethlisberger sounds like some of the guys he used to work with or who wore Pittsburgh’s familiar black-and-gold long ago, guys who have publicly vented about the state of the franchise following an ugly stretch that included a comical 16-16 tie with Detroit and an embarrassing blowout loss to Cincinnati last week that dropped the Steelers to a pedestrian 5-5-1 heading into a visit from AFC North-leading Baltimore (8-3) on Sunday.

Rocky Bleier, the Vietnam veteran turned running back who won four Super Bowl rings as part of the Super Steelers dynasty of the 1970s, chastised the current group for a “lack of pride and self-esteem.” Ryan Clark, a safety turned NFL analyst, blasted his former team, saying “no one is scared” to face a defense that ranks 25th overall and was pushed to the outer reaches of Paul Brown Stadium last week in Cincinnati.

While linebacker T.J. Watt and defensive end Cam Heyward pointed the finger at themselves — with Heyward bluntly offering Pittsburgh might not win another game this season if the various issues the perennial playoff contenders are facing aren’t fixed, and fixed quickly.

“Claypool plays wideout and I’ll let him do that,” Tomlin said. “I’ll formulate the practice approach. And I think that division of labor is probably appropriate.”

Tomlin consistently reminds his team to mute outside noise both in good times and bad, though he admitted it can be more difficult to tune it out when the noise is coming from players associated with the standard he knows it’s his job to uphold.

While stressing he hadn’t heard specific criticism, Tomlin pointed out former Steelers players “probably have a better understanding of that (standard) than anybody that’s not in (our locker) room right now.”

Roethlisberger allowed history may be repeating itself in a way, and that whatever perceived shift he senses in the locker room is probably the same shift the veterans feared when he pulled over his now-familiar No. 7 for the first time.

“There are probably some veteran guys that I played with that watch us or hear the people talking in the media or some of the things that happen, and probably shake their heads and say, ‘Man, that’s not the Steeler Way. That’s not the way that we used to do it,'” he said. “That’s just the way things go, and I’m sure the (19)70s team probably looked at us even 10, 20 years ago (and thought that) … It just happens.”

And there are plenty of reminders of the franchise’s history, whether there’s music in the locker room or not.

“You walk past (six Lombardi Trophies) every day, you walk by the team, pictures of the guys who did it and that’s who built the franchise,” said linebacker Joe Schobert, acquired in a trade with Jacksonville in August.

Roethlisberger is in two of those photos, one of the reasons he tries to keep a big-picture perspective. The core of the team he joined in 2004 — the one retired players might have had an issue with at the time — played with the same focused ferocity of the famed “Steel Curtain”-led championship groups decades earlier.

Maybe it will one day be the same for this group, which is why Roethlisberger has dropped the “get off my lawn” act.

“The last couple of years I just kind of relented,” he said. “I’ll stop being the grumpy guy. If they want to listen to music, they can listen to music.”

While still hoping the faint echoes of the education Rooney gave — on life, the NFL and “The Steeler Way” — seep into the silence.