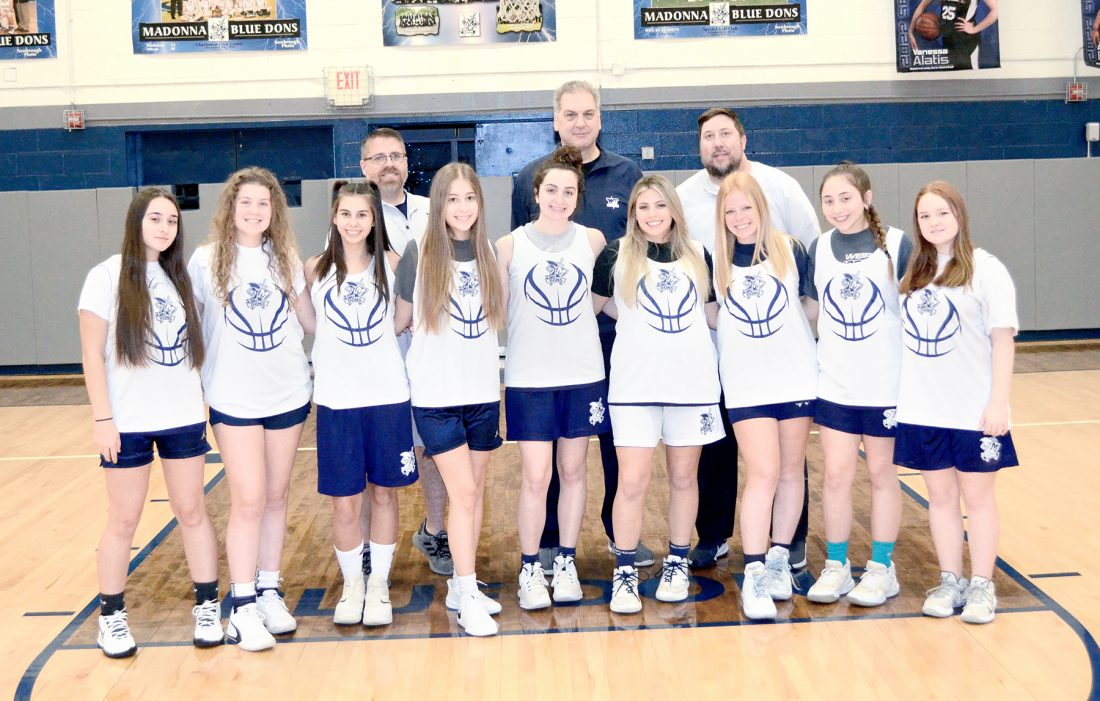 WEIRTON — After a slow start and dealing with everything that the COVID-affected season entailed a year ago, the Madonna girls basketball team made a run to the Class A state tournament in 2020.

This season, with a cast of fresh faces, second-year coach Cory Wingett hopes the lessons learned from that experience and leadership of the departed seniors can lead to another successful season for the Blue Dons.

“Last year was a very successful season,” Wingett said. “We started somewhere around 2-6 and really found our stride in the middle of the season. Obviously, with the schedule being changed dramatically, and not being able to play Ohio teams, we played a lot of schools that are a lot larger than us.”

This season, the schedule is back to a lot more of “normal” after the season was delayed due to COVID-19 restrictions in 2020.

“It’s extremely satisfying to be back to something more normal, I’m very happy for the kids,” he said. “It was so hurtful last year, because on both sides of the Northern Panhandle, they were playing winter sports. Any night of the week we could go to Ohio or Pennsylvania and watch teams we compete with play, and we didn’t know if we were even going to get to play at the time.

“We had eight seniors last year. It’s all about the kids, that is why we do what we do. I just wanted them to be able to compete and I’m glad they got to and things are more normal this season.”

Melnyk and Moore are currently playing at the college level.

Despite the loss of such a large group, Wingett is happy with the overall numbers the team has this season, all things considered.

“We had 15 last year, and with so many graduating, obviously there was concern about numbers,” he said. “We’re happy to say we’re at 10. Over the summer we had 5, 6 7 at summer ball, and picked up a couple more when school started.

“Ten sounds like a small club but we’re very happy with it considering how many seniors we graduated.”

Despite losing a large class, four players that played varsity roles a season ago are back. They are starting senior guards Anna Backel and Vanessa Alatis, both of whom started every game for the Dons a season ago, as well as juniors Shea McCoy and Julia Wingett, each of whom were in the top-8 rotation for the Dons.

“Those two seniors may not leave the court, and we’ve told them that,” coach Wingett said. “They have been a part of the program since they were freshmen, they started on the jayvee team and got varsity time as freshmen. If you were putting it in college terms, they are almost like fifth-year seniors.

“They have been around the varsity program for a long time. We know what we can expect from them and what we need them to do to lead us.”

Joining the mix in key roles will be a pair of sophomores in Mia Pietranton, who dressed varsity and got a lot of jayvee time as a freshman, and Katie Costa, a newcomer to the program. Olivia Bain, a returning junior, is also in the mix.

“We’ll be depending on that group to support our seniors night-in-and-night-out,” coach Wingett said. “We’re going to get better as we go and get more and more experience. We only got to have one scrimmage due to a cancellation.

“We talk about the season being building blocks, whether we start 0-5 or 5-0, we’re still going to have the same goals and the same mindset to get where we need to be at the end of the season. Last season was the perfect example, starting slow, finding our groove and making a run to Charleston.

“Experience and games played with this young group is going to be extremely important so they can gain confidence in themselves and gain their own identity.”

While last year’s team set the blue print, Wingett wants the 2021 version to be its own group and not too focused on trying to live up to the accomplishments of the past.

“Each club is their own,” he said. “We definitely talk a lot about history and tradition at Madonna, because there has been a lot of success in a lot of sports. But, that doesn’t come without hard work. So, this team has to find that groove, that effort, that hard work game-in and game-out, practice-in and practice-out, and allow themselves to develop their own success.”

The goals are lofty as always for the Dons, though.

“Finishing strong, catching fire at the right time, knocking off a couple teams and ending up back in Charleston is also a goal.”