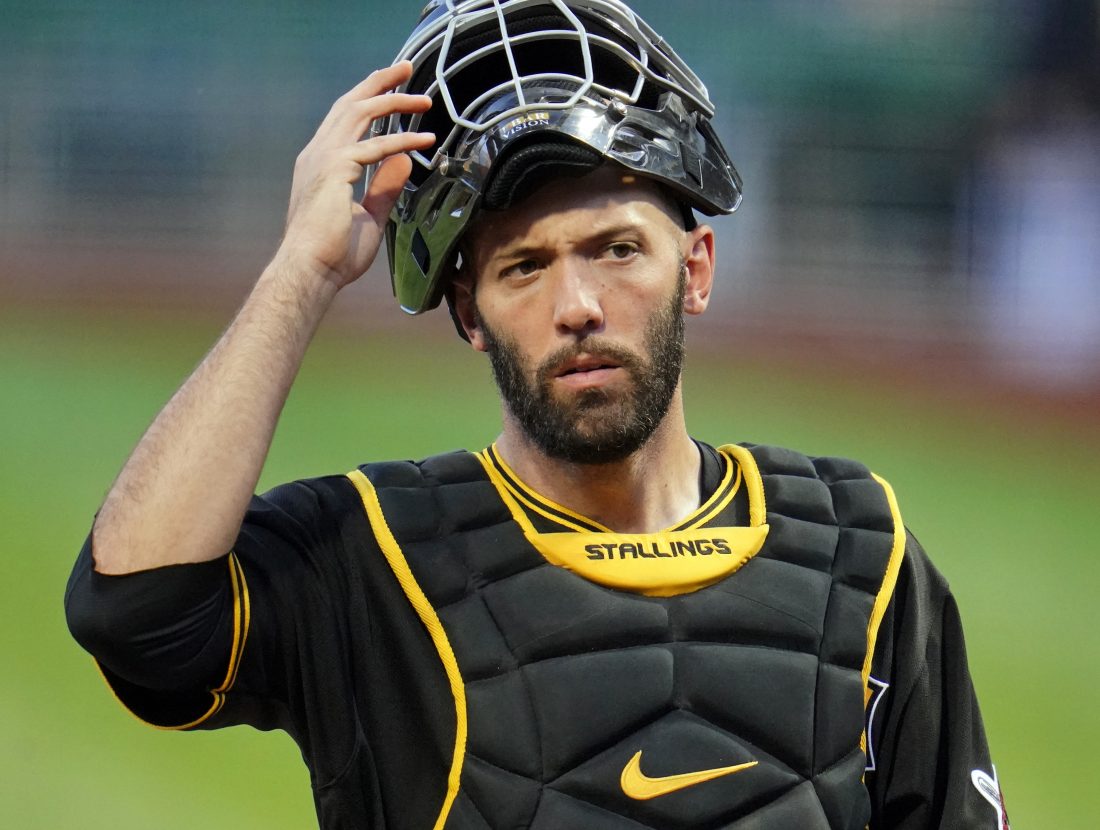 FILE - Pittsburgh Pirates catcher Jacob Stallings catches during a baseball game against the Chicago Cubs in Pittsburgh, Sept. 28, 2021. Stallings, who won a Gold Glove in 2021, was traded to the Miami Marlins on Monday, Nov. 29, 2021, in exchange for reliever Zach Thompson and two prospects. (AP Photo/Gene J. Puskar, File)

The Marlins acquired Stallings from the Pittsburgh Pirates on Monday in exchange for pitcher Zach Thompson and prospects Kyle Nicolas and Connor Scott.

Stallings, 31, is coming off the best season of his career. He earned his first Gold Glove for his handling of an inexperienced pitching staff that ranked among the worst in the major leagues while hitting .246 with career-highs in home runs (8) and RBIs (53) in 112 games.

Stallings joins a team that is trying to elbow its way into contention in the NL East. Miami signed outfielder Avisail Garcia to a five-year deal worth $56-million and agreed to terms with pitcher Sandy Alcantara.

Stallings finds himself going from handling a staff that pitched to a 5.08 ERA — 28th in the majors — to one that posted a respectable 3.98 ERA and is anchored by Alcantara.

The Pirates signed veteran left-hander Jose Quintana to a one-year contract Monday, hoping he can steady a pitching staff that ranked as one of the worst in the majors in 2021.

Quintana is 83-80 with a 3.84 ERA in 10 seasons with the Chicago White Sox, the Chicago Cubs, the Los Angeles Angels and San Francisco. Quintana split time between the Angels and Giants in 2021, going 0-3 with a 6.43 ERA in 29 combined appearances.

The rotation around Quintana in 2022 remains very much a work in progress, with Mitch Keller, JT Brubaker and Max Kranick likely to be in the mix.

The Pirates also came to terms with outfielder Ben Gamel, signing him to a one-year deal worth $1.8 million, with an additional $100,000 in performance incentives available if Gamel makes 450 and 550 plate appearances.

Gamel hit .247 with eight home runs and 26 RBIs in 111 games for the Pirates, primarily playing left field. He is the second position player re-signed by Pittsburgh over the last week. The Pirates agreed to terms with first baseman/outfielder Yoshi Tsutsugo on a one-year, $4 million deal last Wednesday.

To make room for Quintana and Tsutsugo on the 40-man roster, Pittsburgh designated left-hander Steven Brault and first baseman Colin Moran for assignment.