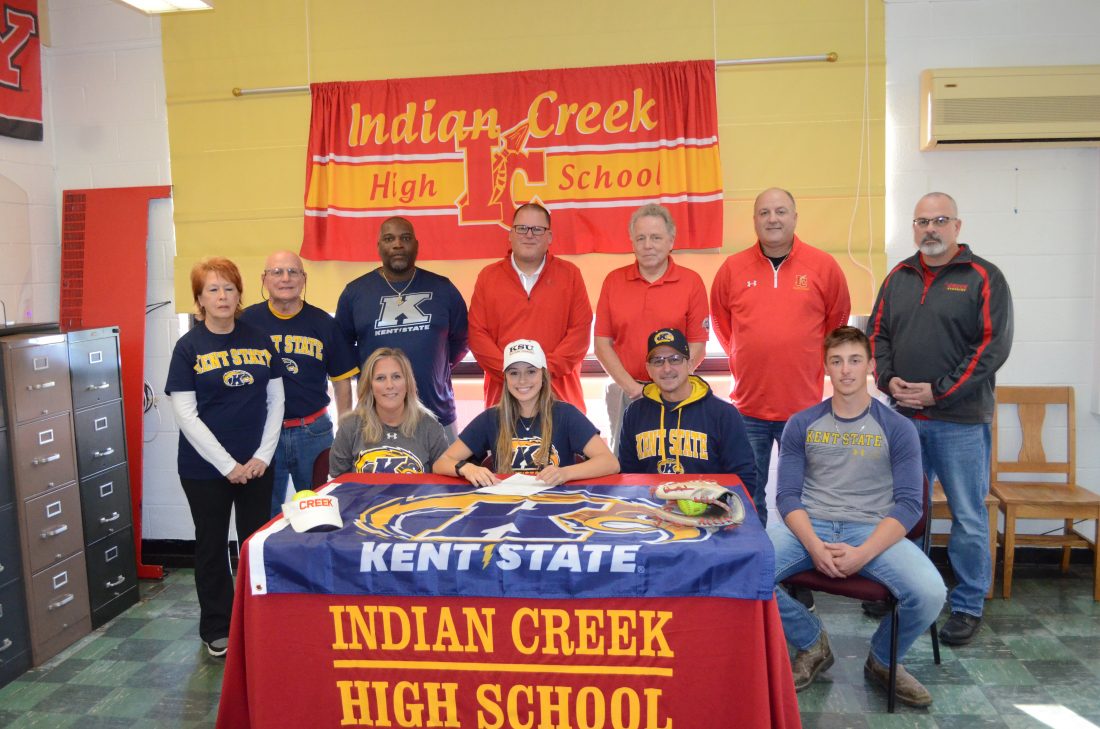 WINTERSVILLE — Any time a coach sees one of their players get the chance to reach the Division I level, it is a special day. When that player happens to be that coach’s own child, it’s a whole new level of special.

Indian Creek head softball coach Angie Penner got to experience that on Wednesday when her daughter and standout player for her Redskins, Carley Jo Penner, singed her letter of intent to play softball at Kent State University.

“It’s a special day,” coach Penner said. “It is bittersweet. On the coaching side, we have had lots of girls go to college to play softball, so I am proud of the program that we have established. But, on the mom side, it is pretty overwhelming to say the least.

“She has put a lot of hours in. There have been some days I have had to say, ‘OK, you need a break.’ She is just at it all the time and she has made really good choices on and off the field.

“This is a really, really proud day for our family.”

Carley, a First Team All-East District, All-OVAC and All-Buckeye 8 selection last year, set the school record for stolen bases in a season with 34, beating her own mark of 27 in 2019, while batting .422. She batted .500 as a freshman and was an East District second-teamer and Buckeye 8 selection in 2019 as well.

“My work has finally paid off,” Carley said after officially signing with the Golden Flashes. “I’m grinding every day and worked hard to get here, and it’s finally here.”

As for what drew her to the Golden Flashes, she had a few reasons.

“I love the culture of the school, I love the great facilities and the program coach (Eric) Oakley has built,” Carley said.

At Kent State, she looks to play outfield and major in exercise science

In addition to her high school accolades, Carley was recently selected for the USA Softball Ohio Region 2 18U team.

“She didn’t get to this point by herself, she got here with numerous people helping her along the way,” coach Penner said. “Our administration, teachers, other coaches, her volleyball coaches, travel ball coaches … there are so many people to thank that I can’t name them all.

“Now the hard the work is just beginning.”

From the coaching standpoint, having another player reach the D1 level is a big boost.

“It is great for the program,” coach Penner said. “It is great for leadership. It shows the girls that if they have desires to play college softball, their hard work and perseverance pays off. That is what we like to promote in our program.”