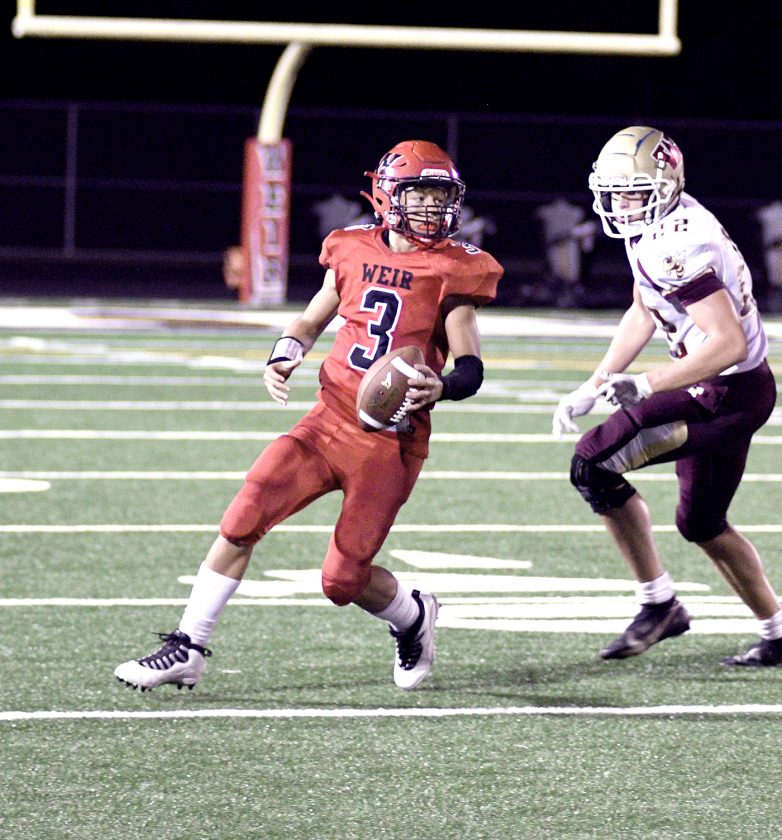 ON THE ROAD AGAIN — Malachi Stromile and the Red Riders head to Albert Gallatin in Uniontown, Pa. on Friday looking to get back in the win column. - Michael D. McElwain

UNIONTOWN, Pa. — Weir High has played a tough schedule this season. This week, that trend continues. The Red Riders will travel to Uniontown Friday night for a meeting with 4-2 Albert Gallatin.

“They’re a 4-2 team that are playing really good football right now,” Sisinni said of the Colonials. “They just played University who is ranked (in W.Va. Class AAA) pretty tight this past week.

“They are an independent team that used to be a part of WPIAL and ventured out to play teams from Maryland, obviously Pennsylvania and a couple of West Virginia teams, of which we are one.”

The Colonials have a stout ground attack, averaging 227.8 yards and three scores per game, compared to just 41.3 yards passing.

Bruno Fabrycki is the team’s leading ball carrier, with 476 yards and five TDs. Caleb Matzus-Chapman is one of AG’s quarterbacks and has added 332 and four scores on the ground to go with 58 pass yards and a score.

Fabrycki also leads the team in receptions with five for 97 and a score, whole Matzus-Chapman can catch, too, with four grabs for 65 and a score.

“They are physical up front, they have a nice-sized fullback that they use to establish the run,” Sisinni said. “They run a lot of rocket-toss to get the perimeter, and when they want to run right at you, they use their fullback.”

If the Colonials were a West Virginia team, they would be in Class AAA.

“It’s another challenge for us for sure,” Sisinni said. “They are going to be a very formidable, tough opponent for us.”

On their end, the Red Riders have had to contend with a lot of different things this season which is off to a 1-5 start.

“We’re at a point where we’re always developing as players,” Sisinni said. “At times there are a lot of moving parts throughout the week with quarantines and protocols and things like that, but there are a number of areas that we need to improve and we are working on that day-in and day-out.

“We’ve been working to get better since Day 1, our coaches are coaching our young kids up and we’re seeing the results early in games. Then, it kind of hits a wall. Our lack of physicality tends to get in the way and it’s hard to make things happen.”

The goal for Sisinni and company, as the Red Riders get into the second half of their schedule, is to put a complete game together, as he has seen his team play well in spurts.

“We’re working daily on trying to put a whole 48 minutes together,” he said. “The last few, we have come out and played well in the first quarter, even going back to Martins Ferry we played three good quarters.

“Last week we started good in the first quarter and into the second quarter. We’ve got to do better in the third and fourth quarter of our games. We have got to get the point where we establish things early and we’re not in chase mode so we get ourselves some confidence, especially with a young group.”

The key against a big, physical team will be keep the offense on the field.

“We have to control the clock, keep the clock moving and not make mistakes and turn the ball over,” Sisinni said. “For us, it’s about fundamentals and sustaining our drives.”

The Red Riders average 201.5 yards and 13.2 points, while Albert Gallatin allows an average of 14 points per game.

Leading the Red Riders so far is Corey Lyons with 314 rush yards and four TDs, while Malachi Stromile has thrown for 457 yards and two scores. Lyons has nine catches for another 193 and a score, while Carson Yobaggy has 12 catches for 190 yards and two TDs.

The kick Friday at the Albert Gallatin Athletic Facility is set for 7 p.m.