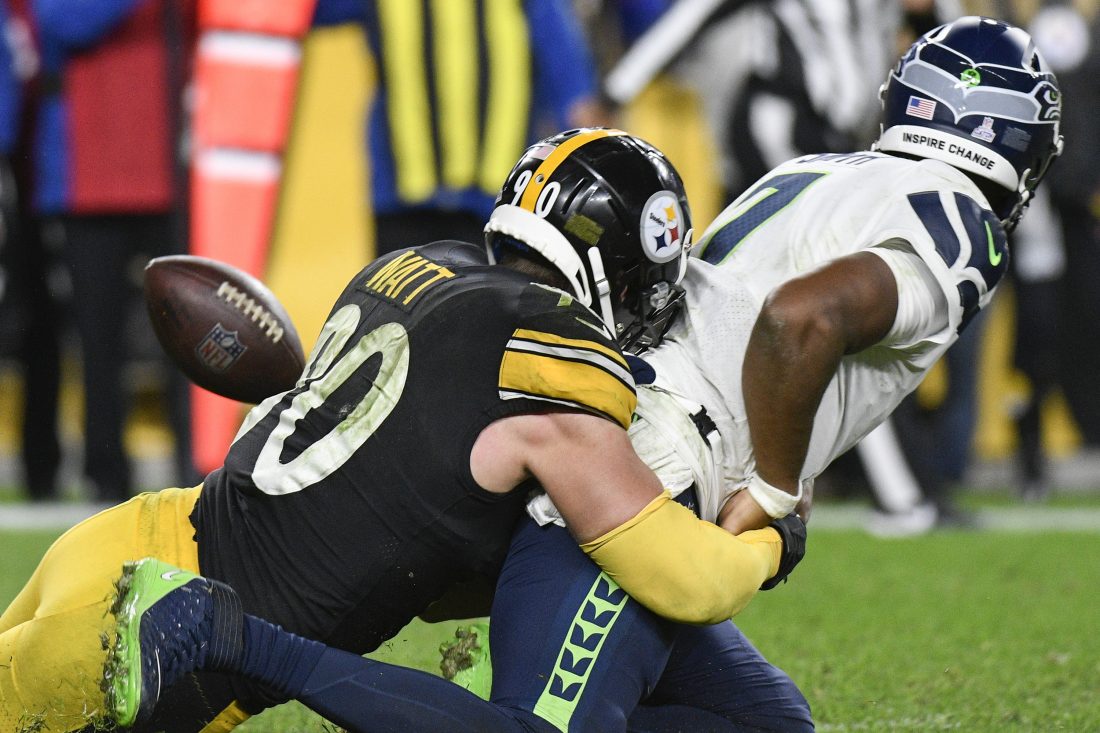 PITTSBURGH (AP) — Pittsburgh Steelers linebacker Devin Bush scooped up the loose ball and amid the chaos, immediately started running in the wrong direction before finding his bearings.

How very fitting for a team that’s spent its first six weeks trying to figure things out.

And while the Steelers remain very much a work in progress, they head into their bye week at 3-3 following a 23-20 overtime victory over Seattle on Sunday night, a victory created when outside linebacker T.J. Watt strip-sacked Seahawks backup quarterback Geno Smith and Bush pounced on it to set up Chris Boswell’s game-winning field goal.

The offense is still a bit of a mish-mash. The defense can look pedestrian, particularly against the run. Yet Pittsburgh has steadied itself and now has two weeks to get ready for a trip to banged-up Cleveland.

“We know we’re not a perfect team but who says we have to be perfect?” defensive end Cam Heyward said. “We’ve just got to get the Ws.”

By any means necessary. The current iteration of the Steelers looks an awful lot like the 2019 group that relied on defense and turnovers to stay in the playoff mix until late December even with quarterback Ben Roethlisberger out with a right elbow injury.

The difference this time around is that Roethlisberger is very much in the mix, even if the 39-year-old has been spotty at best in the early stages of his 18th season. He completed 29 of 40 passes for 224 yards with a touchdown against Seattle, relying heavily on check-downs against the NFL’s worst defense.

His fourth-quarter fumble gave the Seahawks the ball in Pittsburgh territory and an ill-advised pass intended for Diontae Johnson would have been picked off if Seattle safety Jamal Adams was paying attention when the ball smacked off his helmet.

Ultimately, however, it didn’t matter. Rookie running back Najee Harris had 127 total yards and Watt’s heroics in overtime provided the difference. While Roethlisberger admits the Steelers are still searching for an identity, he hinted they may be close to finding one.

The bye will give Roethlisberger and his teammates time to catch their breath. Right tackle Zach Banner is nearing a return from a torn ACL in his right knee sustained in the 2020 season opener against the New York Giants. Defensive end Stephon Tuitt is on the mend after knee surgery, a development that would give a run defense that was gashed by the Seahawks in the second half a serious boost.

As ugly as it was at times on Sunday night in nearly letting a 14-point lead slip away, Pittsburgh survived. Two weeks removed from a loss at home to Cincinnati, the Steelers are .500 heading toward Halloween.

“Considering where we were, it’s the best we could do,” Roethlisberger said.

Paying T.J. Watt. The Steelers made Watt one of the NFL’s highest-paid defenders on the eve of the regular season, and he’s proven worthy of the investment. His two sacks in overtime boosted his season total to seven and his emotional play has given a defense that has looked ordinary at times a much-needed dose of swagger.

“When we needed it the most, (Watt) made his plays,” Heyward said. “What an emphatic play to end the game with a sack-strip fumble. We needed it, and he’s a hell of a player.”

Pittsburgh has allowed 100 yards rushing in four of six games and 9 of 11 overall going back to last season. Despite cramming the line of scrimmage while basically daring Smith to pass, the Steelers spent much of the second half getting mauled by a Seattle offensive line that created plenty of running room for Alex Collins. A slew of missed tackles in the open field didn’t help.

Rookie cornerback Tre Norwood is looking like a steal. Taken in the seventh round of the draft, Norwood has impressed when given playing time. He made a couple of standout plays against the Seahawks, including a crunching tackle on massive Seattle wide receiver D.K. Metcalf, who was limited to six receptions for 58 yards.

Wide receiver Chase Claypool figured to be the biggest benefactor of the right shoulder injury that ended JuJu Smith-Schuster’s season. Claypool did little on Sunday night. He caught just two of the seven passes thrown his way for a paltry 17 yards and was flagged for offensive pass interference in the fourth quarter. Claypool can dazzle at times, but consistency continues to be an issue.

Rookie left tackle Dan Moore Jr. left in the fourth quarter with a hip injury. Moore’s time as a starter might be ending anyway with Banner likely ready to be in the lineup against Cleveland, which would free Chuks Okorafor to move from right tackle back to left tackle, as was the original plan heading into the season.

1: the number of players in NFL history (Watt) with two sacks and a forced fumble in overtime since the league started tracking sacks in 1982.

A chance to get some rest before heading to Cleveland to face the banged-up Browns and perhaps gain a measure of revenge after Cleveland drilled the Steelers in the first round of the 2020 playoffs.