Those around him react to Saccoccia’s ‘mind-boggling’ achievement 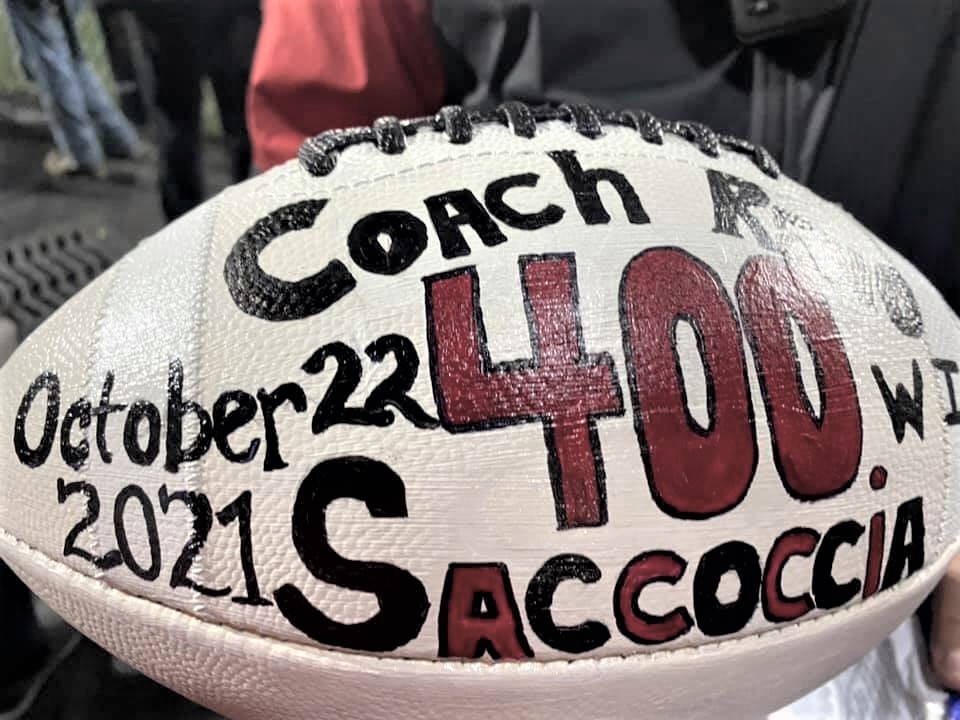 MR. 400 — Big Red decorated a football for coach Reno Saccoccia, who reached the 400 win mark with Friday’s win at Harding Stadium. Saccoccia is just the second coach in state history to win 400 games, and could tie the all-time record with a win in Big Red’s home playoff game Friday night. -- Contributed

STEUBENVILLE — John Arlesic was spot on when he called the coaching milestone achieved by Reno Saccoccia last week “mind-boggling.”

Thanks to Big Red’s 34-20 victory over University School on senior night, Saccoccia earned his 400th coaching win. He is in his 39th season as Steubenville’s grid boss.

He is the second winningest coach in Ohio high school football history, just a victory behind Jim France, who coached at Akron Coventry and Akron Manchester. It took France 49 years to reach the 401 mark.

“It’s mind-boggling that he has won more than 10 games a year for 39 years,” said Arlesic, who serves as Big Red’s athletic director and also works on Saccoccia’s staff. “You only schedule 10 games a year. To put that into context, he is averaging more than 10 wins a year over a 39-year period.

“Some coaches might have more state championships and other accomplishments, but what he (Saccoccia) has done over the years and what he has done for the entire state, serving on the board of the Ohio High School Coaches Association, you just can’t put into words. He and Jim France definitely are the legends of Ohio high school football coaches.”

Arlesic pointed out Saccoccia “has been a mentor to many players and coaches across the entire state.”

“He just doesn’t take Big Red football seriously — he takes Ohio high school football seriously. Because of him, we had a season last year during COVID. He stepped up and spearheaded efforts to get the state and the OHSAA to do that. That’s the type of guy he is.

“It’s never about him. It’s about Big Red, it’s about football and it’s about family. That is the best thing about it. There’s always that tough exterior, but there has never been a time when a student, a player or a coach has asked him for anything that he hasn’t helped that person out no matter who that person was or what they needed. To me, that’s the best part of coach Reno.

“He does things the right way. He puts family, Big Red and football in the forefront. It’s not about him, it’s about the entire community aspect of his life.”

Ted Gorman, principal at Steubenville High School, played for Saccoccia and later worked on his staff.

“Congratulations to coach Sac on his 400th victory,” Gorman said. “I have seen firsthand the hard work and dedication that he has poured into our program. I was a sophomore at SHS when he took over as head coach. Under his leadership, we were fortunate to win our first state championship my junior year.

“After all these years and wins, he still is motivated to be the best. I’m fortunate to work with him every day.”

Josh Franke, the head coach at Toronto, echoed Arlesic’s comments about Saccoccia being a mentor.

“The guy definitely is someone young coaches can look towards as a mentor,” Franke said. “He is a very humble person who always has taken time out of his day to say hello to me and my family. He has texted me support and offered words of encouragement. I have nothing but good things to say about him.

“What an accomplishment. I think he is a football figure head for this entire valley. He has a ton of experience and a ton of success. Someone as young as I am can only hope to one day see the level of success he has achieved.”

Three current players (seniors Inky Jones, Brandon Kinney and Jaylin Harris) all thanked their coach for the lessons they’ve learned during their years with the program.

“Playing for coach Reno is an honor and a pleasure,” said Jones, a wide receiver and defensive back. “He doesn’t just teach you how to be a good football player, he also teaches you how to be a good student and a better person. He has taught us how to treat people the right way and to always respect people older than us.

“It’s been a fun ride but it’s not over yet. If you want to be on the field on a Friday night, you have to work hard and earn your spot. Nothing is handed to you. He has taught us the value of hard work and that’s a lesson you can carry with you.”

Kinney, who excels at middle linebacker and tight end, said Saccoccia is “a really respectful guy and I love playing for him.”

“He is hands down one of the best coaches I have ever seen,” Kinney said. “He pushes us to work hard and always improve — not just in football but in life. He is just a great leader.

“We’ve learned there are always going to be complications in life, both in football and the real world, but you can’t let them get you down. You have to hit back and fight through adversity.”

As one of the guys up front, Harris has helped Big Red’s offense compile 2,479 rushing yards and 1,537 passing yards through 10 games.

“Coach brings you up as a person,” he said. “He coaches you hard but also keep you going mentally.

“He’s always pushing us and motivating us to get better both in football and in life. He keeps us going when things get tough. It has been a blessing for me to be part of the program and to have an impact on it.”

Saccoccia can tie France should his Big Red be successful Friday when it welcomes Tallmadge to Harding Stadium for the opening round of the Division III, Region 9 playoffs. Steubenville (8-2) is the sixth seed while the Blue Devils (7-3) are seeded 11th.

Big Red will be making its 21st consecutive and 34th all-time appearance in the Ohio playoffs, all obviously coming during Saccoccia’s tenure. Steubenville has an all-time playoff record of 68-29, has captured four state titles and finished second five times. The program has been a state semi-finalist 18 times in the past.

And, by the way, the 8-2 record represents Big Red’s 23rd straight winning campaign.

“The legacy of 400 wins speaks for itself,” said Catholic Central coach Anthony Agresta. “In my occasional interaction with Reno the thing that stands out to me is he hasn’t lost his passion and love for the game of football. That just may keep him going.

“Who knows how many more he may get? Congratulations to him on this accomplishment.”

As a reminder to local fans looking to attend Ohio football playoff games this season, the OHSAA will be using digital ticketing for entry.

There will be no cash accepted at the games. Tickets can be purchased while outside the venue but they have to be purchased digitally on a smart device.

Tickets can be purchased at www.ohsaa.org/tickets.

The OHSAA has said tickets can be purchased online until the event is sold out. Presale tickets will go on sale three to five days prior to an event taking place.