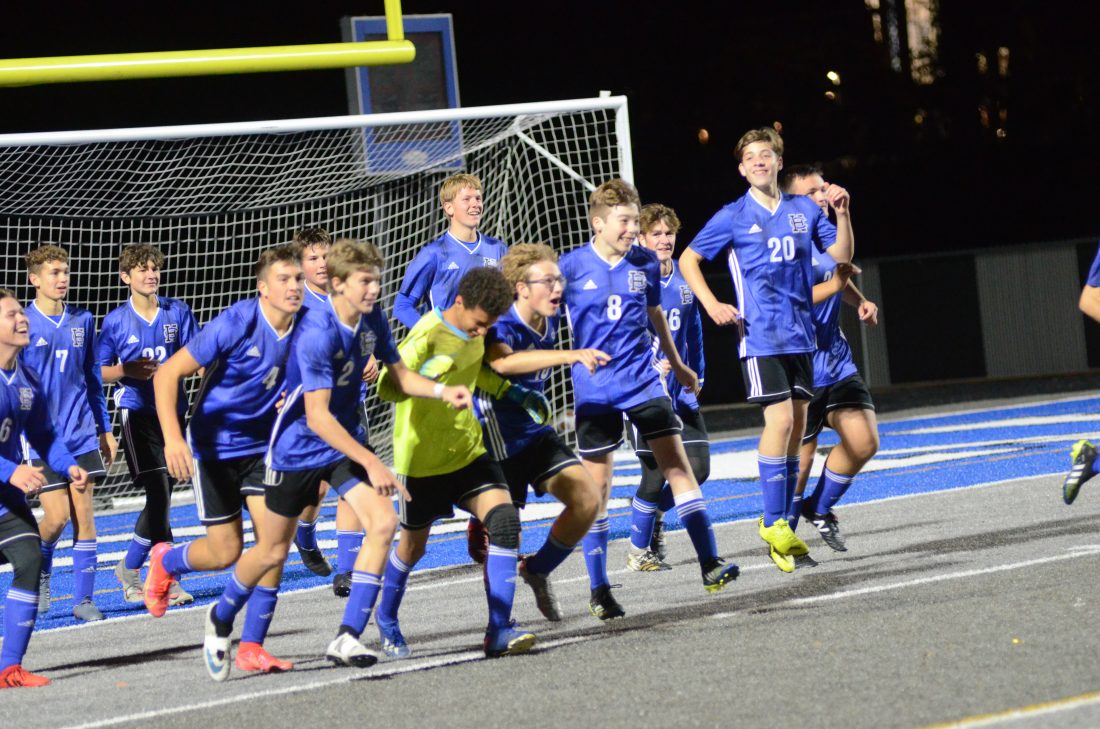 CADIZ — Some two hours and 45 minutes after the match started, Harrison Central’s four seniors got to celebrate a win on their home field one more time.

After battling to a 2-2 tie through regulation and neither team being able to find the back of the net in two overtime periods, the Huskies pulled out a shootout win over Tri-Valley in a Division II, East 2 District sectional semifinal.

After remaining tied through two overtimes, the five round shootout was deadlocked at 4-4, extending it to a sixth round. Jacob Mattern, one of those seniors, scored as the first shooter in the sixth round, and Tri-Valley’s Lucas Cameron fired the ball over the crossbar on his attempt, giving the No. 15 seed Huskies (8-9-1) the dramatic win, their first tournament win in four seasons.

“I’m glad we could get this win for our seniors, our first playoff win in four years,” Harrison Central head coach Derek Gramling said.

“I hate it for Tri-Valley, they played a heckuva game. Somebody had to lose. To go to PKs, it is tough to win or lose on PKs because you know how well the other team played, too.”

Harrison Central goalkeeper Jaydis Yoho, who made a big save in the third round of the shootout to tie things back up after the Huskies fell behind in the first round, was mobbed by his teammates, who then celebrated with the student section that spilled out onto the field in celebration.

“He didn’t start the season as our goalie, after couple games we made a switch and moved him in goal and it’s been a learning experience, but he’s been phenomenal,” Gramling said. “He’s made some amazing saves. His penalty kick save was awesome, he was battling, full-stretch and he’s got a bright future.”

Between 80 minutes of regulation and two 15-minute overtimes, Yoho was credited with 10 saves.

Though Tri-Valley (3-13), the No. 16 seed in the tournament had the better of the possession throughout much of overtime, the Huskies had the best chance to end it with just under 12 minute to play in the second extra session when Tri-Valley keeper Camden Wickerham was given a yellow card and had to come out the game.

Replacement Truman Tarbert, however, made two big saves on the ensuing free kick and the rebound off the initial shot, before Wickerham was able to sub back in.

Tri-Valley went the other way later in the extra session and fired a shot off the crossbar.

“It was a cardiac game for sure,” Tri-Valley head coach Keith Loughlin said. “It was very exciting for sure, hopefully the fans enjoyed it.

“It’s not a fun way to lose, but our heads will be high and we will come back stronger next year.”

In regulation, it began to appear as though the Huskies were on their way to victory leading late in the second half, but the celebration had to wait about another hour as Tri-Valley’s Sam Schott connected on a penalty kick to even the score at 2-2 in the 69th minute.

Schott had also opened the scoring in the 51st minute after the match was scoreless at halftime.

First, Mattern connected with a header into the net off a corner kick, then, after the Huskies got the ball back into the TV end, Jace Madzia lifted a perfect shot from long distance over Wickerham and in.

“We just tried to manage adrenaline,” Gramling said. “We knew Tri-Valley was going to have a lot of pressure. We told them bend, don’t break. It is a game of momentum. If you ride their momentum, and keep them from scoring, then we get the momentum and score, you’re going to get a positive result.

“It is all about managing adrenaline, the ups and downs.”

OUT WITH A WIN

The four seniors playing on Wagner field for the final time were Mattern, Mack Marshall, Clayton Everhart and Ben Puskarich.

“They’re going to be missed a lot next season,” Gramling said.

The Huskies face a tough test in the sectional final, traveling to No. 2 seed Dover on Saturday for an 11 a.m. match.

“That was the price of a home playoff game,” Gramling said of meeting the No. 2 seed in the second round. “We will go to Dover and play them as hard as we can.”