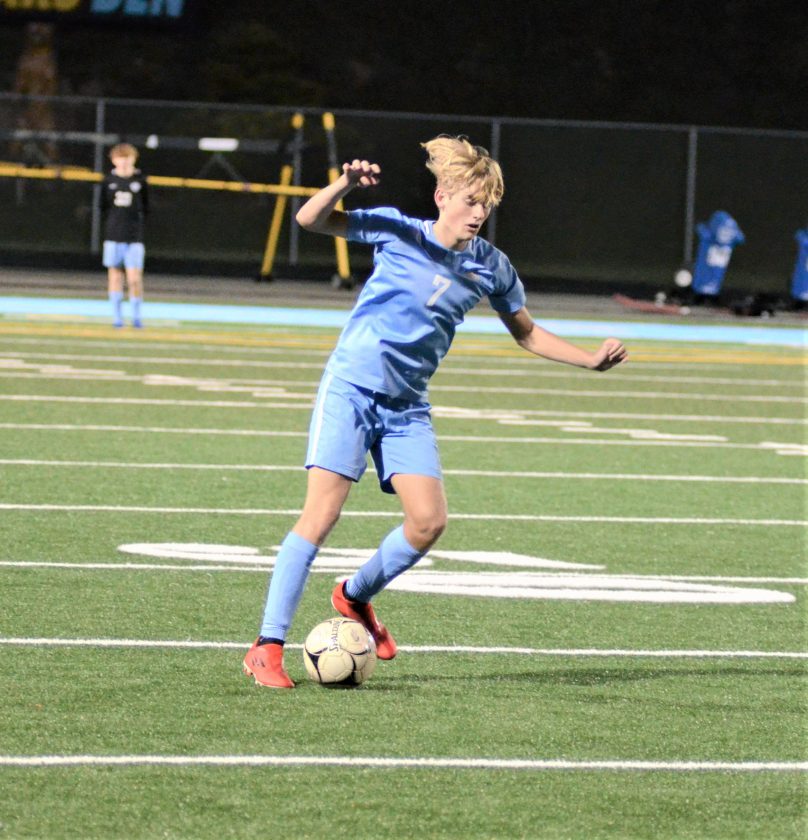 NEW MANCHESTER — After a long season and a lot of adversity, Oak Glen boys soccer coach Jaison Polly wanted his team to get back to the form it had early in the season when sectionals began Tuesday.

The Golden Bears did just that, rolling to an 8-0 victory over Tyler Consolidated in a Class A/AA Region 1, Section 1 quarterfinal match Tuesday night at the Bears Den.

“It means a lot, especially after what we’ve been through this season with the quarantines and the shutdowns,” Polly said of getting a tournament win. “We started off (the season) strong, then it seemed like as soon as that hit, it deflated us. We’ve slowly been trying to come back from it.

“(Tuesday night) they actually listened, played our game, played the way we’ve been training. They moved the ball well. It feels good to get that win.”

For the Golden Bears, Preston Cole and Stephon Polly each had a pair of goals, Andrew Giambroni and Garrett Allen also tickling the twine.

Oak Glen, the No. 4 seed, outshot the No. 5 seed Knights (4-14) by a wide margin as Tyler goalkeeper Owen Westbrook made 19 saves.

“Tonight was definitely a confidence booster for them, which they needed and have been lacking,” coach Polly said. “I noticed the movement, the ball movement was where it was at the beginning of the year so hopefully that continues to Thursday.”

The Knights are a young team that had been playing well coming into the tournament winning their last four regular season games prior to Tuesday’s tournament opener.

The first taste of the tournament for a team that will return everyone, though, was full of lessons learned the hard way.

“We had high hopes coming into this, we won our last four and came into the playoffs hoping to have a good showing,” Tyler coach Ryan Miglino said. “We hadn’t given up a goal in our last four games and were pretty pumped for this, it’s a let down, but that’s OK. We have no seniors and mostly sophomores. This team is going to grow together. This is going to be a team to be reckoned with the next couple years.

“They got a little bit of the experience (Tuesday). They hadn’t played in a game this big with these many implications. I think they had some nerves tonight in the first half. They looked a little out of sorts. They came around in the second half, but by then it was too late. Oak Glen is definitely better than their record.

“I’m proud of the boys, they worked hard all year. They improved every single game and they were out there fighting the whole 80 minutes. I’m looking forward having everybody back next year.”

The win sets up a Hancock County clash on Thursday as the Golden Bears will look to upset the top-seeded, 14-1-2 Red Riders at Jimmy Carey Stadium.

“Thursday is going to be Thursday, it’s a rival team,” coach Polly said. “They’re a good team, and they are definitely strong this year. I’m just hoping we can have a good, successful game against them and hopefully we can take them out.”

Weir High won the regular season meeting between the rivals, 6-1, on Sept. 21.

“Me personally I fell that (the pressure is on Weir),” coach Polly said. “Having that season like that, if I was (Weir High) coach Matt (Kopp) I would feel (like the pressure was on them) having a dominant season like that. The last three years, they’ve lost out (of the tournament) to us, Wheeling Central and Tyler Consol., so it’s probably in the back of his head.

“I think it is more pressure on them than us.”