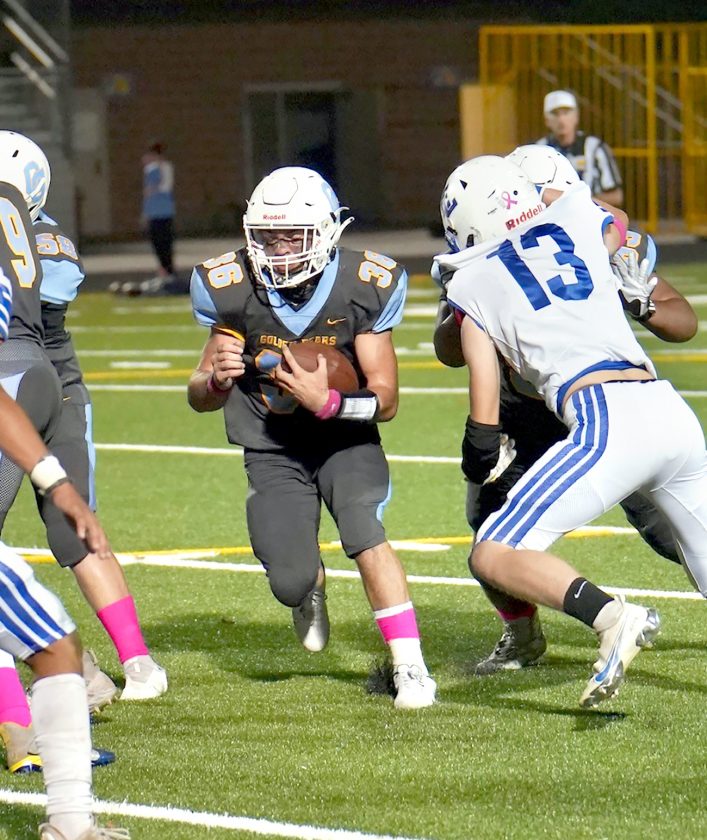 NEW CUMBERLAND — For East Liverpool’s football team, it was a bridge to victory.

Led by the backfield duo of Devin Toothman and Cam Irvine, the Potters rushed for 338 yards and came up with two big stops on defense to capture the “Battle of the Bridge” 34-13 against Ohio River rival Oak Glen Friday night.

In so doing, the Potters captured the Ohio River Rivalry Cup, an annual traveling trophy.

“Our line came ready to play today,” said Toothman. “It feels great to come out here and win a trophy.”

The loss spoiled a fine rushing performance by Oak Glen’s junior running back Matt Greenlief who rushed for 162 yards on 19 carries and he scored a rushing touchdown.

East Liverpool’s defense also played a key role in the win as they turned the Golden Bears away at the Potter 4-yard line in the second quarter and at the East Liverpool nine in the fourth quarter. Potter Dashon Slappy also had an interception on defense.

“We weren’t able to capitalize on opportunities we should of,” said Oak Glen head coach Ted Arneault. “That’s on us, we have to make things click together when we need to score and put it in the end zone.”

East Liverpool starting quarterback Eric Williams rushed for 55 yards and a touchdown in the first half, but sustained an injury before halftime and the Potters went with freshman quarterback Gavin Wright in the second half.

“It’s a rivalry game, this is just like a Beaver Local,” said Ludwig. “Oak Glen’s always been a big game for us and I’m proud of the way our kids played and rallied because we lost our quarterback at halftime and he’s our guy and we’re hoping to get him back. But I want to make sure to recognize Gavin Wright, a freshman coming in tonight and just taking care of the game. I’m really proud of him as a freshman. He’s the first kid down there (in practice) and the last one to leave and I didn’t hesitate to put him in because I knew he could do it.”

“The energy we had in the locker room and coming out here, and our line just tore up, and it felt great,” said Toothman of the Potters’ great start.

Oak Glen fumbled the ball away to the Potters at the East Liverpool 36. The Potters capitalized, marching 64 yards to score on a one-yard plunge up the middle by powerful back Cam Irvine. Jacob Myers added the PAT kick and the Potters led 13-0 at the 3:23 mark of the first period.

The Golden Bears coughed up the football again when a punt snap sailed high over the punter’s head and the Potters tackled the punter at the Golden Bears’ 47. Again, the Potters took advantage of the miscue and drove 47 yards to score on a 19-yard scamper around right end by Eric Williams. Myers added the PAT kick and the visitors led 20-0 at the 10:07 mark of the second quarter.

“That (a rushing team) is who we are and that’s who Oak Glen is,” said Ludwig. “We were going to attempt to throw the ball a little more in the second half but we put it on our upperclassmen — our O-line — and not making a freshman (quarterback) do too much in the second half.”

Oak Glen added its first-half touchdown on a 62-yard scoring march, highlighted by a 55-yard scoring run up the middle by the speedster Greenlief. The Bears’ PAT attempt was foiled when the holder was forced out of the pocket and his pass fell incomplete.

“I thought Matt Greenlief had a great game for us,” said Arneault.

Oak Glen had a golden opportunity to make it a one-score game just before half, but with the clock running down and Oak Glen out of timeouts and the clock ticking under 10 seconds, a high shotgun snap at the East Liverpool four forced quarterback Tristin McCauley to be tackled for a loss as time expired.

“We had an opportunity at the end of the half and a couple of opportunities in the second half and we just didn’t capitalize,” said Arneault. “Some of that was turnovers in key situations. I thought we were more disciplined this week than last week but it wasn’t enough to overcome the hole we dug with turnovers and missed opportunities.”

After a scoreless third quarter, East Liverpool got some breathing room in the fourth quarter when Toothman raced 78 yards around left end to score. Myers added the PAT boot and the Potters took a 27-6 lead with 8:36 left.

Oak Glen quickly cut the deficit to 27-13 when Anthony Burt scored on a three-yard run up the middle with 6:59 left and kicker Trenton Richmond added the PAT kick.

But Toothman answered with a 20-yard scoring run on second effort and Myers added the PAT kick with 6:33 left and the Potters leading 34-13 to close the scoring.

Heading into Friday night’s action, the five teams that have defeated East Liverpool this season had a combined record of 29-9 and they have not lost to a team with a losing record.

Friday’s Potter-Golden Bear matchup was the first time the teams have played in two seasons. The last time the two schools played was in 2019 when a then unbeaten Oak Glen team captured a 21-13 victory at Patterson Field.

East Liverpool returns to action next Friday night when it crosses the Ohio River once again to play the Weir High Red Riders.