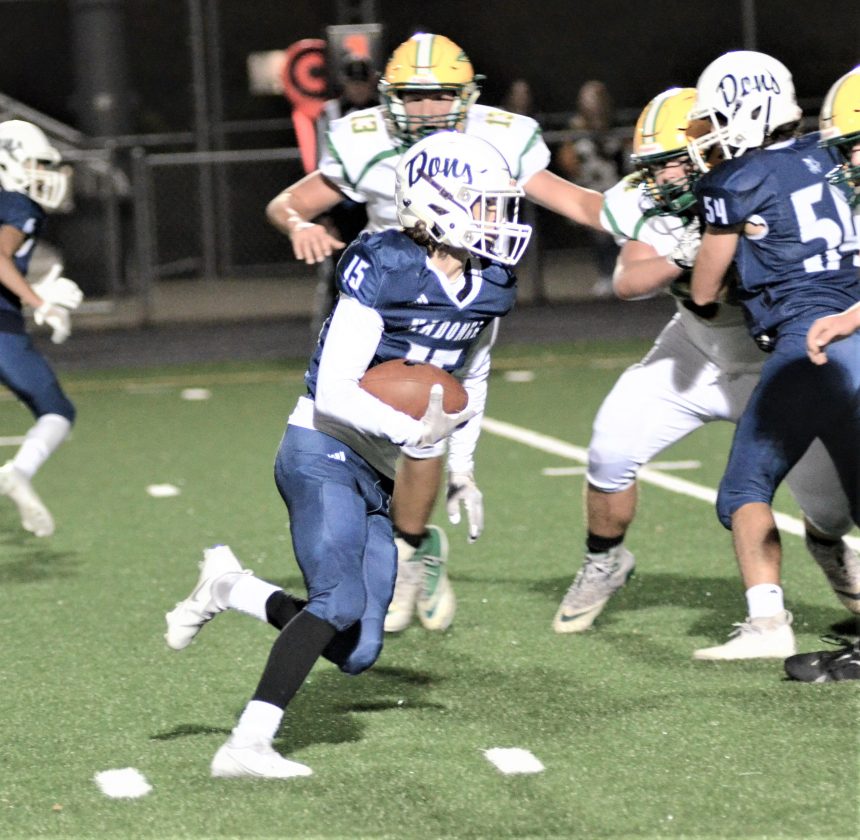 LOOKING FOR ROOM — Madonna’s Chase Littleton tries to find a hole while Conotton Valley’s Gaige Galigher closes in for the tackle during Saturday’s game at Jimmy Carey Stadium. -- Andrew Grimm

WEIRTON — As the teams traded scores through the first three quarters, Saturday’s game at Jimmy Carey Stadium between Madonna and Conotton Valley started to feel like it was going to come down to which team made a mistake first.

Unfortunately for the Blue Dons, it was them.

After scoring first and leading most of the way on what was senior night, the first snap after the Rockets had tied the score at 28 misfired and had to be fallen on for a 22-yard loss.

That led to the series being a three-and-out and ended in the game’s only punt, setting up a 14-play Conotton Valley (5-4) drive to take its first lead.

The Dons (5-3) got the ball back with two timeouts and 2:20 to work with down by 6, but a Santino Arlia pass was tipped, picked off and returned 50 yards to the endzone by the Rockets’ James Burleson, sealing a 40-28 win for CV.

The Rockets scored the final 20 unanswered points after trailing 28-20 after three quarters.

“We haven’t been able to practice defense in four weeks (because of low numbers). It’s one thing to talk about it and watch film, but it’s different (in a game). It comes down to numbers.

“Our effort is great, I can’t believe we get this kind of effort. I’m so proud of these guys. Wins and losses come and go. Our effort is excellent right now for 19 guys.”

After scoring 20 points and compiling 10 first downs in the opening half, Madonna moved the sticks just twice and scored just eight points after halftime.

“It kills you,” Rovira said of guys getting worn down in the second half. “They have six more guys than us. That’s a big difference. Our corner (Lennon Dietrich) got hurt, and we had to put an outside backer (at corner).

“Even with the numbers, we were a couple plays away. The bad snap, the interception, we dropped an interception (that would have ended the go-ahead drive). Every single loss we have been right there. Our effort is great, I can’t say it enough.”

The loss unofficially dropped Madonna to 13th in the West Virginia Class A playoff race, while the Rockets, with the win, unofficially jumped from 16th to 11th in the Ohio Division VII, Region 27 playoff rankings and appear to be getting a much more favorable matchup against the No. 6 seed, Waterford, rather than the No. 1 Newark Catholic.

“We get a playoff appearance and move up to (11), which gives us a chance next week to play someone we can be competitive with,” CV head coach Don Hertler Jr., the son of Bridgeport Bulldogs Hall of Famer Don Hertler Sr., said. “Finishing (the regular season) 5-4 is a pretty nice record for us. (Madonna) has a nice ball club, we just made a couple more plays than them.

“We very much did not want to be the 16 seed. I give our seniors credit, I give our staff credit. They bowed up and got it done. It is never easy going on the road.”

Arlia completed 15 of 27 passes for 144 and three touchdowns, but was just 3 of 10 after halftime and had the costly pick.

Evan Quering, the intended target on that throw, hauled in five passes for 88 yards and a score.

Another big difference from the first half to the second was the Dons ground game. In the first half, Madonna ran the ball 17 times for 51 yards. In the second half, they were limited to seven carries for negative 10 yards (-30 of which came on the botched snap and a sack).

Meanwhile, the Rockets ground game was there throughout the whole game as CV put together scoring drives of 11, nine, 13 and 10 plays. Bruising back Maddox Walter toted the pigskin 26 times for the Rockets, compiling 82 yards and score.

Freshman QB Zach Putnam plunged in on two QB sneaks for scores and went 13 of 18 for 138 yards and another pair of scores.

“Our freshman quarterback did pretty well,” Hertler said. “He made some nice throws.

“We didn’t play our best, but we haven’t played our best football yet. Hopefully we do that next week.”

Madonna got first half scores from Chase Littleton, a 3-yard run to open the scoring for an 8-0 lead after one quarter, and a pair of Arlia to Mason Thompson TD connections of 5 and 3 yards.

Quering made an acrobatic catch just inside the pylon late in the third quarter to make it a 28-20 Madonna lead, but those would be the last points to go on the home side of the scoreboard.

Conotton Valley: Made the Ohio playoffs and appears to be headed to Waterford in the Region 27 opening round, based on Joe Eitel’s unofficial rankings.

Madonna: Will need to bounce back if it wants to make a trip to the West Virginia Class A postseason, as it goes on the road to face Hundred and Trinity Christian the next two weeks to close the regular season.