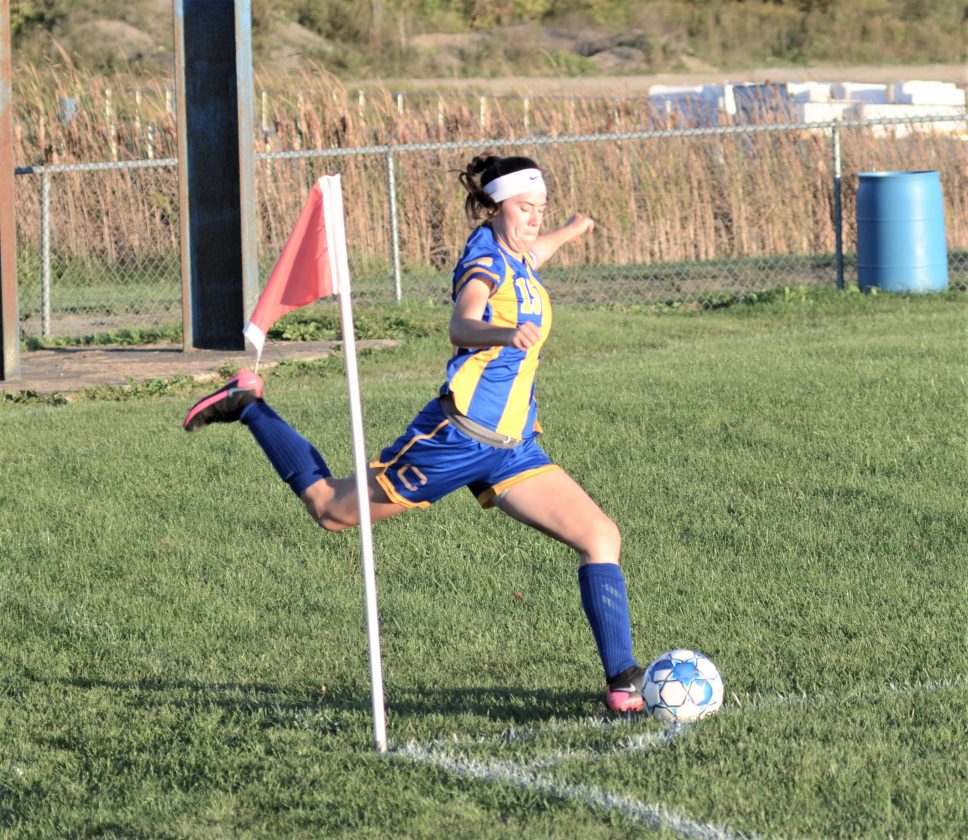 STEUBENVILLE — The Catholic Central girls soccer team has advanced to the district tournament.

Catholic Central — the No. 3 seed — scored the first three goals of the match against Ridgewood — the No. 6 seed — en route to a 5-2 victory in an Ohio Division III Sectional Co-Final Tuesday evening at the Tony Recinella Soccer Complex.

“We needed to play with focus,” Catholic Central (12-4-1) head coach Jonathan Hoover said. “We calmed ourselves down. We did not do anything different. We played consistent. We played how we have played all year.”

With the win, Catholic Central will take on No. 2 seed Bishop Rosecrans in a district semifinal Tuesday at a time and location to be announced. Bishop Rosecrans defeated No. 7 seed Sandy Valley, 6-1, Tuesday night in another sectional-co-final. The Bishops outscored the Cardinals, 4-0, in the second half.

“The toughest thing about playing Rosecrans is their goalie, Makaela McLaughlin,” Hoover said. “She is a very talented goalie. If they advance, and we play them, she will be the toughest goalie we have seen all year.”

The Crusaders led 4-1 at halftime.

“They beat us 5-1 earlier in the season,” Ridgewood (2-11-3) head coach Tim Tubbs said. “We gave ourselves opportunities. We had the ball down on their end for quite a bit of time. We did not capitalize, and they did. They are a talented team. They are well coached. Their girls do what they are supposed to do.”

Jackie O’Karma and Maria Meyer each recorded a pair of goals for the Crusaders, while Beth Beigel tallied one.

Becca Bolster contributed an assist for Catholic Central as did Beigel and O’Karma.

“We tried a different defensive lineup today, but it did not work as well as I had hoped,” Tubbs said. “There was no surprises. No. 5 — Maria Meyer — is a talented girl. She did a fantastic job. We expected her to do a fantastic job. They are well coached. They followed the game plan.”

Megan Brown made two saves in goal for the victors.

Hailey Davis scored both goals for the Generals off assists by Amanda Schwartz.

“I don’t think No. 11 (Davis) played when we saw them in September,” Hoover said. “They did the same thing. They didn’t do anything different. They did what we expected them to do, but No. 11 gave us trouble down the left side. I thought they did a good job with their offside trap. That is something they have worked on since the beginning of the season. That made it harder on our offense. You saw that with the number of times we were offside at the beginning of the game. No. 11 is a difference maker. She is dynamic. She has a lot of speed and skill. She made it hard on us on the outside of the field.”

Ally Blevens stopped eight shots in goal for the visitors.

O’Karma collected the first two goals of the match for the Crusaders giving Central a 2-0 lead. Beigel assisted on O’Karma’s second goal.

Then, Beigel delivered the team’s third goal giving the Crusaders a three-goal advantage.

The Generals answered when Davis scored her first goal of the match to pull the Coshocton County team to within 3-1. The shot by Davis hit the crossbar before bouncing down inside the goal.

Meyer capped the scoring in the first half as Catholic Central was able to regain a three-goal advantage at 4-1.

The Crusaders got off to a fast start in the second half as Meyer netted her second goal of the match early on to give the hosts a 5-1 lead. O’Karma assisted on the goal.

Davis delivered her second goal of the match to pull her team to within 5-2, but the visitors could not get any closer the rest of the way.

“We are going to miss our seniors,” Tubbs said. “They are the catalyst of this team. We are going to regroup in the offseason, and we are going to hopefully fill the gaps of the girls we will be missing and wee what we can do next year.”

“We have played a lot of tight games this year,” Tubbs said. “We have three ties. There were five games where we lost by two goals or less. We just could not get over that hump. We are a talented team. We are higher in the final pool than we should have been with our record.”

Catholic Central has now won the next game it has played this season after suffering a loss in the game before.

“We just want to keep being consistent,” Hoover said. “We don’t want to mess with the balance we have had. The girls understand it is a new game and that you cannot dwell on what happened before in the last match. You have to learn from your mistakes, and you have to correct your mistakes so you do not make them again.”

“This is a little different from football, every team makes the playoffs,” Hoover said. “You are expected to win the first game, and then you see how far you can go. This is the exciting time of the year.”

The Crusaders are going to maintain their normal practice schedule as they prepare for the district semifinal.