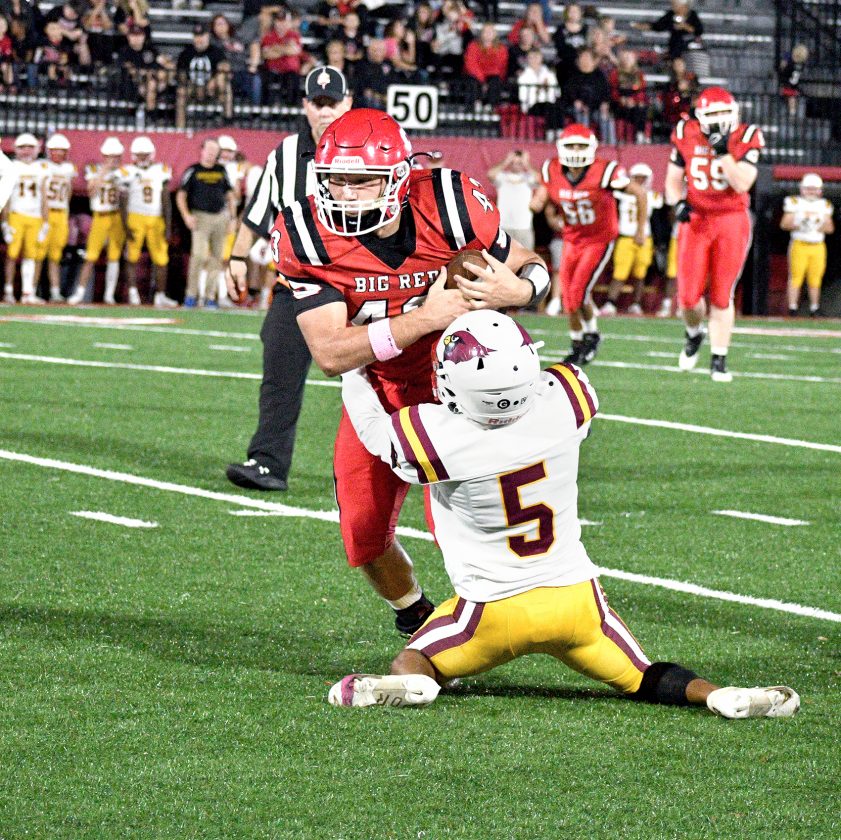 STEUBENVILLE — Big Red put two first quarter scores on the board Friday and never looked back in taking down Youngstown Cardinal Mooney 35-14 inside Harding Stadium.

Steubenville improved to 7-2 and moved a step closer to clinching a first round home game in the Division III Region 9 playoffs. The win was number 399 for coach Reno Saccoccia since taking the reins of the Big Red program.

“It was a good win but if we don’t coach better and play better, we’re not going to be around very long,” Saccoccia said.

“It’s always good to get a victory over Cardinal Mooney. That’s just our fourth win against them in 11 games. We love a win, we never complain about a win but whether you win or lose — you have to improve and we have to improve on the little things.”

After its defense forced a turnover on downs, Big Red moved 50 yards in two plays for the game’s first score.

It came on a 27-yard burst by hard-running junior tailback Spencer Ostovich. Junior quarterback Phaeton Hill connected with sophomore tight end Jace Kernahan for the other 23 yards on the drive. Austyn Roberts added the PAT.

On Mooney’s next position, the Steubenville D delivered a three and out and its offense responded with a 67-yard drive. Hill ran in it from 5 yards out for his first rushing touchdown. Roberts again nailed the kick.

Steubenville increased its advantage to 21-0 thanks to a 4-yard run by sophomore Elijah Mullins with 20 seconds remaining in the half. Roberts was true with his conversion boot.

The Cardinals had a shot just before the intermission after Cameron Sweeney returned the ensuing kick from his own 14 to the Big Red 36. Two Ashton O’Brien passes, however, fell incomplete and the half ended.

Mooney took the second half kick and went 76 yards for its first touchdown. Senior Zy’ere Rogers did the honors from 2 yards out. Nick Pregibon split the uprights on his PAT try.

Any momentum the Cardinals had quickly disappeared as Big Red answered with a 73-yard scoring march. It ended with Hill finding Ostovich for a 19-yard touchdown. The perfectly executed screen pass came on a fourth and nine.

“We were happy with the drive to start the second half,” Mooney coach Carl Pelini said. “Unfortunately, we couldn’t follow it up with a defensive stop.

“Our guys played hard. We have a lot of injuries, we’re down guys and we are playing some guys out of position. To their credit, our guys battled for four quarters.”

“That’s a good football team we played,” Pelini said. “They play fast and they play physical. You have to be on you’re a game to compete with them.”

Big Red will close its regular season next Friday when it welcomes University School to Harding Stadium.

Mooney, which went up against Warren Harding last week, drops the curtain next Saturday with a home contest against rival Ursuline.

“Brutal,” Pelini said when talking his club’s schedule. “We played Steubenville coming off the Harding game then we have Ursuline.

“It’s tough every week but we wouldn’t have it any other way. We have to build the program back to where we are competing against all those teams.”