Big Red not looking past Mooney 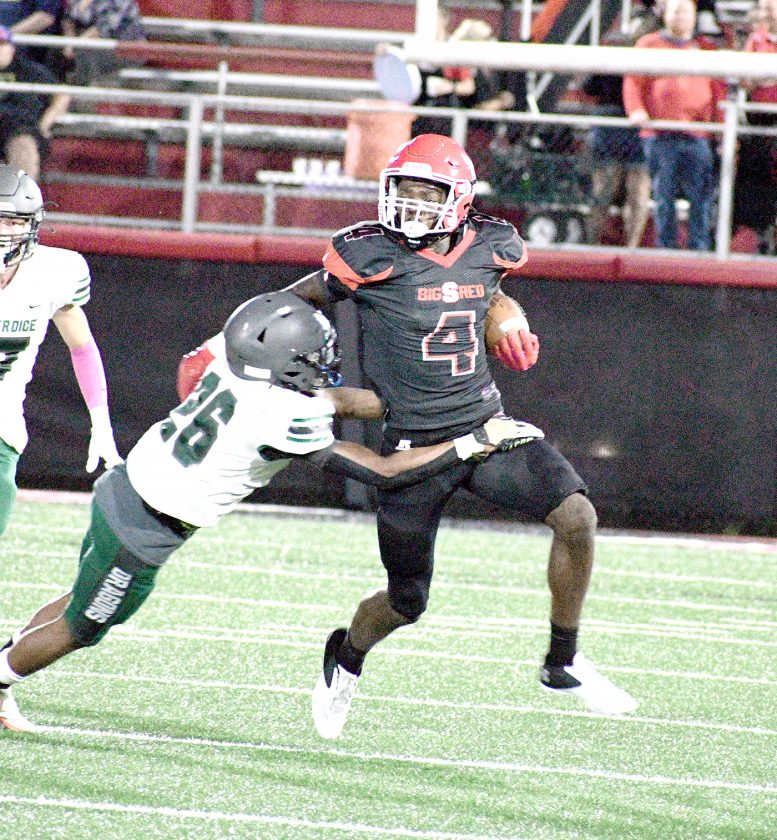 BACK ON TRACK — Ivan Buggs and the Big Red football team got back on track with a win last week and look to make it two in a row when Mooney comes to Harding Stadium, Friday. - Michael D. McElwain

STEUBENVILLE — Youngstown Cardinal Mooney is one of a few opponents who actually holds the advantage in their all-time series with Big Red.

Steubenville will be looking to cut into the Cardinal lead when the tradition-rich programs collide Friday inside Harding Stadium. The opening kick is set for 7 p.m.

The schools have met 10 times in the past, Mooney winning seven of those encounters. Friday’s contest will be just the second regular-season affair. Big Red put a 40-13 whipping on the Cardinals in the 2020 season opener.

Thanks to last week’s victory over Pittsburgh Taylor Allderdice, Big Red stands at 6-2 and is seventh in the Division III, Region 9 computer standings. Mooney, playing a difficult schedule as always, has had a tough go of it so far and will bring a 1-7 mark to town.

“The only record I know about Mooney is we have played them 10 times and they have won seven,” Big Red coach Reno Saccoccia said earlier this week. “We are 3-7 against them and that is the only record I am concerned about.”

The teams do have a common opponent in Linsly. Big Red clipped the Cadets 26-17 while Mooney dropped a 35-21 verdict.

Over the years, Saccoccia has developed a level of respect for Mooney and other teams based in Mahoning and Trumbull counties.

“All I know is we are playing Youngstown Cardinal Mooney and our record is 3-7 against them.”

In addition to playing what Saccoccia called “a really good schedule,” the Mooney football team also dealt with some issues related to its head coach, Carl Pelini.

He was placed on administrative leave after police were called to his home following an incident involving his wife. Domestic violence charges were filed by later dropped after his wife said she would not testify and attorneys said there were no other witnesses to any type of domestic violence.

In its eight games, Mooney has scored 101 points while allowing 222. The Cardinals suffered a 27-0 loss to Warren Harding in their last outing.

Mooney’s offensive attack is directed by sophomore quarterback Ashton O’Brien. He is joined in the backfield by three capable tailbacks in senior Zy’ere Rodgers, senior Davonte Miller and senior Ty Howell. Howell also will line up as a wide receiver.

When O’Brien does pass, he has several speedy targets to look for. In addition to Howell, other receivers are junior Nolan Radinsky and senior Jack Phillips. Sophomore William Desmond is a threat from his tight end position.

As is generally the case, Mooney has some massive players along the offensive line.

In its 48-13 victory over Taylor Allderdice, Big Red scored two touchdowns in the first five minutes of the game and never looked back. Phaeton Hill found Inky Jones for a 58-yard score on the first play from scrimmage. He then connected with Ivan Buggs for a 20-yard touchdown.

Steubenville finished with 508 yards of offense (332 on the ground and 176 through the air) and had six different players cross the goal line.

“We were able to finish with every kid on the team getting into the game.”

With Rodney James sidelined with an injury, Spencer Ostovich has become Big Red’s top rusher with 475 yards on 73 carries. He has three rushing touchdowns. Gavin Bozica has put together back-to-back 100-yard games and, for the season, has 375 yards on 64 trips. Bozica has run for six scores.

Jones is the top receiver with 15 catches for 401 yards (an average of 26.7 yards a grab) and seven touchdowns. Tylik Sims has nine catches while Ty Pierce and Hakim Edwards have eight apiece. Buggs have been on the receiving end of seven Hill passes.

Following the game with Mooney, Big Red will close its regular season with a home game against University School from the Cleveland area.