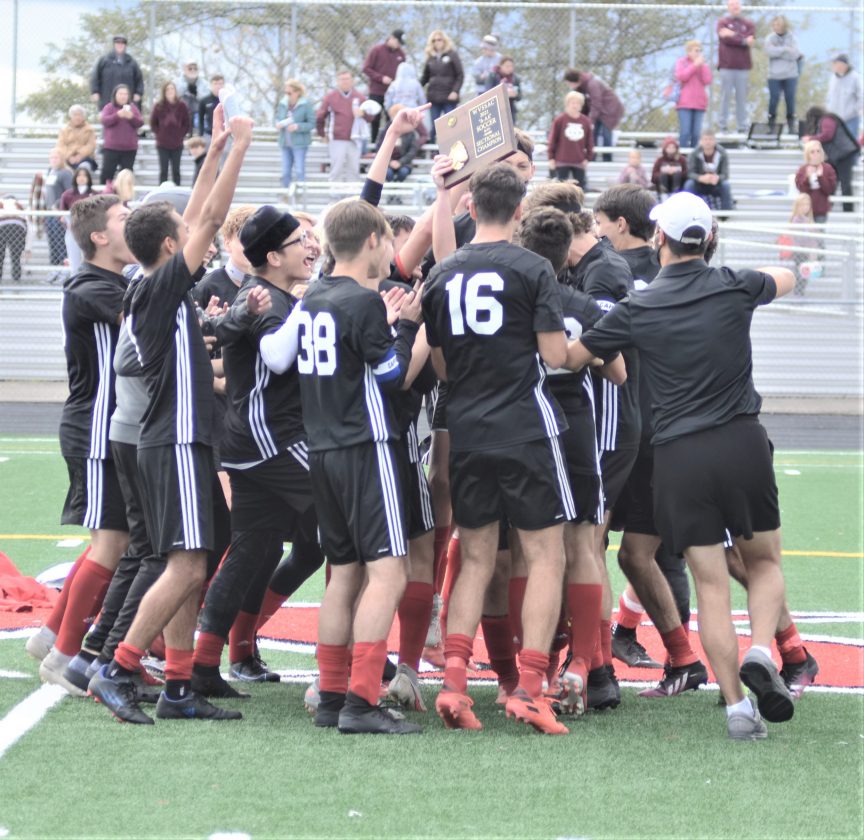 In a back-and-forth match full of highs and lows, the winner was not determined until nearly 96 minutes of soccer had been played.

Weir senior Ryan Dunmyer recorded the golden goal when he knocked the ball into the net off a throw-in with 4:03 left in the second 10-minute overtime period lifting the No. 1 seed Red Riders to a 4-3 victory against the No. 2 seed Maroon Knights in the West Virginia Class AA-A Region 1 Section 1 Final Saturday afternoon at Jimmy Carey Stadium.

Dunmyer’s goal wrapped up a thrilling conclusion to the match.

“One team always loses,” Wheeling Central (15-4-3) head coach Brian Komorowski said. “Come the playoffs, someone has to lose. It was a great game between two very-good teams. It is just unfortunate. It is unfortunate we didn’t fall on the right side of it today.”

“We only have one day of practice, but so does everybody else. We only have one loss. In that game, we only played with three starters, and we have five other guys who come off the bench. There were some things today I did not like. We are going to watch film, and we were going to get ready to play.”

The Section 1 match was deadlocked at 2 with less than a minute to play in regulation. Weir pushed forward in hopes of scoring the game-winning goal in the waning seconds of the match. The ball eventually found the foot of Michael Iafrate who rifled a shot past Wheeling Central goalie Eli Tucker and into the back of the net giving the Red Riders a 3-2 advantage with just 31 fateful seconds showing on the scoreboard clock.

Iafrate’s goal sent the Weir players, coaches and fans into celebration as it appeared to be the nail in the coffin of the Maroon Knights.

As it turned out, the celebration proved to be premature.

A mere eight seconds later, Wheeling Central’s Ethyn Taylor gathered in a loose ball in the box and ripped a shot past Weir goalie John Wansack and into the back of the net to improbably knot the score at 3-3 with just 23 seconds left in regulation.

“I have played, watched and coached soccer for 40 years, and I have never seen anything like that in my life,” Komorowski said. “They had all the momentum in the world. They thought they had just scored the game-winning goal. We came down, got fouled, put it in the box and then Ethyn finished it.”

“That was the most-insane ending I have ever seen,” Kopp said. “To score with 30 seconds left only to have them score and tie it, it was incredible. We all thought we had won the game.”

Following the end of regulation, Kopp had to gather his troops and get them refocused on the task at hand.

“It is not easy,” Kopp said asked how difficult it was for him to get his players up for overtime following the heartbreaking end to regulation. “They walked off the field with their heads down. I told them they just need to go back out there and play.

Wansack made three saves in goal for the Red Riders.

Eli Tucker, who made six saves in goal on the day, made a pair of diving saves in overtime to keep the dream alive for the Maroon Knights, however, a flick off a long throw-in proved to be Wheeling Central’s undoing.

Dunmyer’s goal was reminiscent of what transpired in Weir’s 3-2 victory against Wheeling Central at home back on Oct. 5. The Red Riders broke a 1-1 tie in that second half of that match with a pair of goals coming off throw-ins by Morgan.

Antonio Pittman opened the scoring match when he scored on a penalty kick to give the Red Riders a 1-0 lead early in the match.

The Riders held the lead until Wheeling Central senior standout Austin Nestor, who scored both of his team’s goal in the regular season match up, scored to even the match at one goal apiece with 23:39 remaining in the first half.

“Wheeling Central is a well-coached team,” Kopp said. “Nestor is a great, great player. It was a battle. We did just enough to win.”

The match remained tied for nearly 17 minutes before Ryan Prager knocked the ball into the net to break the deadlock and give the Maroon Knights the lead at 2-1 with 6:49 left to play before halftime.

The Knights held the lead for around 19 minutes of match time until Pittman netted his second goal off an assist by Luiz Bastos knotting the score once again, this time at 2-all.

“It was two-very good teams battling to the end,” Komorowski said.

Both teams had opportunities in the next 27-plus minutes, however, neither team was able to find the back of the net until the frantic eight-second period late in regulation.

“There was a comment in the paper recently from another coach saying we should be nervous,” Kopp said. “This my first time as a head coach winning a sectional title. We have not done this before. This (winning the sectional title) means a lot. We have been in this spot before, and we have lost.

“Our kids expect nothing else but to have success. I think we were the best team in our section. We may be favored to win the game against Fairmont Senior. We did not play them this year. It is a tossup. Our kids are not afraid of anyone. They don’t think they can be beaten. They think they can beat anybody. I like it that way.”

The two teams made tactical changes following their meeting less than three weeks ago.

“They played a four-back,” Kopp said. “They played with four defenders. We prepared for them to play a three-back. That is what they played before. It is different playing against a four-back. We had to attack from the outside. Nestor played a little deeper as a central-mid than he did before.”

Mattia Molendi, who assisted on Iafrate’s goal, played a key role for Weir in the middle of the field.

“They did a little bit,” Kormorowski said asked if either team did anything different in the second match as compared to the first. “They moved Mattia to the middle. I thought we were able to control the ball for the first half. They made the move, and it created some problems for us.”

Each team scored a controversial goal the first time they met on the pitch, however, that was not the case the second time around.

“We both stole goals in the first game,” Kopp said. “Only two goals were earned. Each one was given a goal. Today, all seven goals were legit goals. Both teams earned all their goals today.”

“We are losing nine seniors,” Komorowski said. “I told them when I pulled them over here that they had a heck of a career. They won three sectional titles. They wanted to win all four years. That streak is really impressive. They set the tone. They stabilized this program.”

Though they came out on the wrong side of things Saturday, the Maroon Knights have many reasons to be proud of everything they did accomplish this season.