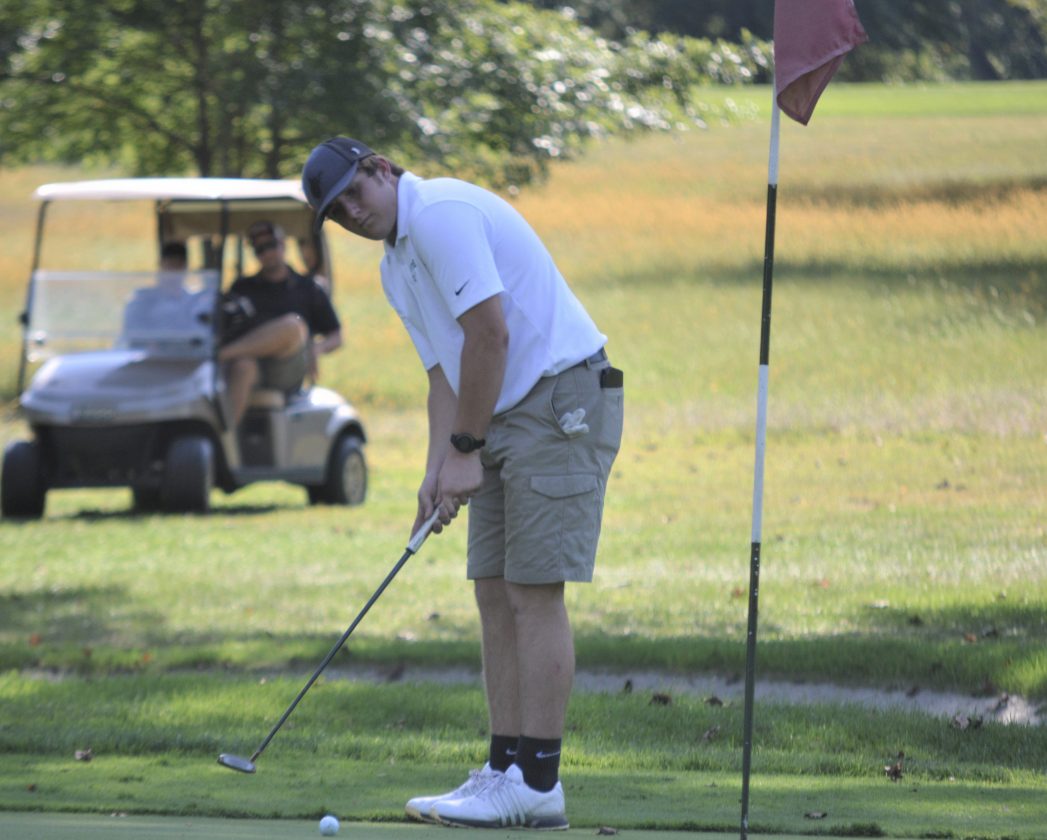 MOUNDSVILLE — The Class AAA state golf tournament will have a mix of new blood and familiar faces this year.

For the 13th time in 14 years Wheeling Park qualified for state, while John Marshall will make its first state tournament appearance in roughly 15 years.

The Patriots earned the regional crown with a score of 240 on Monday at the Moundsville Country Club and the Monarchs were runners-up with a 247.

“The pins were in some tricky spots, the wind howled and only a few kids broke 80. Our three man (Luke Marsh) came through in the clutch. He is mentally tough and he and Gavin (Goodrich) figured out the wind and held everything together.”

Goodrich brought home medalist honors with a card of 76. He impressed on holes 9 and 16 with birdies and finished strong with a par on the difficult 18 hole.

“I was hitting my driver pretty well and on 16 I hit it up there close to the green, hit my wedge shot to a foot and made putt,” Goodrich said. “I wasn’t really making a lot of putts. I had four or five birdie putts that were edge burners.”

The regional runner-up also suited up in a Park uniform as standout baseball player, Marsh, fired a 77.

“I had a few misses that weren’t that bad at all,” Marsh said. “Where I missed, it was close and I was able to get up and down a lot. I had nothing above a bogey.”

This is Marsh’s first year of playing high school golf and he is playing like a seasoned vet.

“It’s been an awesome experience,” Marsh said. “I love playing with these guys. I love them all and I love coach Headley. I’m just going out and having fun.”

Campbell Koegler shot an 87 to round out the scoring for Park.

Leading the way for the Monarchs was talented wrestler Ethan Cook, who finished third overall with a card of 78.

Cook was as lethal on the greens as he is on the wrestling mat as he drained four birdies.

“I was reading the greens better and I got the speed down and was just able to make my putts,” Cook said. “The pin locations were kind of brutal but I just found the right spots and got it in the hole.”

Along with his strong individual performance, Cook is pumped to get the opportunity to go to state as a team.

“These guys are like my brothers,” Cook said. “It’s great to play with them and have success.”

Colton Sprowls shot an 84 and Mason Orndorff tallied an 85 for the Monarchs.

“It’s been about 15 years since we made it to state,” JM coach David Gaudino said. “We actually upset our way through the regional that year and a guy who had never played in a varsity match shot a 76 at Preston.”

The Monarchs golf team has enjoyed every step of the process of getting to this point but it has also put in the work behind the scenes to earn this moment.

“This is really special, “Gaudino said. “We’re going to have a lot of fun next week. They are a very loose group. A couple of them are wrestlers and our rule is that if they win, then they can wrestle around but they can’t be within 25-feet of concrete or 50-feet of the green. I had to put that rule in for them. But, all of our kids worked all summer to get to this point and I’m very proud of them.”

Earning individual spots in the state tournament were Buckhannon-Upshur’s Evan Coffman with a 79 and University’s Landon Spiker with an 80.

The state tournament will get started on Oct. 5 and will be a two-day event at Oglebay’s Jones Course.

“I can’t wait for next Tuesday and Wednesday,” Headley said as his Patriots will go for back-to-back state crowns. “I don’t see any snow in the forecast,” he said with a laugh. “We’re just blessed to have good kids who like to play golf year after year. They have a lot of support from their parents, too. It’s a good community.”