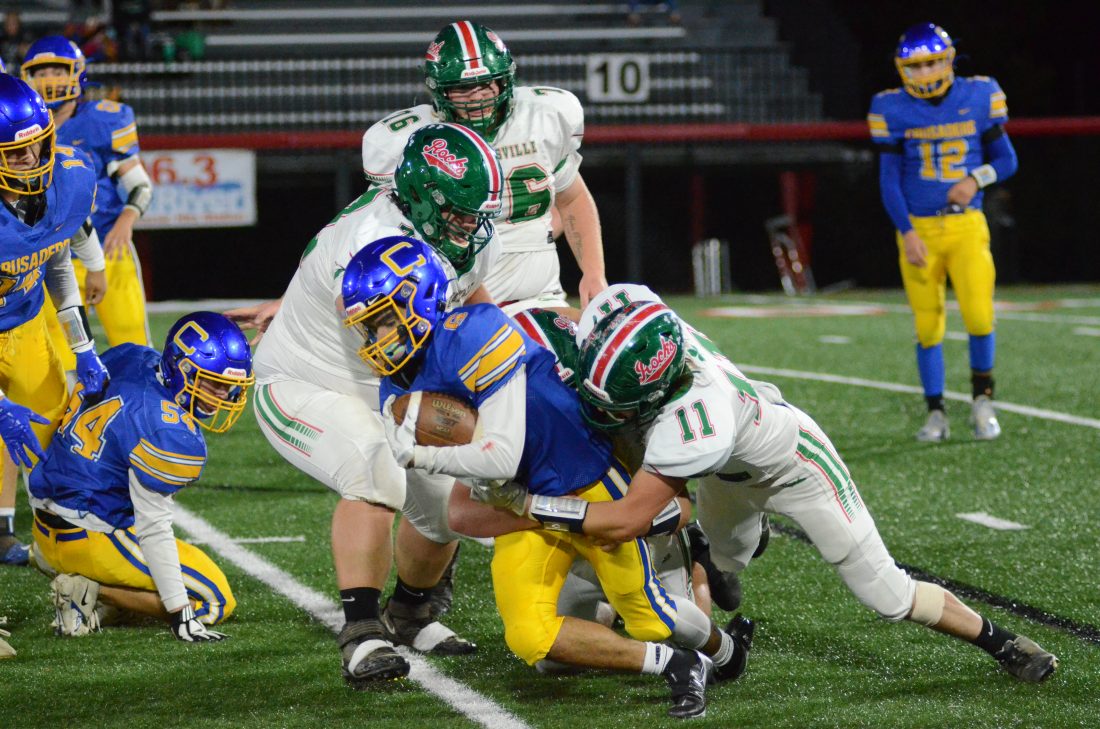 The Shamrocks dominated play on both sides of the ball as they improved to 4-1. Coach Blake Allen’s club finished with 411 yards of offense (305 rushing and 106 via the air) while limiting the now 2-4 Crusaders to just 44 total yards.

Barnesville led 14-0 at the intermission thanks to touchdown runs by Connor Jones and C.J. Hannahs then exploded for 36 points in the second half.

“This was only our second road game and in our first, we came out a little flat,” Allen said. “We did the same thing tonight. We made a lot of mistakes in the first half and shot ourselves in the foot a few times.

“We took care of business in the second half and played a lot sharper. That’s something we will have to work on going forward — coming out with more energy.”

Jones’ 3-yard TD run turned Barnesville’s first possession into points. Hannahs went over from 10-yards out to cap a drive that started after the junior intercepted a Central pass.

“Honestly, in the first half, we had four drives and scored twice. On the other two, we had penalties that put us behind the sticks and we put the ball on the ground,” Allen said. “We just really cut that stuff out in the second half and we were able to finish drives.”

The Shamrocks put 23 points on the board in the third quarter than added two more touchdowns in the fourth after both teams had emptied their benches.

“They are as good as we thought they were and in all honestly, I thought for two quarters we were as good I thought we were,” Central coach Anthony Agresta said. “They upped their game in the second half and we couldn’t match it — it’s as simple as that. We need to get to the level where Barnesville is and we are climbing. Our kids really showed up in the first half.

“Because we weren’t able to match their level of play, the result was what it was at the end. On the last couple of scores, we had cleared the bench and let some young kids play. I don’t think the final score is necessarily indicative of what happened.

“Needless to say, if we would have brought what we brought in the first half, it would have been a much more competitive game through four quarters.”

Spencer Bliss got the second half scoring spree started when he scooted 29 yards for a touchdown. Owyn Wise went in from a yard away. Hannahs’ run for the conversion put the OHSAA mercy rule into effect. Gavin Carpenter, a two-way senior lineman who moves to the backfield as a blocker in Barnesville’s Power I formation, closed the third quarter with a 3-yard plunge.

Salvador Almaraz had a 2-yard TD run in the fourth and Camden Carpenter traveled 30 yards for the game’s final six-pointer.

“Wow,” Allen said when informed of the seven-player touchdown parade. “That’s pretty cool. We have a lot of athletes and we try to get multiple guys involved. That’s a good thing and that might be a first for me.”

Bliss and Owyn Wise led the Shamrock ground attack with 79 yards each. Bliss also caught five passes for 73 more yards. Hannahs threw for 77 and rushed for 71.

Central finished with 27 rushing yards and just 17 through the air. The Crusaders had four first downs and punted the ball away eight times.

“It’s great to be 4-1,” Allen said. “We played hard and came out healthy. I told our guys with 16 teams making the playoffs, the season is a marathon, not a sprint.

“We want to keep building, keep improving and work to get better every week. We’re in a good spot right now”

Barnesville currently is sixth in the Division VI, Region 23 standings.

After playing its last five games at home, Central will hit the road Friday for a trip to Conotton Valley.

“Our schedule has been tough since I have been here,” Agresta said. “There’s no time to feel sorry for yourself, no time to lick your wounds.

“You have to get back in the weight room on Monday then get back on the practice field Tuesday. We have to get prepared to play a good Conotton Valley team.”

Barnesville will make a return trip to Jefferson County for a Friday date with Toronto.

“We watched Toronto last night and they lost a heartbreaker,” Allen said. “They are a good football team. We know we are going to be in for a tough one when we go there.”