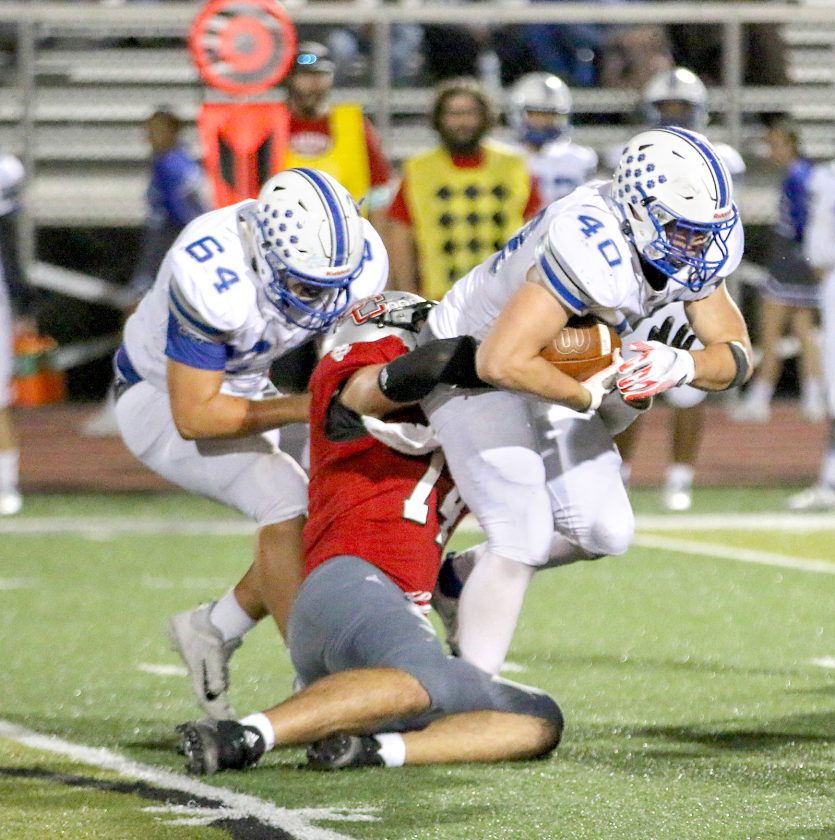 McLean did say his mood was tempered by a scary situation midway through the fourth quarter when a Harrison Central player and a member of the Red Devil Stadium camera crew both had to be taken from the facility via ambulance.

“We had a good week of practice in preparation and I just hope everyone is healthy. That kind of shakes you up there at the end with what happened to their kid and our girl. We have heavy hearts leaving the field.

“I don’t want to take anything away from the way our kids played. They were excited. I thought we were physical and ready to go right out of the gate again tonight. It’s going to get tougher down the road. I hope we can get prepared for it.”

Harrison Central (2-4) head coach Anthony Hayes was obviously shaken by the incident which occurred with 7:46 left to play.

“I’m not sure. They are going to take him and get a look at him,” Hayes said of freshman Brodie Yeager. “I don’t want to speculate without knowing. We just pray he is okay and I’ll be in contact with his parents shortly to see how things are going.

“St. Clairsville is a really good football team. This is probably the best team I’ve seen them have since 2012,” Hayes added. “They pretty much did what they wanted, when they wanted to and how they wanted to. They did it pretty darn well every time.”

Indeed they did, exploding for 21 first-quarter points and leading 35-0 at halftime.

Jordan got the scoring started with a 10-yard scamper around his right end on the Red Devils first possession. Sefsick got his outstanding night started with a 12-yard strike to Oberdick on a crossing pattern in the end zone. He then found tight end Porter on a similar route from 14 yards out.

Woodford hauled in a 42-yarder and Oberdick outleaped a trio of Huskies to haul in a 64-yard pitch-and-catch.

Sefsick finished 9 of 12 for 224 yards. Oberdick caught three for 92. Colt Westlake had two receptions for 72 yards and Woodford landed two for 49.

“We play what we feel is the hot hand and tonight it was our passing,” McLean said. “Our quarterback and offensive line did a great job and a couple of different receivers stretched the field, got behind them and made plays on the ball.”

Cam McAfee accounted for the Harrison Central touchdown with a 33-yard interception return early in the third quarter. Jace Madzia added the PAT.

Jordan broke loose for a 52-yard scoring jaunt and Jacob Meager added the first of his two placements. Jacob Walker added a 11-yard run and Dino Burk had a 19-yard burst.

Jordan had 114 yards on just eight totes as the Red Devils ran for 187.

Meanwhile, the Huskies only managed 30 yards on 29 carries. Nathan Bertolino had 46 on 12 carries, but four other ballcarriers had negative yardage.