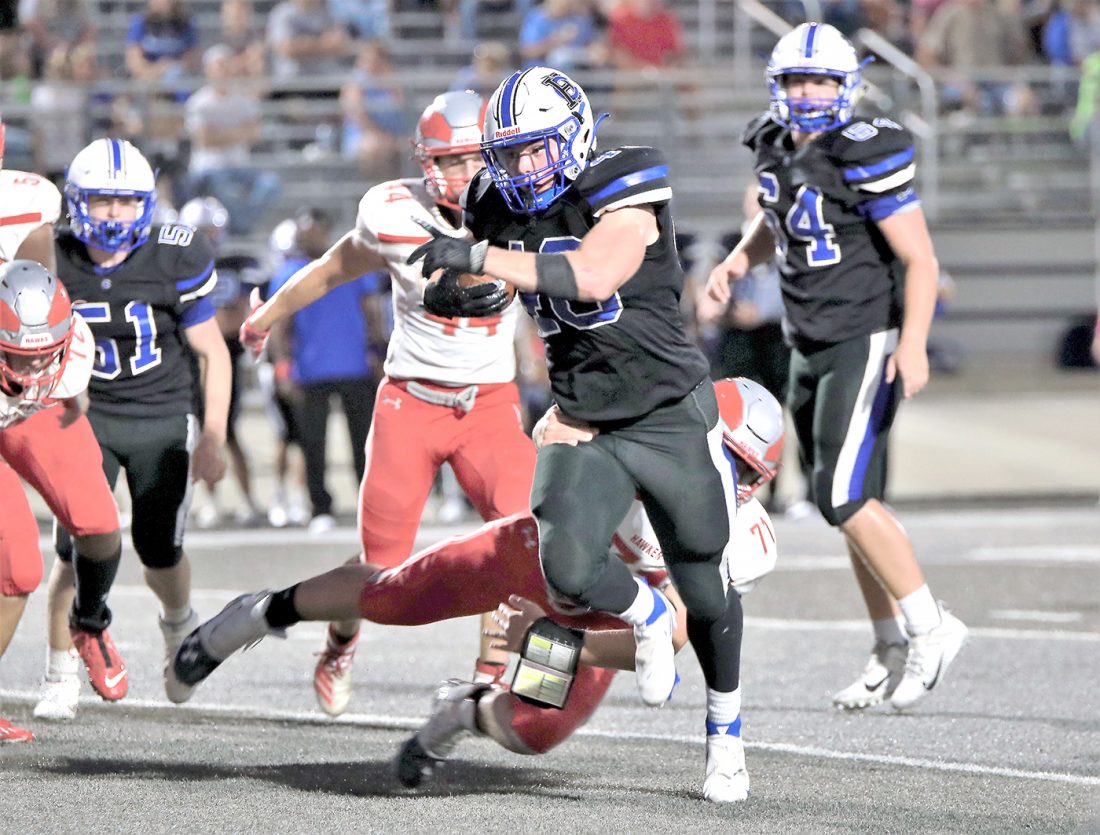 LEADING THE WAY — Harrison Central’s Nathan Bertolino is one of the area’s top rushers, and will look to have a big night when the Huskies travel to St. Clairsville on Friday to play for the Coal Bucket Trophy. -- Sandi Thompson

He also knows from experience, as tough as it may be, it’s not an impossible one to conquer.

“Our kids are well aware of the tall task that’s ahead of us, but we like that, that is what this game is about,” Hayes said. “Our kids are looking forward to it.”

The last time the Huskies visited St. Clairsville in 2019, Hayes and company left Red Devil Stadium with a 42-35 win in a thriller and in possession of the Coal Bucket Trophy.

While the current Huskies, who sit 2-3, most likely won’t be picked to win by many, if anyone, outside of Cadiz, neither was the group that entered Red Devil Stadium two years ago with a 1-4 record.

“Whether they are favored by 50 points or 10 points, we want to make the point that we want to be competitive and we want to win the Coal Bucket. Otherwise, we wouldn’t put in all the work all summer and in the weight room during the offseason.

“We always expect to win, whether it’s St. Clairsville or anybody else, and I think our kids are buying into that. All we ask of them is to give us their best effort, give everything that you can. If they do that, then I can live with (the result).”

St. Clairsville got a little revenge a season ago, taking a 35-20 victory at Wagner Field.

This year’s version of the Red Devils, sitting 4-1 and ranked third in Division IV, Region 15 in the latest OHSAA playoff computer rankings, might be an even tougher task than the previous two versions that entered the battle for the trophy with records of 4-1 and 5-0, according to Hayes.

“They are a very good football team,” Hayes said. “They are well-balanced. I think this is maybe the best St. Clairsville team I’ve seen since the state runner-up team in 2012.

“On both sides of the ball, they’re good up front. They have outstanding skill. They platoon guys, so when you can run an offensive unit out on the field and turn around and send a completely different group out on defense, that’s pretty impressive.”

St. Clairsville, coached by Brooke graduate Brett McLean for the past two decades, has gotten things rolling the past three weeks after its lone blemish in Week 2, an 18-14 setback to Wheeling Park.

The Red Devils average 37 points per game and allow just 16.

“We have to focus on things that we can control,” Hayes said. “We understand the task that is ahead of us. What we can do is make sure we are prepared and then execute with great precision on Friday night.”

The Huskies, on the other hand, are trying to turn things around, having dropped three straight games after starting the season with back-to-back wins.

In fact, neither the Devils nor Huskies played their originally scheduled opponents last week, as the Huskes had to replace East Liverpool and St. Clairsville had to find a stand-in for Indian Creek.

“We were in a similar situation last year late in the season, we lost an opponent and played Waynedale,” Hayes said. “For us, it was just unfortunately more of the same of what it was like last year where you’re preparing for a team every day and then all of a sudden in the blink of an eye your opponent is gone and you’re trying to find a new one.

“I was very proud of our kids and the way they competed. We played a lot of kids that had never seen varsity action before. They were thrusted into a tough situation. My coaching staff did a good job getting the young guys ready to play and the kids showed a lot of heart and courage.”

Harrison Central’s offense is led by sophomore quarterback Hayden Cassidy, who has thrown for 522 yards and five scores, but has thrown five picks.

Nathan Bertolino is on pace for a 1,000-yard season, sitting at 500 yards and four scores while averaging about 6.6 yards-per-carry, and is second in the area in rushing.

The kick for the 23rd meeting between the schools is set for 7:30 p.m. Friday at Red Devil Stadium. St. Clairsville leads the all-time series, 18-4.

“It’s nice to bring those communities together and let them clash on a Friday night and someone gets to walk away with bragging rights for a year.”