Edison rallies from 20-0 deficit to win 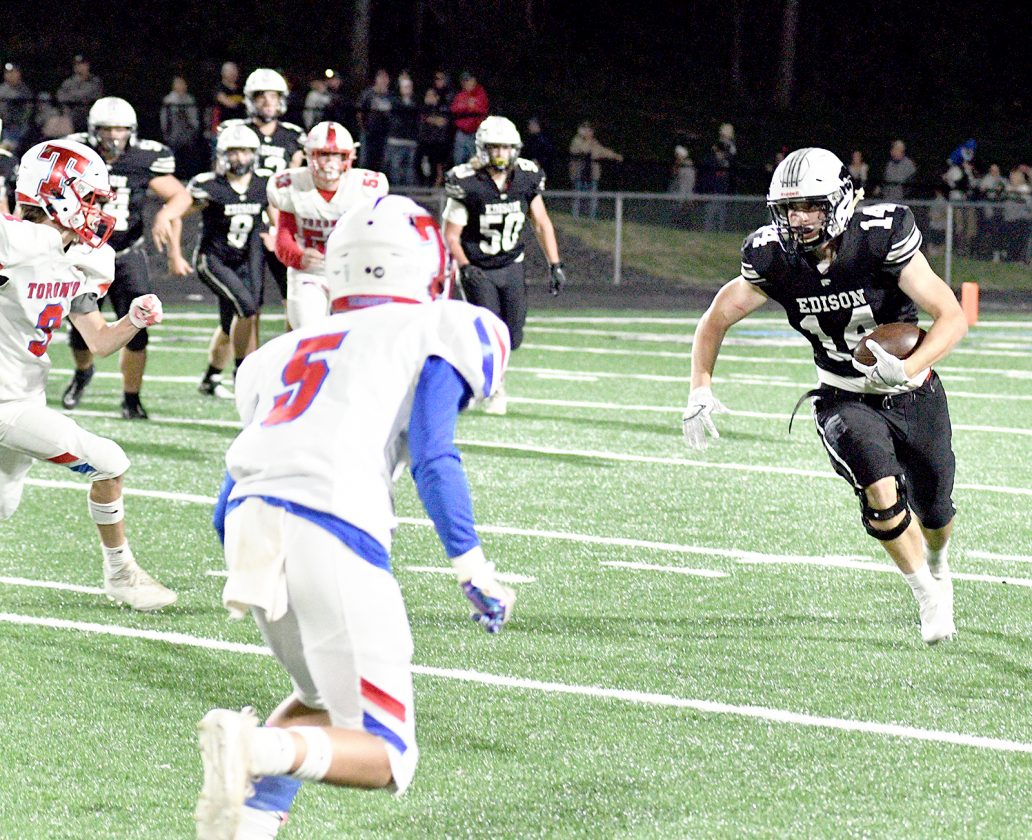 RICHMOND — Edison would not be denied.

Playing with heavy hearts, the Edison football team found itself trailing by 20 points with less than seven minutes remaining in the third quarter against rival Toronto.

The Red Knights seemed to have the game in hand, however, the Wildcats scratched and clawed their way back into the game.

Edison fought back and pulled within six points in the fourth, and the Wildcats took advantage of a botched snap on a punt and took their first lead with 1:35 left to play.

Toronto had one-last chance to pull out the victory, however, two passes into the end zone fell incomplete allowing Edison to escape with a 21-20 victory on homecoming Friday night at the Edison Unified Sports Complex.

“Our kids are hard-nosed,” first-year Edison (4-2) head coach Mike Collopy said. “They are mentally strong. A lot of teams when they got down 20-0 would have thrown in the towel.

“In the locker room there was not a lot of screaming and yelling. It was all about execution. Our kids played their butts off. Tyler (Griffith) stepped up and made some plays. Jacob (Cusick) stepped up and Jayden (Wright) made a big play.

Toronto had two chances from Edison’s 24 to win the game, but both passes hit the ground — the last coming as the final second ticked off the scoreboard clock.

“This loss is on me,” Toronto (2-4) head coach Josh Franke said. “Absolutely, it is a heartbreaker. This is a tough loss.

“The kids played really hard. They deserved to win this game. I let them down at the end.”

Trailing 20-0, Edison got onto the scoreboard when quarterback Gage Cline dove into the end zone from the 2, and Mason Montgomery kicked the first of his three extra points on the night to pull the Wildcats within 20-7 with 6:20 remaining to be played in the third quarter.

Edison’s deficit was still 13 points with less than four minutes to play, however, the Wildcats refused to go away quietly into the night.

Cline hooked up with Griffith for an 18-yard score, and Montgomery once again booted the extra point pulling the hosts to within 20-14 with 3:30 left to play.

The Red Knights started the ensuing drive at their own 22, however, they were not able to get anything going, in large part to two 5-yard penalties, and the visitors were forced to punt.

That is when disaster struck.

The snap was dropped, and after the ball was picked up the punt traveled a mere 12 yards giving the Wildcats the ball at the Red Knights’ 32 with 2:54 still showing on the scoreboard clock.

The winning drive was aided by a 15-yard penalty, and after Wright caught an 11-yard pass down to the Toronto 3, Cline once again scored on a quarterback keeper to knot the score at 20. With the pressure on, Montgomery calmly split the uprights on his extra point to give the Wildcats a 21-20 lead with 1:35 remaining in the game.

“It was a matter of us dressing 22 kids tonight,” Franke said. “They have close to 50 on their roster. Our guys just wore down. We had guys cramp up. Our kids were exhausted. They played hard until the end.

“Defensively, I thought our kids played really well. Our kids battled all night. I am proud of them. They played their hearts out.”

In the end, Edison made one final defensive stop to secure the victory.

The Wildcats put themselves immediately behind the 8-ball. Edison was forced to punt from its own 20 on the first drive of the game, however, the punt was blocked, and Toronto’s Seth Thomas recovered the ball in the end zone giving Toronto an early 6-0 lead. Shane Keenan kicked the extra point giving the visitors a 7-0 advantage 1:11 into the game.

“We fell behind early,” Collopy said. “They blocked a punt right off the bat. That is something you don’t want to see happen. Things were going in their favor early on.

“Toronto has got some really-good players. They play tough defense. They are a good team. They play hard.”

The Red Knights added their second touchdown of the night with less than two minutes left in the quarter.

Quarterback Aidan Mick found Shane Keenan open in the end zone for a 20-yard touchdown to give the Knightsd a 13-0 lead. The 2-point conversion pass failed, keeping their advantage at 13 points with 1:44 left in the first.

Toronto tacked on another touchdown in the final minutes of the second.

This time, Keenan rambled around the end on the far side and ran 38 yards down the sideline for Toronto’s third touchdown.

Keenan kicked his second PAT making the score 20-0 with 2:31 left in the first half.

“We were not executing,” Collopy said. “We were behind the sticks. I made some bad calls on defense.

The game was reminiscent of a game played 11 years ago against St. Clairsville at Cartwright Memorial Field. The Red Devils led the Wildcats, 21-0, in the second quarter in that game only to see Edison storm back and win the game.

“They don’t remember that game, but they will remember this one,” Collopy said.

There were moments of silence for the two men, balloons were released and video tribute played on the scoreboard.

“Our hearts go out to their families,” Collopy said. “We are all competitive, but sports are just a small part of our lives. When things like this happen, it puts things in the proper respect for adults.

“We have kids who played for Coach Smith, and we have kids who rode Mikey’s bus. Unfortunately, when things like this happen to young people who are gone too soon. It is not easy to put into words. It is tough. Our thoughts are with their families.”

Meanwhile, Toronto will play Barnesville Friday night at Clarke Hinkle Field. The Red Knights will be celebrating their homecoming night against the Shamrocks.