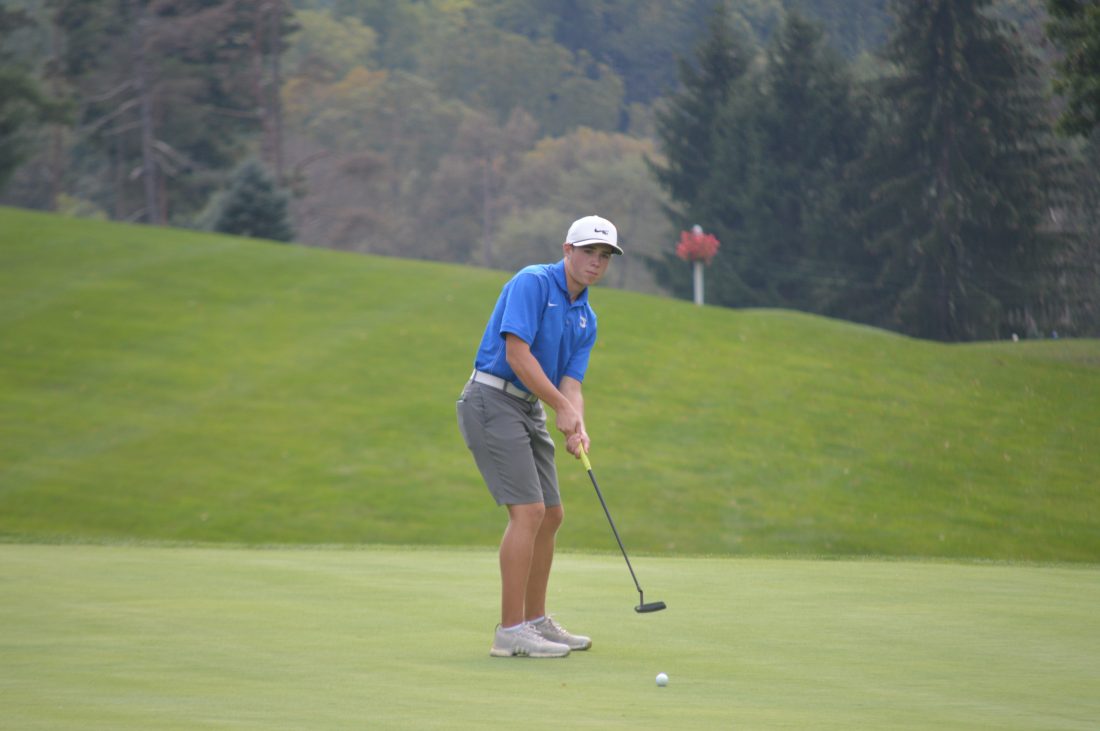 WHEELING — One year without an OVAC team trophy was long enough for the Wheeling Central golf team.

Coach Jim Mortakis and the Maroon Knights returned to glory on Tuesday at Oglebay’s Crispin Course as they won their sixth OVAC 1A/2A championship in the last seven years and their eighth title in the last 10 seasons.

“Our kids work really hard and they practice hard all the time and I’m just proud of them,” Mortakis said. “We had four out of five golfers hit in the 70s and we’ll just keep plugging along.”

Leading the charge for the Knights was junior and defending individual champion Justin Doerr with a 71. For most of the day it looked like he would be the winner until Frontier’s Karter Satterfield finished with a remarkable score of 69 to earn medalist honors

“I would have liked Justin to be able to play with Satterfield so he would have known where he stood but I’m happy that we still had three out of the Top 5 golfers,” Mortakis said.

Doerr finished second, while Wheeling Central’s Ryan Costanzo and Nate Woods were also named All-OVAC with cards of 74 and 75, respectively. Landon Prager (78) and Luke Tiu (82) were solid for Wheeling Central, as well.

“That’s what is great about it, they all make each other push harder,” Mortakis said. “Ryan tries to push Justin everyday and Nate is a newcomer and he is a really long hitter. Luke is a freshman and Landon came through with a really good round and I couldn’t be more proud of them.”

Doerr drained three birdies on the day, which included the par three No. 1 and two par fives (No. 4 and No. 12). He came close to garnering three more on 15, 16 and 17 but the first two birdie putts sat on the lip of the cup and did not fall and the third lipped out.

“I hit it pretty well but not a lot of putts fell for me,” Doerr said. “But that’s just golf. It’s nothing to be ashamed of. I shot a 71 but I had 33 putts. If I make more putts I probably win but it is what it is.”

Doerr defeated Steubenville Catholic Central’s Cole Tegano a year ago in an overtime hole in the OVAC final and he received a good luck text from his old foe before teeing off.

“Cole has kept in touch and has always been really nice to me,” Doerr said. “I look for him to have a lot of success at Cal U (of Pa.).”

As for the overall winner, Satterfield finished fifth last year with a score of 80, which he improved this year by 11 strokes.

“I missed a lot of putts this year and last year but last year I was ripping the driver on every hole and I played stupid,” Satterfield said. “This year, I took it easy and kept my focus.”

“I worked all summer, spring and all of last year for this,” he said. “I fell short at sectionals and at OVACs so I just kept grinding and this means a lot.”

Monroe Central’s Zander Potts placed fifth for All-OVAC honors with a card of 77.

WEIRTON — It took a couple of weeks longer than expected, but the Blue Dons will finally take the field at Jimmy ...

Golden Bears out of quarantine in time for a tough test

NEW MANCHESTER — The Oak Glen football team has had a rough couple of weeks, and this week isn’t going to be ...

Two area teams scheduled football games for Friday night have been canceled due to COVID-19. Brooke was ...

CALCUTTA — The Edison football team looks to continue its winning streak against a familiar face.  Thanks to ...