Creek’s mistakes too much to overcome 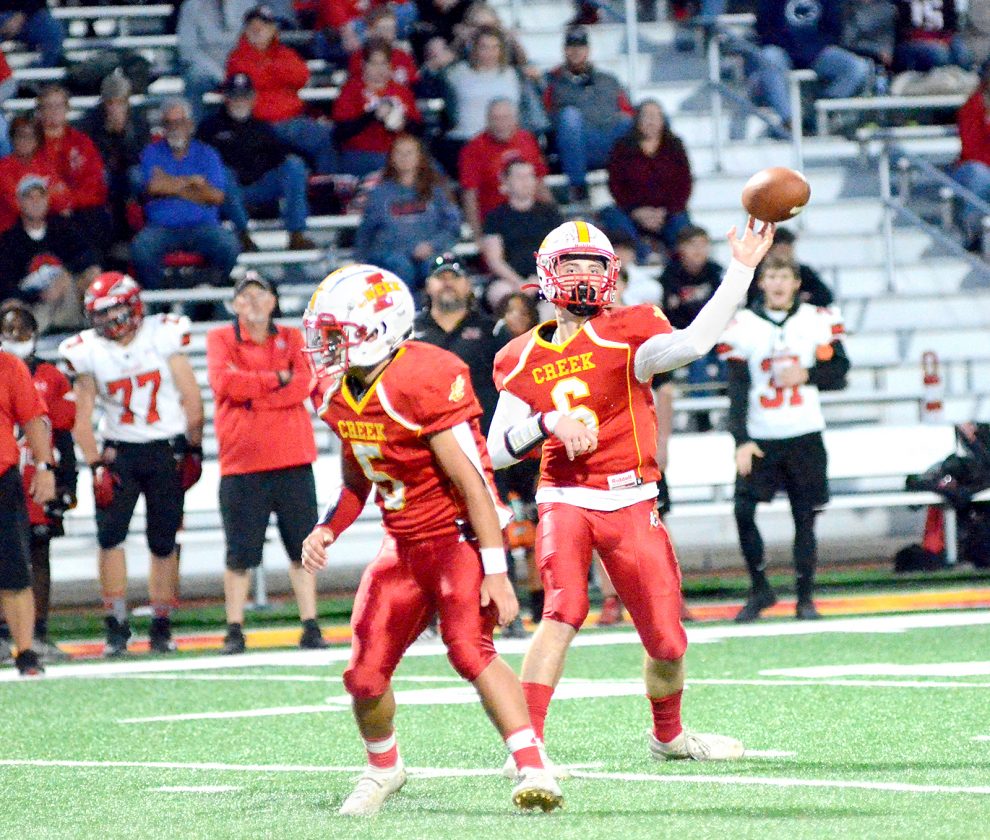 WINTERSVILLE — After some costly early mistakes and trailing by four possessions at the half, Andrew Connor wanted to see his Indian Creek football keep playing hard.

It did, cutting a 27-point deficit to 15 in the third quarter and seeming to have all the momentum, however Bellaire showed why it is unbeaten and received votes in the state poll, squashing the hopes of a homecoming comeback and staying perfect with a 41-19 decision at Kettlewell Memorial Stadium Friday night.

“That game could have easily gotten way away from us, but I think our kids played hard,” Connor, the veteran Indian Creek coach, said. “The one thing you tell your kids is you have to pick yourself back up.

“Bellaire is a very good football team. They’re, big, physical, they have a lot of weapons … We battled to the end, and that’s all I can ask the kids to do is battle to the end.”

Of the Big Reds’ 41 points, 21 came off the Redskins turnovers.

“There are some mistakes you can overcome, these mistakes were big ones against a team as good Bellaire,” Connor said. “You look at the final margin of the score and think about what could have been.

“The kids are working hard. We just have to get better.”

After Creek’s defense forced a three-and-out on the first possession of the game, the offense fumbled the ball away at the 3 yard line, and three plays later Bellaire got on the board first with Colt Sechrist’s first of two touchdown catches in the game.

On the next Creek play from scrimmage, Ray’Shad Pettigrew stepped in front of a screen pass and took the ball 35 yards to make it a 13-0 Big Reds (6-0) lead.

“They ended up having three plays and two touchdowns,” Connor said.

Bellaire quarterback Jake Heatherington added a pair of rushing touchdowns in the second quarter from 9 and 2 yards out, capping drives of 12 and 13 plays, to make it a 27-0 halftime lead for the team that entered the week ranked fourth in Division V, Region 17.

“We played pretty smart, pretty athletic and pretty good on defense,” Bellaire coach Mark Spigarelli said. “Our defense has been playing well all year. A lot of credit goes to those kids. They want to win.”

The Redskins (0-5) caught a break when the Big Reds jumped offsides, making a fourth-and-6 a fourth-and-1, prompting Connor to send the offense out to replace the punt team.

On that fourth down play, Creek converted, then, two plays later, Eli Powell connected with C.J. Spencer on a short pass and the junior took the ball 40 yards for Creek’s first points.

Later in the third quarter, Powell broke free on a 69-yard run to down inside the Bellaire 10, then, on fourth-and-goal from the 10, hit Sam Coleman for his only catch of the night, a nice grab in traffic on a slant pass for another score to make it 27-12.

“One of the things you talk about at halftime is, ‘Are going to just go back out and go through the motions, or are you going to battle?’ We want our kids to battle for 48 minutes and they battled for 48 minutes,” Connor said.

That, however, would be as close as it would get, as on the next Bellaire play Brayden Roth went 76 yards to quickly thwart the building momentum Creek had.

On the ensuing kickoff, any final hopes of a comeback were dashed when the returner fumbled the ball and the Big Reds jumped on it — leading to Sechrist’s second touchdown catch of the night to make it 41-12.

“That was big-time, because we were really hurting,” Spigarelli said of the quick scores to pull back away. “Myself, I was a little afraid, because I’ve seen too many games, been involved in too many football games in my life where everything can swing, and they got the momentum.

“What kept them in the game was we had too many penalties. Roth broke that big one and that kind of broke their back.

“We expected (Indian Creek) to keep playing hard, they always do. I knew it would be a battle because records don’t matter and Andrew (Connor) is doing a super job with those guys.”

Creek freshman Zion McGee made the most of his chance to play in the fourth quarter, racking up 57 yards, most of which came on one drive and a late score to make it a 41-19 final.

“I think there was some improvement, especially in the second half,” Connor said. “Other than the one big run, defensively I think we made a turn for the better. We had been giving up so many big plays.

“The loss, of course, is still on me. But I think our kids are trying their best, they’re working hard to the end. The effort it great. Mistakes have kind of been our downfall.”

Bellaire: Faces a tough run of games to end the season, starting with a battle with 5-1 St. Clairsville.

Indian Creek: Will play its second home game and look for its first win against 1-5 Martins Ferry.