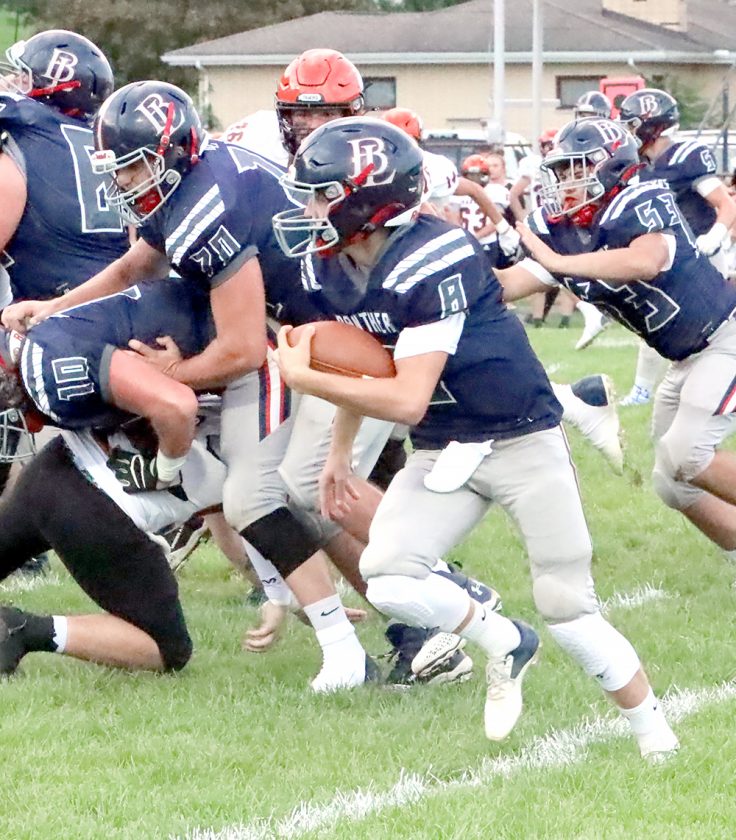 THURSDAY NIGHT BATTLE — For the second time this season, Skyler Ebright and the Buckeye Local Panthers travel to play on a Thursday, taking on Monroe Central tonight. -- Joe Lovell

WOODSFIELD — In his third game at the helm, after a couple of tough losses and a quarantine, Jim Hoover finally saw things start to come together for his Panthers in Friday’s win over Toronto.

This week, the Panthers take the show back on the road for a showdown with Monroe Central tonight looking to get back to the .500 mark with added attention of playing a day earlier than normal.

“Things definitely started coming together (against Toronto),” Hoover said. “Going into the Shadyside game (in Week 3), we had three practices in two weeks, that’s tough for anybody, it doesn’t matter how good guys think they are. They need their reps.”

Getting the first win was big for the Panthers, who’s losses in their first two games were a 17-14 nail-biter to 2-1 Barnesville, which is ninth in Division VI, Region 23, and the AP Poll ranked Shadyside Tigers, 4-0 and second in Division VII, Region 27. The Tigers are also the Shamrocks only loss.

With last week’s win over the Red Knights, Buckeye Local finds itself sitting in 20th in Division V, Region 17, four spots behind the playoff cut.

“They’re resilient, they don’t have a lot of kids, but they play hard,” He said of Monroe Central. “It’s impressive to watch. I was there when they played Union Local and guys that have eligible numbers will come over to the sidelines, take their jersey off and put a linemen number on when somebody goes down.

“You talk about a team that’s all for one and one for all, they’re the definition of it.”

In the win over Toronto, the Panthers were finally able to get the ground game going in their best offensive showing of the season, with two players topping the century mark.

Sophomore quarterback Skyler Ebright ran for 147 yards and a score, while hard-running junior Trey Hoover added 118 yards and two touchdowns, the best showing of the season for the 2020 Herald-Star/Daily Times coverage area rushing leader. He has 197 yards and three scores on the season.

In last year’s meeting with Monroe Central, he ran for 202 and two scores and threw for another TD.

“If we keep playing like we did Friday night against Toronto, we will be fine,” coach Hoover said.