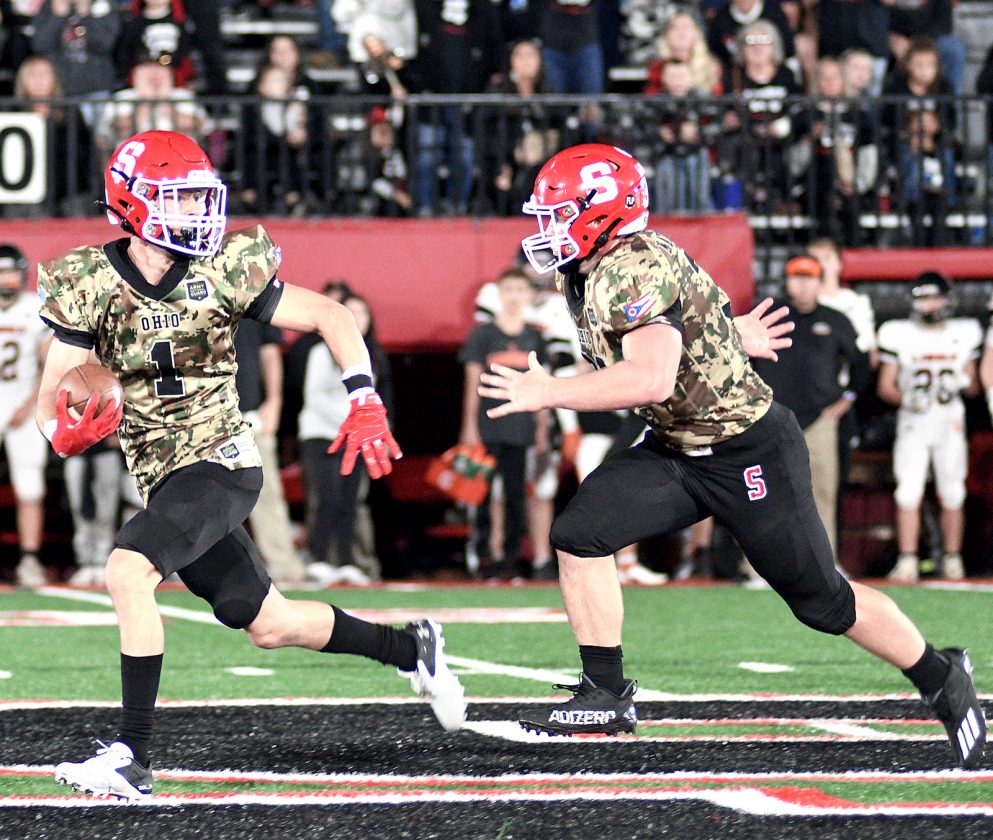 Michael D. McElwain IN THE CLEAR — Big Red’s Niko Suriano has room to run with Spencer Ostovich looking to make a block during Friday’s game against Linsly at Harding Stadium.

With the bounce-back victory, Steubenville, the eighth-ranked club in the Ohio AP Division III poll, improved to 5-1. The Cadets fall to 3-2.

“That was a very hard-fought football game,” Big Red coach Reno Saccoccia said. “I hope Linsly respects us as much as we respect them.

“It was great to bounce back (Steubenville fell for the first time last week at Dover) with a victory. A lot of teams lose two in a row — the next one is never easy. It’s easy to say you are going to bounce back but you have to work extremely hard to make it happen.”

Big Red grabbed an early 7-0 lead when Savier Faulks capped a 99-yard drive with a 21-yard run. Austyn Roberts nailed his conversion kick. A key play on the march was a 28-yard Phaeton Hill to Tylik Sims completion. The Cadets made it 7-3 late in the opening quarter when Felix Reitter split the uprights with a 36-yard field goal.

Late in the second, Linsly stunned the hosts with a 70-yard touchdown pass from Collin Paull to Luca DiLorenzo. DiLorenzo started the scoring play by throwing the ball to Paull behind the line of scrimmage. He then found the speedy DiLorenzo all alone in the Big Red secondary for the touchdown.

Steubenville appeared to answer late in the quarter as Nico Suriano picked off a DiLorenzo pass and returned it 70 yards. The apparent touchdown was nullified by a personal foul.

Saccoccia’s club took the second half kick and marched 70 yards for a go-ahead touchdown. It came on a 34 yard pass from Hill to Inky Jones. On its next possession, Steubenville went 72 yards, scoring when Hill connected with Jace Kernahan from 13 yards out.

Linsly closed the gap to 19-17 early in the fourth. Hard-running fullback Adam Dolata scored on a 19-yard burst to cap an 81-yard march. B.J. Depew’s squad got the ball right back when Hayden Bozich pounced on a Big Red fumble. The Cadets moved from their own 45 to the Big Red fumble before they coughed up the pigskin, Gavin Bozica recovering.

After its defense forced a punt, Steubenville put the victory on ice, traveling 74 yards for the game’s final score. It came on a 1-run by Bozica. Linsly’s final threat ended with an interception by Elijah Mullins.

On that play, Linsly’s Debu Yi was injured. The final seconds of the contest were delayed while the junior lineman received medical treatment. Eventually, he was taken from the field via stretcher.

“We played a lot better in the second half and so did they,” Saccoccia said. “It was just a good game all the way around. Penalties killed us more than anything (Big Red drew 15 flags for 125 yards) and I got one of them.

“I never saw an ugly win — that was close to one but it was a win, a hard-fought win. If I would say anything negative about the win, then I wouldn’t be respecting Linsly.”

“I’m really proud of this football team,” he said. “They fought hard for four quarters against an excellent program. I am really proud of the way we were able to maintain our composure in a stressful situation and some frustrating times.

“Give Steubenville credit for playing the game they did. I give our kids a lot of credit as well.”

Big Red finished with 480 yards (357 rushing and 123 via the air) of offense. Spencer Ostovich led the ground game with 172 yards on 18 carries. Bozica finished with 87 and Faulks 76. Hill completed eight of his 18 passing attempts.

“We had a lot of guys step up tonight,” Saccoccia said. “It’s easy to say next man up, but it’s not always easy to do.

“The momentum did feel like it would come to our sideline from time to time and our guys were responding,” Depew said. “We had a turnover there late and a poor possession at the end. Those obviously are things we will look back at with regret and some what ifs.

“But, you can’t beat a good team, especially a team like Steubenville, without playing a near perfect game.”

Big Red will welcome Columbus DeSales to Harding Stadium on Friday. The kickoff for that game has been moved to 6:30 p.m.

“Keep grinding,” Saccoccia said when discussing what’s next for his squad. “Nothing great comes easy. We know we have to get better.”

Linsly returns to action on Oct. 2 with a home game against McGuffey, Pa.

“Every team on our schedule is pretty darn good,” Depew said. “So, there really are no breaks for us.

“Obviously with another injury tonight, it will be next man up. We’ll have to rally around each other, hopefully level off emotionally and get back at it next week.”