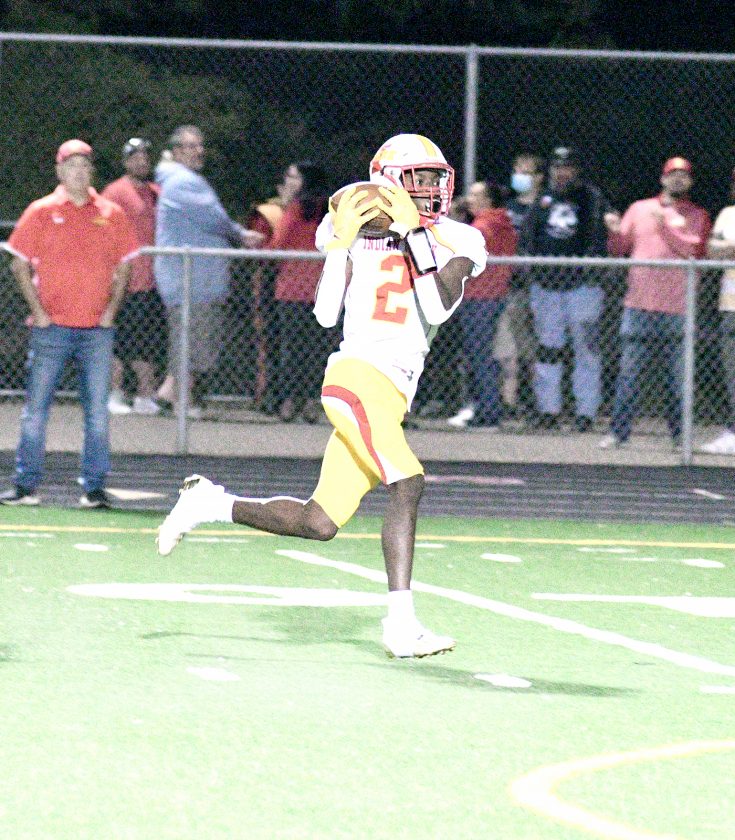 WINTERSVILLE – With four straight losses to open the season and a week off due to COVID, the last thing that Indian Creek might need to see Friday night is an unbeaten Bellaire team, which has been punishing opponents, coming to town for a Buckeye 8 football contest.

However, that is exactly what coach Andrew Connor and his Redskins will be facing when Mark Spigarelli and his powerful 5-0 Big Reds take their show to Jefferson County.

Bellaire has been nothing short of spectacular with a high-powered offense, led by a bruising rushing attack, and a defense that has allowed just 55 points through five games. The Reds pounded a bigger Cambridge squad by a 45-14 margin Saturday at Nelson Field.

Meanwhile, Creek’s contest at St. Clairsville had to be canceled last week and the Redskins have not played since a gut-wrenching 19-14 setback at Weir High two weeks ago.

“Our success so far is a real testament to our kids, not so much the staff,” Spigarelli said. “They pay attention during film and at practice and they listen. Things like that allow you to go out and execute and our defense has been getting a lot of turnovers while the offense is doing a great job taking care of the football. Those things are big keys.”

But, while Bellaire has been rolling, outscoring their opponents by a 167-55 margin, Spigarelli is well aware of the fact that staying focused this week could be a major issue with huge games against St. Clairsville (4-1), Shadyside (5-0) and Union Local (4-0) coming up over the following three weeks.

“This is my sixth season here and I know as well as anyone when you play teams whose records may not be very good it can be a struggle to get your team prepared,” Spigarelli said. “Trap games happen. You have got to keep the kids involved as much as you can, keep them motivated and continue to do the little, detail-oriented things.

“The last five games on our schedule are always a struggle with big rivalry games such as St. Clairsville, Shadyside, Union Local and Martins Ferry and it doesn’t matter what anyone’s record is in those games.”

As long as the Big Reds stay healthy, they can play with anyone. A strong offensive line paves the way for a rushing attack that features junior Brayden Roth, who has rushed for nearly 400 yards, senior Youngstown State University recruit Colt Sechrest, who is a threat anytime he touches the ball in any capacity, and junior Joey Lewis.

Junior Jake Heatherington is coming off his best passing performance of the season, hitting 16 of 25 tosses for 225 yards and a touchdown last week and is also a threat to run the ball on any given play. Heatherington’s top receiving threats are Ray Ray Pettigrew, who had five grabs for 51 yards last week, and Sechrest out of the backfield.

“They are just so good and so balanced on offense,” Connor said. “They can run the ball at will and throw the ball when they have to and they have so many weapons to do it with. They are very tough to stop because you can’t just go out there on defense and concentrate on any one thing.

“On defense they have two, three, four guys getting to the ball every play. They are very athletic, and coach Spigarelli and his staff do an outstanding job with them.”

The Redskins are led under center by Eli Powell, who was 5 of 7for 75 yards and a score against Weir two weeks ago. He has a nice, athletic receiver in Sam Coleman, who caught all six of Creek’s completions for 87 yards and a score in that game. Senior Jordan Irizarry rushed the ball 21 times for 84 yards.

Mistakes have plagued Connor’s squad through four games and Creek has allowed 109 points while scoring just 47.

“We know they are a team that likes to run the ball, but they have been spreading things out more this year as well,” Spigarelli said of Indian Creek. “The Coleman kid is a real good athlete, and they do what they can to get him the football, we definitely need to be aware of where he is on the field.

“They have played a couple of quarterbacks, and both have done a pretty good job running things. They have been running a similar offense to what Wheeling Central runs, so we feel good about the fact that we have already seen that once this season.”

For Indian Creek it has been a tough season both on the field and off, with last week’s COVID situation.

“I’m not happy about the week off, I really believe it is a negative thing,” Connor said. “These kids work hard to be able to go out there and play games and it’s hard when you lose a game, I don’t wish that on anyone. The good news is that when we have been on the field the effort of these kids has been great.

“I am very proud of how my kids have gone out and played. Yes, things have gone wrong, and we have had a lot of self-inflicted stuff hurt us on both sides of the football, but we continue to work and play. And, we will continue to work. I had to go five days without having these kids, but they (came) back Tuesday, and we (started) getting ready for Bellaire at that point.”

Friday night’s meeting between the two schools will be the first since Bellaire secured a 31-13 victory over Indian Creek in Wintersville in 2013.