Battle of the Riders: Weir heads to Ferry 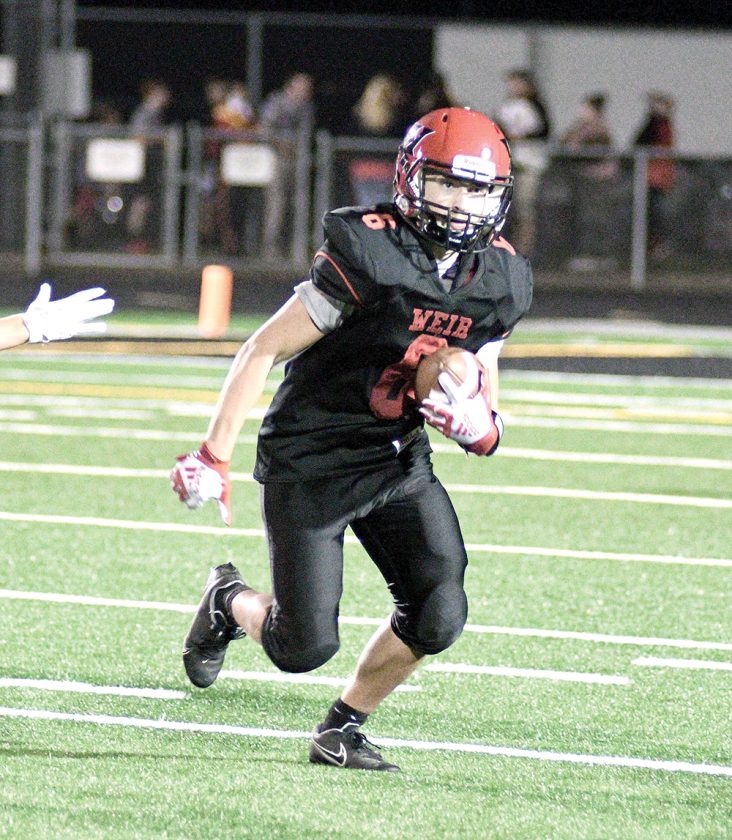 RIDERS ON THE ROAD — Carson Yobaggy and the Weir High football team look to make it two wins in a row at Martins Ferry Friday. -- Michael D. McElwain

MARTINS FERRY — There is an old adage that says winning is contagious. Weir High head coach Frank Sisinni certainly hopes that is true for his young team after it got a taste of victory last week against Indian Creek.

His Red Riders will look to carry the momentum from their first triumph of the season then they invade the Dave Bruney Complex Friday night to test a Martins Ferry team hungry to win.

“The practices are up tempo and the moral is definitely higher,” Sisinni said. “It’s amazing what a win will do for a program, yet alone a team that had not had a win yet this season. That is one thing our young kids need is some confidence, and we saw that with the win against Creek. Anytime you start a week after a win, it’s a different vibe for sure across the board.”

The Purple Riders are 0-4, but Sisinni knows that mark may be a bit deceptive when one looks at who coach Chas Yoder’s group has faced this season.

Ferry has losses to AP Poll ranked, unbeaten Shadyside, unbeaten Linsly, unbeaten Union Local and 3-1 St. Clairsville, who’s only loss is to Wheeling Park. The combined records of those teams is 13-1.

“They are 0-4, but at the same time they’ve had a very challenging schedule,” Sisinni said of Ferry. “We are very aware of the opposition they have faced. Their game with Union Local was close. The programs that they’ve faced are definitely tough. They are definitely battle-tested.”

And, regardless of their record or who they’ve played, Sisinni knows the tradition and pride a Ferry team will play with is going to be a challenge to face in itself.

“It’s Martins Ferry football, we know what we’re going to get,” he said. “We found out last year real fast. It’s a quality program and it has been for years throughout the Valley through the decades. We know going down there is going to be an extreme challenge.

“They’re physical up front and they run the ball, so we know that’s going to be a challenge,” Sisinni said. “They key is to limit (Martins Ferry’s) confidence early in the game. The key for us this week, and any week, is to get positive plays early on both sides of the ball.”

A victory would go a long way for both clubs, as Weir High is 25th in Class AA according to WVTailgateCentral.com, and Martins Ferry is outside the top-20 in the first official Division IV, Region 17 standings.

“This game is big for us for so many reasons, and we know Martins Ferry is going to press hard to get into the win column,” Sisinni said. “To have a chance to go 2-2 is big for us, we want to keep ourselves on that side of the win column. Winning becomes contagious, but so does losing.”

The Red Riders will look for another big night on the ground from Corey Lyons, who ran for more than 100 yards against the Redskins last week, and Devon Colson, who ran for 65 yards in the win.

“Corey had a tremendous game, that is really what we’ve been looking for all year is to develop something up front,” Sisinni said. “We saw that Friday night as we were able to run off-tackle and get the ball in certain guys hands. Devon stepped up for us in a big way, too, with Jamari Bass going down.

“When our kids are hitting the hole like that and we’re blocking like that, it starts to feed off of itself.”