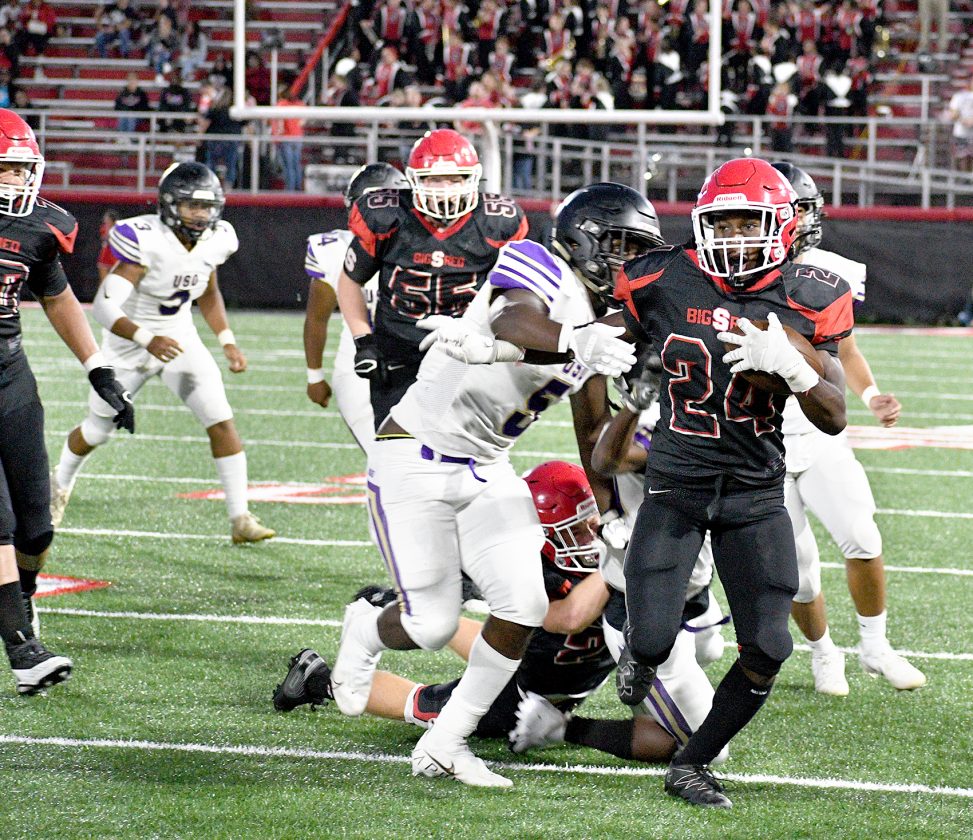 SHEDDING TACKLERS — Big Red’s Savier Faulks and his teammates picked up a big win over University Prep on Friday, and find themselves second in both the Div. III, Region 9 standings and Div. III overall in the first Ohio AP Prep Football Poll. -- Michael D. McElwain

STEUBENVILLE — It seems hard to believe, but the Ohio high school football season reaches its halfway point this coming weekend.

The OHSAA’s highly-debated decision to expand and alter the regional playoffs for 2021 brought with it an earlier than usual start to the campaign. As football fans know, 16 teams from each region will qualify for the post-season — double the amount from previous seasons.

The move, the OHSAA claims, came after positive responses from allowing all schools to participate in the 2020 playoffs due to COVID-19 rules and regulations shortening the season.

By the way, due to many games being cancelled around the state because of COVID, the OHSAA board recently lowered the minimum number of rated varsity games a school must play to five instead of eight to qualify for the playoffs.

So, the higher seeded team will host first and second round games before neutral sites are used, beginning in the in the regional semifinals. I sure wish the OHSAA would allow higher seeded clubs to host through the regional round.

With the expanded playoffs, 448 teams will qualify or around 60 percent of schools that field an 11-man football team in the state. The regular season will end on Saturday, Oct. 23 with the playoffs opening the following week. During the first five rounds, Divisions I, II, III and IV schools will play on Friday nights while Divisions V, VI and VII are set for Saturday night action.

As Week 5 approaches, it’s time to start paying close attention to the weekly computer rankings put together by Joe Eitel.

In the first Ohio AP Poll released on Monday, Big Red sits second in Division III behind Chardon by nine points in the voting. Steubenville received one first place vote in the poll.

Indian Creek, which still is seeking its first victory, is tied for 24th in Division IV, Region 15. Bloom-Carroll leads the region and St. Clairsville is 10th.

Three local squads (Edison, Harrison Central and Buckeye Local) are battling for spots in Division V, Region 17. The Wildcats currently are 11th and the Huskies occupy the 15th spot.

The Panthers advanced to 20th after picking up their first victory of the season.

The bad news in Region 17 is this — Kirtland, which has captured three straight state titles, leads the pack. The Hornets have won 44 consecutive games.

In Division VII, Region 25, Toronto sits at 16 with Catholic Central right behind at 17. The Red Knights travel to Sandusky County this week to test Kansas Lakota, a Division V school.

Meanwhile, the Crusaders can help themselves when they welcome Windham to Harding Stadium on homecoming Saturday.

NOT ONE, BUT TWO

Anyone who thinks the ground game is not a critical element of high school football success needs to think again.

During the week that was, three local schools collected victories while having not one, but two players crack the 100-yard rushing mark.

Edison moved to 3-1 with its 35-18 whipping of Mathews as Gage Cline compiled 120 rushing yards and teammate Talan McClurg added 119. Cline also had two touchdowns on the ground.

Cline also has success through the air, throwing for 206 yards and three additional scores. He connected with Jacob Cusick six times for 66 yards and a touchdown.

Cusick, by the way, continues to lead The Herald Star/Daily Times coverage area with 21 receptions for 422 yards and five touchdowns.

Big Red tuned up for its showdown at Dover by blanking Pittsburgh University Prep 34-0.

Spencer Ostovich toted the rock 13 times for 116 yards while Savier Faulks added 101 on 11 trips. Ostovich found the end zone twice on short runs and Faulks scored via a 9-yard sprint.

Rodney James Jr., the coverage area’s leading rushing, did not see action in the contest.

In four games, Steubenville has rushed for 1,027 yards, averaging 257 per outing.

Big Red quarterback Phaeton Hill, who has thrown for an area best 706 yards, completed five passes in the shutout, good for 142 yards and two six-pointers.

After getting the week off due to a forfeit by Pittsburgh Carrick, Madonna returned to the gridiron Saturday and rolled to a convincing 41-20 victory over Bridgeport.

Three of his scoring tosses went to Evan Quering, who finished with seven catches for 200 yards. Meanwhile, Seth Humberson ripped off 100 rushing yards on 13 carries. The now 3-0 Blue Dons finished with 492 yards of total offense.

Ohio State welcomed a group of recruits to campus and Ohio Stadium for the Oregon game.

Two Big Red seniors were among the recruits who were able to witness OSU’s disappointing loss to the Ducks inside “The Shoe.”

Wide receiver Brenton “Inky” Jones was joined on the trip by his teammate — Rodney James Jr.

Jones posted several photos on social media, including one with he and James posing with OSU coach Ryan Day.

Jones leads the Big Red in receiving with nine catches for 276 yards and five touchdowns. James has collected 484 yards on 58 carries and scored eight rushing TDs.

If all goes according to plan, Oak Glen will play its second game of the season this weekend.

The Golden Bears, who were shut down for two weeks because of COVID, are scheduled to host Point Pleasant Friday.

In its only outing to date, Oak Glen recorded a 35-20 victory over Weir High.

Catholic Central will have a full weekend of festivities as it celebrates 2021 homecoming. The festivities begin Thursday with the induction of a new class into the CCHS Athletic Hall of Fame.

Among the inductees will be the 1971 Central football team which 10-0 and was ranked first in the Class AA polls by both the Associated Press and United Press International. That year, the Crusaders accumulated the most computer points of any team in the state. By the way, 1971 was

the year before the OHSAA implemented a playoff system.

Other inductees are Terry Alessi (Class of 1975), Edmund Narewski (Class of 1967), Reno DiCarlantonio (Class of 1974) and Chris Delatore (Class of 1984). The induction ceremony will begin at approximately 7:15 in Lanman Hall at CCHS.