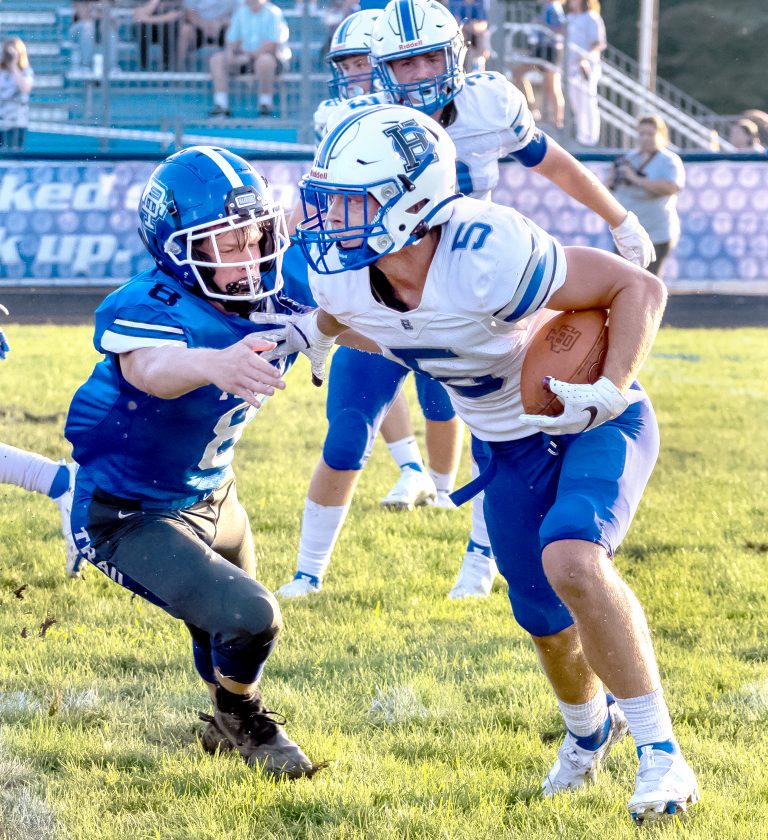 OLD WASHINGTON — Harrison Central might be 2-0 in the early stages of the high school football season. However, you couldn’t tell by Anthony Hayes’ demeanor Friday night.

Although his team rallied past homestanding Buckeye Trail, 21-14, inside the Baker Activity Complex, the Huskies head coach was not a happy camper.

“We played well defensively but we made way too many mistakes,” the fourth-year Harrison Central head coach said. “We dropped touchdowns. We had too many missed assignments. We allowed them to stay in the game and make it a game down the stretch.

One player that Hayes was pleased with was freshman wide receiver/defensive back Cam McAfee.

He caught an 8-yard touchdown pass from Hayden Cassidy to cap a nine-play, 64-yard opening drive of the game. McAfee caught a swing pass in the left flat and eluded a pair of would-be tacklers inside the 5 to waltz into the end zone. Keying the drive was a clutch 25-yard hookup between Cassidy and Tre Rex on third-and-10. Senior fullback Nathan Bertolino rumbled for 21 yards a play before the TD. Jace Madzia’s first of three placement tries was good for a 7-0 advantage.

Fleet-footed Franko Rome took an inside flip from quarterback Nick Neuhart and scooted 52 yards around his left end to the Huskies’ 5. One play later, the same combo clicked for a 5-yard scoring connection. The two-point run failed as the margin stood at 7-6.

The hosts took their first lead at 14-7 on the last play of the first quarter. Rome went off right tackle and sped 70 yards down the far sideline to paydirt. Neuhart ran for the two points.

Harrison Central couldn’t take advantage of good field position on its next possession and Madiz pinned the Warriors down inside their 5 with a bouncing punt.

On third down, a mixup in the backfield resulted in a fumble that the Huskies’ Colton Tanner fell on at the Buckeye Trail 2. On the first play, Trevor Carman bulled into the end zone. Madzia’s PAT knotted the contest at 14.

A fake punt by the Warriors came up shy of the first-down sticks, giving the Huskies good field position at their own 45.

Eight plays later, Cassidy swept around his left end and found the end zone from a yard out. Madiz made it 21-14 with 2:55 left in the first half.

The Huskies were driving when they lost a fumble in the final minute of the third quarter, but the Warriors couldn’t capitalize.

Buckeye Trail did reach the end zone midway through the final quarter, but a holding penalty negated the score and stalled the drive.

“We had opportunities. We really did,” Buckeye Trail head coach Donnie Kerns said. “Every time we started moving the ball we shot ourselves in the foot. They (Harrison Central) are a really good football team. We went toe-to-toe with that team, so there’s a lot to be optimistic about. I think they were predicted in The Times Leader to win seven games. I think we can win seven games.

“We had a touchdown called back due to a penalty and we fumbled deep in our own territory that basically gave them a touchdown,” Kerns added. “I feel that if we didn’t get that penalty, we win that game.

“I’m proud of our guys. They battled and battled against a really good football team in Harrison Central.”

The Warriors had one last chance, but Neuhart’s pass was intercepted by McAfee to seal the deal. The freshman also caught a 32-yard pass on third-and-14 from his own 7.

“We’re growing. We’re young. We’re figuring it out,” Hayes noted. “This is the first time we’ve dealt with adversity this season, and we came out with a win.

“That’s a 14-year-old having to grow up really fast,” Hayes said of the 5-9, 165-pound McAfee. “We expect those guys to make plays. I’ve watched them playing around town in backyards. They’ve been doing it all their lives, so I don’t think he flinched one time.”

Hayes also praised the play of fellow freshman running back Michael Quito who was forced into extended action when senior Nathan Bertolino went down early with an unknown injury.

“Nathan got a little dinged up there, but Michael came in and did a very good job. He ran hard,” Hayes pointed out. “We’ll get him looked at, get him evaluated and go from there.”

Cassidy completed 14-of-23 passes for 139 yards and the touchdown. He also ran for 20 yards and a score.

Rome finished with 143 yards rushing and caught five passes for 64.