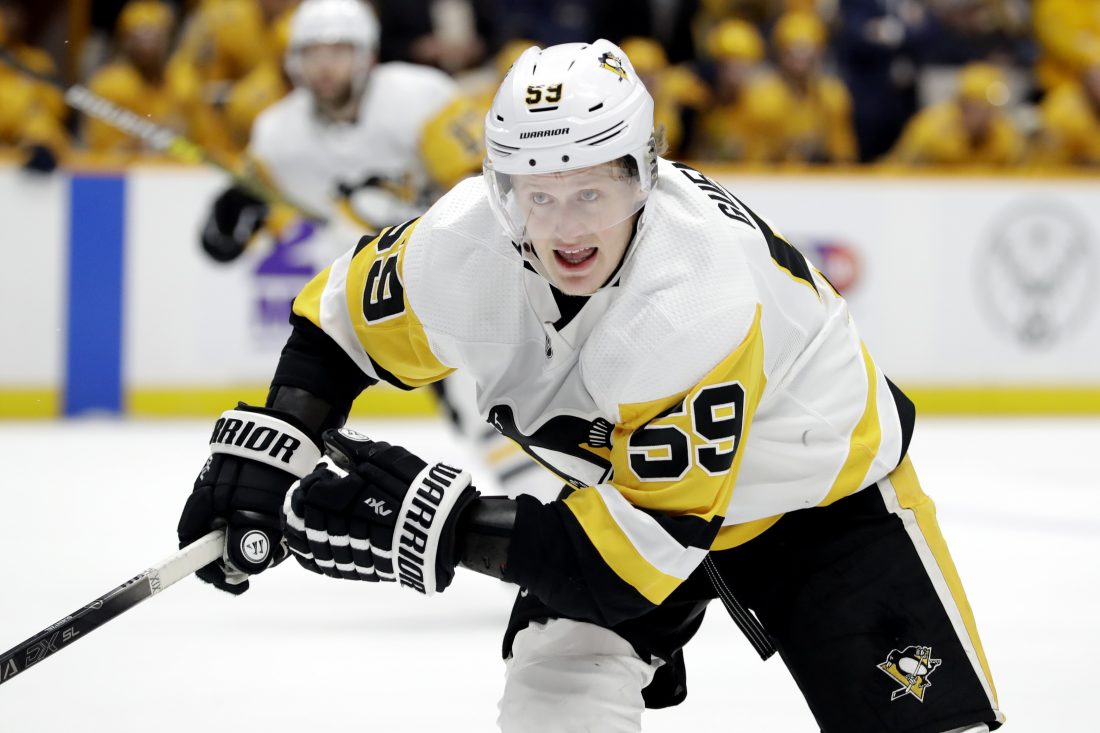 FILE -In this Dec. 28, 2019, file photo, Pittsburgh Penguins left wing Jake Guentzel skates against the Nashville Predators during an NHL hockey game in Nashville, Tenn. Columbus defenseman Seth Jones, Pittsburgh forward Jake Guentzel and Tampa Bay captain Steven Stamkos would’ve missed some or all of the playoffs if they started in April. Instead, the silver lining of the COVID-19 pandemic halting the season is those players are healthy and ready to contribute. (AP Photo/Mark Humphrey,File)

NEW YORK (AP) – Seth Jones stood on his surgically repaired right ankle as his Blue Jackets teammates practiced and played without him. That took its toll.

“It gets mentally draining,” Jones said.

Like Jones, they were injured late in the NHL season and would have missed part or all of the playoffs had they started in April. Instead, the four-month pandemic shutdown has given them a second chance for them to heal up in time for the rescheduled battle for the Stanley Cup.

Being ready for Game 1 under normal circumstances — if Columbus held on to make the playoffs without him — would have been a struggle for Jones. That was the eight-week mark since surgery, with a 8-10 week recovery timeline.

“I really didn’t start feeling back to myself on the ice until about week 13 to 15,” Jones said. “The extra time obviously did pretty good for me.”

The 25-year-old called the situation “a little bit of a blessing in disguise.” Captain Nick Foligno knows having Jones is huge for the Blue Jackets against the high-powered Toronto Maple Leafs in the best-of-five qualifying round.

“It would’ve been a lot different had we been playing the playoffs with him on probably one leg,” Foligno said. “To know that he’s feeling good and excited about his opportunity to be able to play at full health I think is a huge boost for our club and something that we don’t want to waste.”

Having Guentzel back is a boost for the Penguins, who open their series against the Montreal Canadiens when the playoffs begin Saturday. The 25-year-old thought his season was over after undergoing right shoulder surgery in late December that carried a 4-6 month recovery time.

Some may still not get the chance.

Carolina defenseman Dougie Hamilton recovered from a broken left leg but has been absent from several recent practices, and his status is in doubt. Teammate Brett Pesce and Columbus forward Josh Anderson would each need his team to advance to at least the conference final to be ready after shoulder surgery.

Stamkos knew what to expect from his history of injuries. He felt good skating in a small group with no contact, then “hit a little rut” that caused him to miss the start of training camp and is now on pace to return during round-robin play next week.

“Chalk it up to the ups and downs of going through a rehab,” Stamkos said. “We’ll see how it goes.”

To go far, the Lightning could use a healthy Stamkos filling the net on the power play and leading a deep, talented lineup. Coach Jon Cooper knows Stamkos might take a few games to get his timing back, then he’ll be able to contribute in the way he likely couldn’t have in the spring.

“That’s what we’re looking for him to do: to compete, to lead as our captain, to score when he can and be the responsible player that he’s grown into as the years have gone on,” Cooper said. “He has a big role on our team.”