Her Harrison Central squad had just turned in a 703 in Game 3 and entered the six Baker games with a slim 37-pin advantage over Conotton Valley.

But, with the Rockets closing in, the Huskies picked up their game, closing the nine-team event out strong and securing the last of three spots in next week’s district tournament in Zanesville.

“They poured it on in the Bakers,” the Harrison Central head coach said of her team. “They bowled well there. That’s what got us out.”

Harrison Central joins sectional champ Claymont and runner-up Minerva in advancing to Sunrise Strikes on Feb. 21, along with a trio of individual qualifiers that include a pair of locals.

Monroe Central’s Shaylei Giesey became the first Seminole bowler — boy or girl — to reach district play, while St. Clairsville’s Emma Poe earned her first district berth. They’ll join Conotton Valley’s Katie Schaar at next week’s event, which begins at 11 a.m. There, one boys team and two girls teams will advance, along with one boy and two girls not on qualifying teams.

The top three teams and top three individuals, not on a qualifying team, advanced Thursday.

Union Local’s Cherika Koplets also advanced as an individual qualifier during sectional action at Boulevard Lanes in Dover. The Jets finished fourth as a team, just 18 pins out of qualifying.

Harrison Central registered a 977 Baker total to pull away for a 203-pin cushion against Conotton Valley.

The Huskies finished with a score of 3,146. The Mustangs and Lions battled it out for the top spot, however, with Claymont withstanding a late charge by Minerva to win by 33 pins (3,466-3,433).

Claymont also boasted the sectional champion in senior Kayla Beckley. She fashioned a 599, boosted by a Game 3 score of 227. The Minerva duo of Megan Keister and Skylar Thompson were second and third with scores of 556 and 541, respectively.

Tory Thompson, a junior, paced the Huskies, finishing fourth with a 500. Teammate Kamree Best was tied for 10th with Poe with a 463.

“We struggled in our regular games,” Parkinson said. “We couldn’t pick up our spares. But we put things together for the Bakers.”

Parkinson praised the continued team effort from her club, especially a freshman who came through in a pinch.

“Lauren Best came off the bench and bowled well,” she said of the newbie, who rolled a 145. “It took all of the girls to come together and get us out. We live for another week. I’m very proud of my Huskies.”

For Giesey, the district berth came after missing out by just a few pins during a previous sectional tournament.

“She was really heartbroken about that,” Monroe Central head coach Tessa Hill said of the senior, who rolled a 470 and showed great emotion after finding out she’d qualified. “She really put a lot of great effort into trying to improve her game. She’s a pretty good all-around athlete. We’re pretty excited.

Giesey started her day with a pair of 159s before finishing with a 152.

“She tried to stay consistent and keep her head up and make some good shots,” Hill said. “She came through.”

As did Poe, a sophomore.

“She puts in a lot of time with her dad, which helps her a lot,” Red Devils head coach Courtney Reinbold said. “Her goal is to be better than him and she’s getting there quick.” 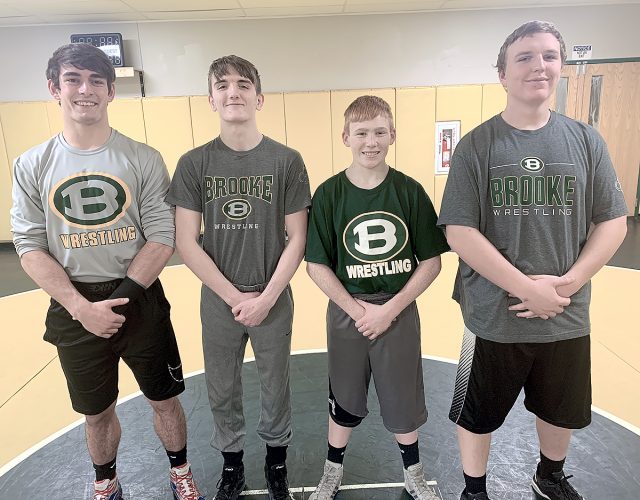 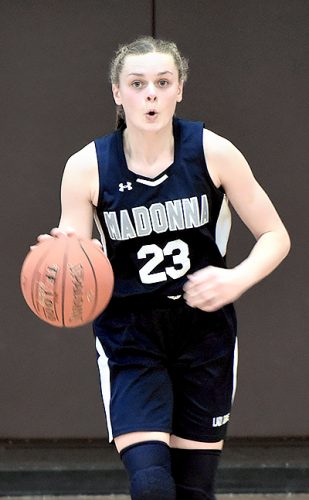