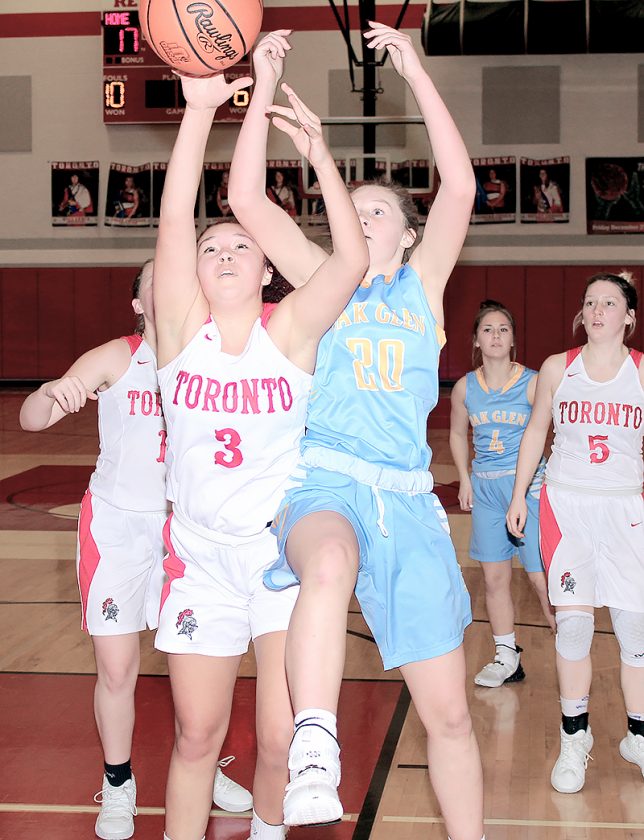 TORONTO — Coaches claim basketball is a game of runs, and Monday night’s matchup between the Oak Glen and Toronto girls basketball teams certainly proved that point.

The Red Knights staged a rally to take the lead early in the fourth quarter, but the Golden Bears recorded a rally of their own and found a way to earn a 61-55 victory inside the George J. Kunzler Memorial Gymnasium.

Oak Glen staged a fourth-quarter rally to pull out a victory at Toronto for the second straight season.

“We found a way to win, but I was not sure that we were going to be able to do that,” Oak Glen (5-6) head coach Scott Wiley said. “We did not take care of the ball as well as I would like us to. What we did was we did not stop on defense. That helped us the most. We scrapped, clawed and gave everything we had.

“I tried to rotate girls into the game. I tried to give some of younger players some playing time because we want them to know what to do in situations like that. Alexus Greenlief came in and did a nice job. She rebounded well.”

The game changed in the second quarter, as the Golden Bears outscored the Red Knights, 20-4, in the quarter to turn a nine-point deficit into a seven-point advantage at halftime.

“We got off to a goods start, but then we had a horrible second quarter,” Toronto (6-9) head coach Rusty Hodgkiss said. “We gave up 20 points in the second quarter. Saturday, we gave up 28 for the whole game. We did not stop throwing the ball to the blue team. To give them credit, they are quick. They are aggressive. They are physical. They sped us up. They pressured us.”

The Red Knights came back to tie the score in the third, but a 6-0 spurt helped the Golden Bears take a one-point lead into the fourth.

Toronto took a 41-40 lead in the fourth, but Oak Glen answered with a run of its own and built a 53-45 lead with 3:31 left to play. The Red Knights responded with a run, as they pulled within two points with 45.7 seconds left, but the victors tallied the last four points of the game to earn the victory.

“We try to rotate kids into the game,” Wiley said. “We wanted to wear them down. We wanted to try and be patient as much as we could. We tell everybody if you don’t play well in the first half, you are not going to play in the second half. At the end, we stuck with the girls we had on the court, and they got the job done.”

Though his team came out on the losing side of things, Hodgkiss was proud of the way his team battled throughout.

“The plan for this year is to compete,” he said. “We fought back. We took the lead, but they did what they had to do. At one point, one of their girls got down on the floor and got a rebound, while four of our girls stood and watched. Oak Glen made all of the want to plays. They made the plays you don’t have to have talent to make, but they are talented. They made the plays, and we didn’t.”

A trio of players also finished in double figures for Toronto. Riley Kinsey recorded a team-high 12 points, while Maddie Anderson and Jensyn Jackson each delivered 11.

Enochs scored the first basket of the game, but the first quarter belonged to the Red Knights as Toronto built a 15-6 advantage heading into the second.

A basket by Andrews tied the score at 15 with 3:42 remaining in the first half. Oak Glen ended the first half on a 9-2 spurt to take a 26-19 lead into the locker room at halftime.

“We played more aggressive,” Wiley said about what changed for his team in the second quarter. “We started out in our half-court man. Then, we got into our full-court man. That got us going. In the half-court, we kind of sit back and then get ready. By switching to full-court, we are able to get up on people.”

The victors responded with another 9-2 spurt to take a 38-32 lead on a basket by Greenlief, who finished with eight points. Toronto tallied the final five points of the quarter to pull within 38-37 entering the fourth.

“The thing with being competitive is, when you lose, it hurts,” Hodgkiss said. “If you lose by 40, you think, ‘OK we did not have a chance.’ But, when you fight and still lose, it hurts.”

“They came back again,” Hodgkiss said. “I am not going to be able to sleep for a couple of nights. We were down three, and things were a mess. I like it when things are a mess. I like our chances when things are a mess. I thought Jensyn Jackson was going to come down and pull up and hit a 3 in transition to tie the score. Instead of ordering a sundae, she ordered a plate of ice cream. She passed the ball to Abby Liddick. The pass was tipped and it went out of bounds.

“Enochs hit a big 3 for them. She shot it from like 25 feet. It was a big three for them. It touched nothing but net. We were on a run, but then she hit that 3. That was a big shot for them.”

Oak Glen: Slated to play Madonna for the first time this season Wednesday at home.

Toronto: Plays Catholic Central for the second time this season on Wednesday at home. 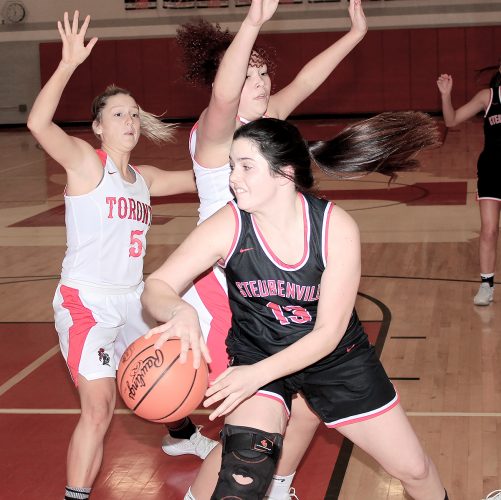 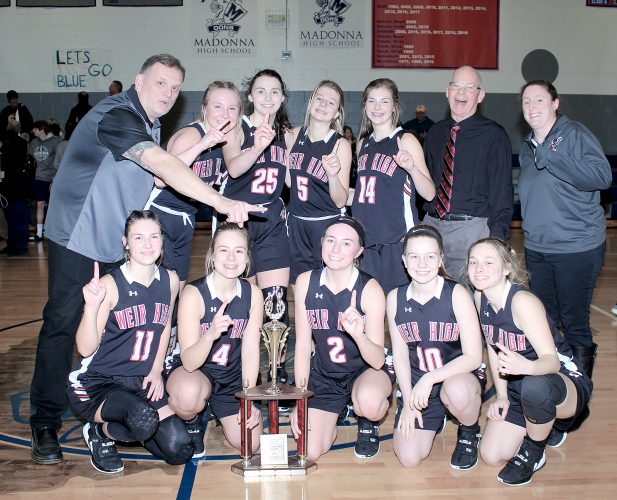