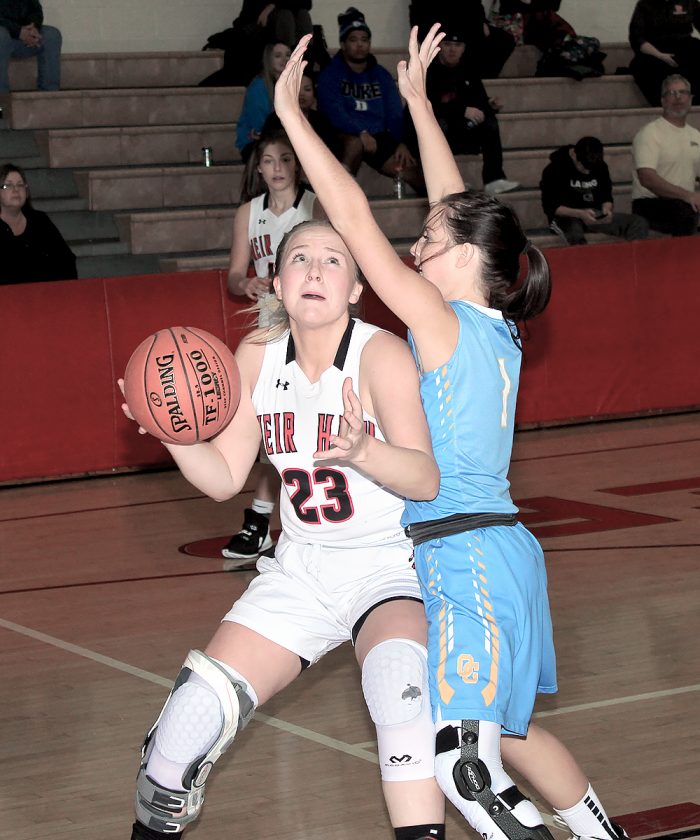 WEIRTON — The Weir High girls basketball team has been in every game so far this season despite starting off 1-3. After trailing Oak Glen by 11 points through one quarter Wednesday night, it looked to be an off night against a team that entered with a 3-0 record.

There were numerous reasons why Weir High (2-3) was able to shake the slow start and win by 16 points. Head coach Rick Stead credits it to switching his defense. Man-to-man did not work in the first quarter.

“I think it’s the best game of the year for us because we faced some adversity in the first half, made some adjustments and came back to win the basketball game.”

The other reasons were rebounding and free throw shooting.

Crashing the boards and boxing out is a major problem for the undersized Golden Bears (3-1), and the Red Riders exploited that with 52 rebounds. Oak Glen only collected 27. In fact, Leah Maley (13 rebounds) and Taylor Nutter (12) combined for two fewer rebounds than the Golden Bears overall.

“They’ve done a great job of crashing the boards,” Stead said regarding Maley and Nutter. “We might have even out-rebounded East Fairmont and North Marion (both defeats). They’ve been consistent in getting rebounds and some putbacks. The foul shooting also was better in the second half, which made a big difference.”

“We knew they weren’t going to lay down and die on us,” Oak Glen head coach Scott Wiley said. “They’re pretty quick in getting back. All of their shots were going in. I don’t know what it was. We could not put the ball in the hole. I thought we had a lot of shots underneath and had some good open looks, but they wouldn’t go in. We’re streaky like that.”

Oak Glen led, 19-8, after the first quarter. Weir High then outscored it, 17-9, in the second and trailed by three at halftime. The second half saw the Red Riders with a 29-16 advantage.

Isabella Aperfine paced the Red Riders with a game-high 17 points, seven rebounds, one assist and multiple steals. Ten of her 17 points came in the second half, despite missing most of it due to foul trouble.

“She always plays well and hard,” Stead said. “She’s an aggressive basketball player. She did a good job and made some shots in the second half that was a key for us to pull away.”

Maley finished with a double-double (12 points and 13 boards), while Nutter was not far behind with six points and a dozen rebounds. Sophia Mikula recorded 15 points and six rebounds (five offensive). Reagan Hoover delivered a pair of points, seven rebounds and three assists off the bench.

For the Golden Bears, Maddie McKay had eight points and seven rebounds before fouling out late. Reece Enochs, who fouled out with 7:04 left in the game, was the lone Bear in double figures with 10 points. Brooklyn Loveland collected seven points and six boards, while Brittney Giorgini also had seven points.

“We only had about 14 points in the paint. That and rebounding are the two main things that you must be able to do,” Wiley said. “We also were in foul trouble. It seemed like we were getting all of the calls early, then the switch flipped.

“We couldn’t make a bucket, but we never stopped playing. I have no complaints about the effort.”

WEIR HIGH: Hits the road for the first time this season against Brooke at 7 p.m. today.