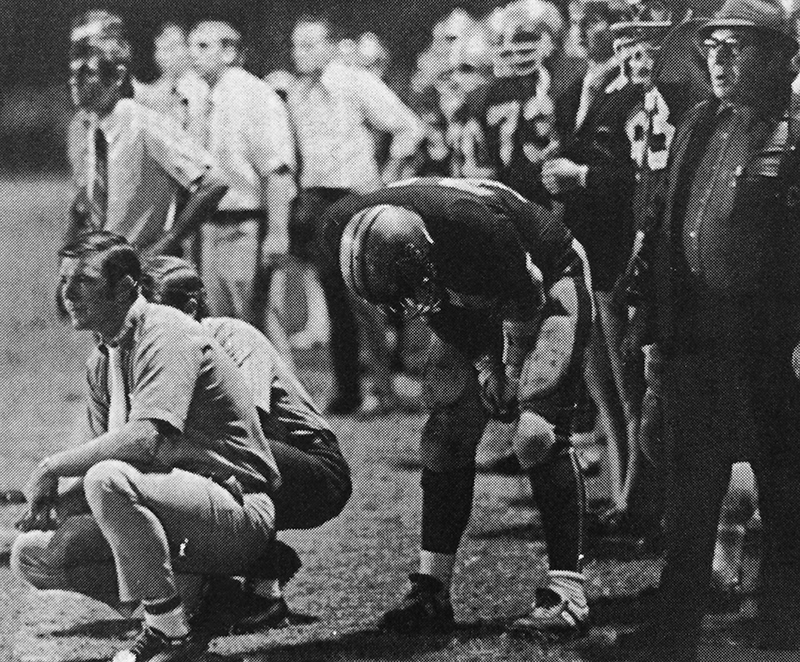 Leader. It is the one word that became a common theme when discussing Tom Korab.

The head coach of the 1971 Catholic Central state champion football team, Korab died Nov. 14 at the age of 80, but the legacy he left, in particular to those that played for him that year, will not soon be forgotten.

“I remember coach Korab as someone who made a very intimidating impression upon us as a football team,” said Ray Saccoccia, who was a receiver on the championship team. “His first year, our group was juniors, and we found out he was a tough, hard-nosed, no-nonsense coach. He was a leader, he knew how to lead. We bought into him, and his message as a group were quite successful under coach Korab.

“I think you take, or you should take, something away from all leaders that you deal with. His message, to me, of being tough and never quitting, is a message that you do take away (after high school). I’m sure a lot of the guys that I played with at Central took that message away from him to be tough and never surrender. Those are things that you take with you the rest of your life and pass on to those that you come in contact with, especially in leadership roles. I always looked to coach Korab as a solid leader.”

“The first thing I would say is that he was just an incredible person,” said Paul Carapellotti, another receiver on the 1971 team. “He had a great impact on so many young guys. He sincerely cared about what kind of men, fathers, husbands and citizens we would become. He was a leader.

“Coach was just a special person, and his legacy will be the impact he had on so many young men. The lessons that he taught us, we still remember later in our lives. We owe him a great deal of gratitude, no doubt. We’re going to miss him a great deal.”

Upon getting the job in 1970, Korab moved Dave Tuttle from quarterback to running back, a move that Tuttle admittedly wasn’t impressed with at first. By the end of his senior season, during which he rushed for more than 1,100 yards, the new sideline boss had earned Tuttle’s respect and left a lasting impression on him.

“He took care of his players. He took care of us, and we appreciated it by busting our butts for him. There is an old cliche about running through a wall for someone, and I would have for him. I’m going to miss that guy. He was a great man. I loved that guy”

Another move Korab made was naming Dave Moitis, who played on the jayvee team the year prior, as a captain — a title he held his junior and senior years.

“He made all the difference in the world for me playing football at Central,” said Moitis, who led the championship team in tackles with 100 solo and 101 assists from the linebacker position. “Korab came in, and he evaluated everyone equally on an even playing field. My junior year, he picked me as captain, which was unheard of. I didn’t even letter the year before. He was fair. I would say he was a winner. He just wanted to win and did not like to lose. He didn’t pull any punches. He wanted to win, and that is what I liked about him.

“He could judge talent, and he knew how to put guys in the right positions. That is what I think he did best. He put guys where they were most productive, not where they wanted to be. He came in with an open mind and put people in the right places. He inspired us.”

The 1971 Central team was one of the final squads to be a state champion under the pre-playoff format, as Ohio began the system the following season. The Crusaders, the Class AA champions, finished 10-0, defeating eight Class AAA teams, six of which were undefeated entering their game with Central, and outscored opponents 253-26, with six shutouts. That team is widely regarded around the valley as one of, if not the best, teams to ever come from the area.

“Our schedule my senior year probably was the toughest schedule in the history of Catholic Central, and he said, ‘Don’t worry about it, we’ll play football,'” Tuttle said.

“A lot of people think we could have beat anyone in the state that year,” Carapellotti said.

What made Korab a good coach? Well, those that played under him pointed to two things in particular: His ahead-of-the-curve schemes and game plans.

“There were some exceptional players on that field. He just made sure nobody was above the team. He made sure the game plans took into account who we were playing,” Carapellotti said. “He really was a good tactician. We ran an unbalanced wing-T, which was something no one else back in the 1970s ran. We were very difficult to prepare for. He was a tremendous man, but he also was a really good tactician and put together a tremendous coaching staff.

“The guy was just really, really good at what he did. He was fairly young when he coached us. It really amazes me looking back how much success he was able to have early on in his career. He had already done really well at Dennison St. Mary’s before coming to Catholic Central.”

“He was ahead of the game for back then,” Tuttle said. “I can tell you this much. When I found out we were so far advanced is when I got recruited and went to the University of Kentucky. On the freshman team, they couldn’t stop me. We were so advanced in a lot of stuff we did.”

“If Korab said, ‘Do this,’ we did it,” Moitis said. “We didn’t know how good we were until the end. Korab was a good person, and he taught us how to win. He expected us to win. We thought we could compete, and we never thought we were outclassed by anyone. It was never going to be an upset. I loved him.”

Korab was far from just a football coach. He also was the athletic director, and coached track. During a long career that saw him hold the title of AD at five schools, including Central and Wheeling Park, he coached baseball, basketball, tennis and volleyball.

“He was just one of those guys that just had an imposing kind of personality,” Carapellotti said. “He demanded your respect. He was a leader of young men, and he was successful at being that his whole career. He made sure we were always taken very good care of. He really worked well in the community, with the families, with the boosters and the alumni. He was a great AD, too.

“A lot has changed since then, but I think he would have been successful in today’s era.”

Another aspect of the 1971 team is the close bond it shares to this day.

“I think it was a very, very unique situation. For four years at Central, our group had a lot of success,” Saccoccia said. “I think it was the chemistry among our group. We’re still friends today, and I think that is the basis of our success. We were talented, and coach Korab lent a lot of toughness to what we wanted to do.”

“Our biggest asset as a team — and I think coach would agree with this if he could tell you — was our togetherness,” Carapellotti said. “We were really together. He made sure we were a family. To this day, my closest friends in life are my teammates from that 1971 team. Those of us that are still local, we see each other, if not on a daily basis, on a weekly basis. We have remained an extremely close group.”

“We played as a unit and as friends,” Tuttle said. “If someone made a mistake, someone had their back. We patted each other on the butt, we picked each other up and nobody was the star. We all were together.”

“I’ve had a lot of health problems in my life. All the guys that I played with came to see me,” Moitis said. “They spent time with me when I was sick. There were a lot of good guys in that group. I consider everyone on that team good friends. I would do anything for any of them. You can’t ask for more than that.

“We bled together. It was not easy, but it was fun.”

One of Korab’s lasting moments was when he was one of the honorees of the Franciscan University of Steubenville Baron Club Dinner in September.

“I think it’s a great loss for the Central community,” Saccoccia said. “I think that Catholic Central High School should be very proud of having coach Korab as one of their own. I think we’re all better off today for being associated with coach Tom Korab.”