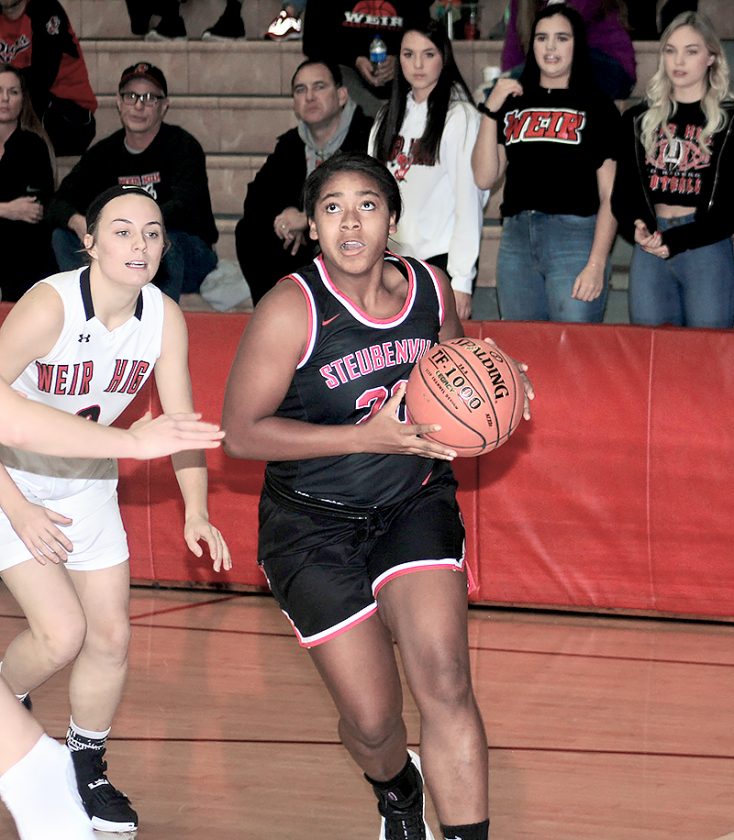 WEIRTON — Rivalry games can be exciting, and Thursday night was one of them.

The Weir High girls basketball team scored three points in the final 20 seconds to beat Steubenville, 44-40, inside the Carl Hamill Fieldhouse. It was the first time the Red Riders have beaten Big Red during the three-year coaching tenure of Rick Stead.

The teams were evenly matched, as they battled through a nip-and-tuck game with neither team having a lead of more than four points. For Weir High, it comes on the heels of a one-point overtime loss on Tuesday.

“It was tough opening the season Tuesday against East Fairmont, one of the better teams in the state,” Stead said. “Tuesday, we had a lot of turnovers, but in this, our second game, I thought the girls kept their composure, cut the turnovers almost in half and knew what they had to do going down the stretch. Jeff Lombardo always has a good team, and we knew this was going to be another tough one.”

The score was tied at 39-39 with 3:03 left in the game when Weir High made 3 of 4 foul shots and a late field goal going down the stretch. Big Red couldn’t get shots to drop and scored only once in those final three minutes.

“I saw Weir play East Fairmont Tuesday, and I knew this was going to be a battle,” said Lombardo, whose club now is 2-1. “Coach Stead has been working hard with his girls for a couple of years now, and they are much improved. I told the girls that there are times when you take shots and they just don’t fall, but we executed what we were trying to do — get the ball inside. Sometimes, you miss shots you normally make, and today was one of those days. It seemed like there was a lid on the basket from inside. The pressure started to mount, and we didn’t do well at the free throw line.

“This is the first time we’re facing adversity this season. In a season, there are going to be ups and downs, and this was one of those down ones. Our girls are looking forward to getting in the gym (today) so we can rebound. We come out and play again next Wednesday, and we’ll look toward the end of the season when we get to see Weirton again.”

Big Red got a last-second goal from senior Madison Fields to end the first period with a 10-9 lead. The Red Riders bounced back in the second quarter to take a 26-24 lead at the intermission, and the teams were tied, 32-32, going into the fourth quarter.

Senior Sophia Mikula, who led all scorers with 25 points, made two pressure free throws with 1:22 left in the game to give Weir High the edge at 41-39. Fields responded, making 1 of 2 from the line 18 seconds later.

Lombardo got a timeout after the Fields make and, when Weir High turned the ball over, Lombardo took another break with 39.1 seconds left to set up a final play. Big Red’s attempt at the go-ahead basket went awry, and Red Rider freshman Reagan Hoover was fouled with 20.3 seconds left. She made the second of a double bonus chance to arm Weir High with a 42-40 lead.

The Red Rider defense, which forced 17 Big Red turnovers, got the final one with 14 seconds left. Mikula missed a driving shot on the transition, but junior Taylor Nutter was there for the rebound and put-back to seal the win with 8.5 seconds on the clock.

Big Red’s two post players, Fields and sophomore Elexis Martin, were a force inside. They combined for 35 of Big Red’s 40 points. Fields had nine field goals but was only 2 of 8 from the foul line for 20 points.

“It’s tough for us to match up inside because we’re under sized.” Stead said. “We wanted to switch on the inside when Big Red ran their picks, and we did it sometimes. But, when we didn’t, Fields and Martin got easy shots. We had a bunch of turnovers in the first half (11), but we did much better in the second half with only seven, and I think that was one of the keys for us.”

The Weir High scoring was spread out. After Mikula’s 25 points, junior Isabella Aperfine scored five. Her sister, freshman Sophia Aperfine, and Nutter scored four apiece. Leah Maley, who led the Riders with 13 points on Tuesday, got into some early foul trouble and was held without a field goal, but she made 3 of 6 free throws. Senior Olivia Bernola got a key field goal early in the fourth quarter, and Hoover scored one point with that foul at the 20-second mark.

The Big Red jayvees ran away with a 55-14 win over Weir High. Freshman Kylie Maxwell led Big Red with 15 points, while sophomore Marissa Howard tallied five for the Red Riders.