Madonna gets in, Indian Creek shifting focus to next round 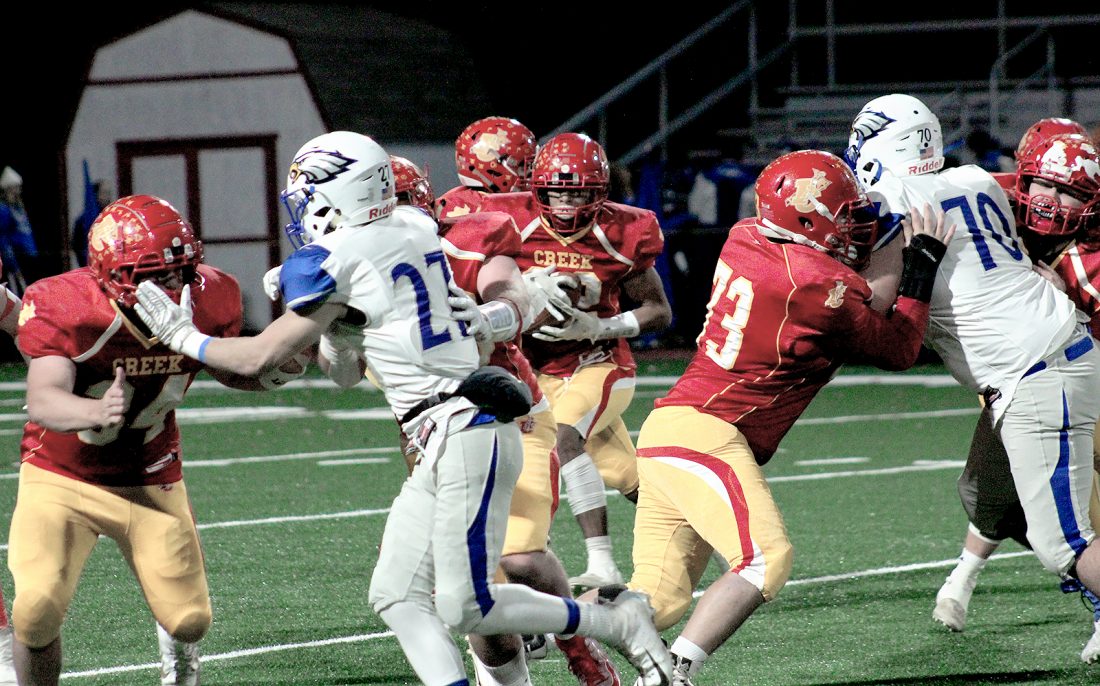 STEUBENVILLE — Three teams are left to carry the area’s flag in the high school football playoffs, and two of them (Oak Glen and Indian Creek) are history makers.

The Golden Bears are 10-0 for the first time in school history. They finished sixth in the final West Virginia Secondary Schools Activities Commission Class AA computer ratings and will host the program’s first home playoff game on Saturday.

“It’s a great feeling,” Oak Glen coach Ted Arneault said about hosting a playoff game. “There is a lot of excitement — the kids have never been to the playoffs before. It’s been a long time for the community. It’s been since 2011.

“The community has come together and is very proud of the kids. I think they are starting to realize how special the whole situation is. A lot of people have been very supportive of our kids.”

Wyoming East is located in New Richmond. The Warriors began their season with five-straight victories before falling to Shady Spring and Man. They are currently riding a three-game win streak.

In 10 games, Wyoming East has scored 369 points, while surrendering 251. A win on Saturday would put Oak Glen, which captured its first OVAC championship since 1965, into the quarterfinals against either No. 3 Poca or No. 14 North Marion.

The Bears are one of three unbeaten teams in the Class AA field. The others are No. 1 Fairmont Senior, the defending state champion, and third-seeded Poca.

With its 6-4 record, Weir High finished 18th in the final standings and missed out on postseason action.

Thanks to its thrilling 35-29 victory over Hubbard in Saturday’s Division IV, Region 13 quarterfinals, Indian Creek improved to 10-1, making it the first team in school history to win 10 games. The Redskins also earned their initial postseason triumph, and it came during their first home playoff game.

Andrew Connor’s squad, the third seed in the region, earned a semifinal date this Saturday with second-seeded Poland (9-2). That game will be played at 7 p.m. inside Salem’s Reilly Stadium.

The other semifinal match, to be played at Maple Heights, pits unbeaten Perry, the top seed, against fourth-seeded Cuyahoga Valley Christian Academy (8-3).

Creek’s win over Hubbard, which had knocked the Redskins out of the playoffs in 2018, came thanks to one fantastic finish. Trailing 21-10 after three, Creek scored 25 fourth-quarter points. The game-winning score came thanks to a nifty 31-yard run by senior quarterback Sam Mazar.

Poland advanced with a 31-0 beating of Struthers. Just nine days earlier, the Bulldogs earned a 14-12 win over Struthers in the regular-season finale.

Senior tailback Trevor Fante had another outstanding game for Creek in the Hubbard victory, collecting 169 yards on 33 carries and scoring three touchdowns.

The third area team still alive is Madonna. The 6-3-1 Blue Dons finished 16th in the West Virginia Class A standings. Their reward is a Saturday trip to No. 1 Doddridge County. That kick also is set for 1:30 p.m.

With Friday’s 46-7 win at Tygarts Valley, Doddridge County wrapped up its second-straight unbeaten regular season. The Bulldogs are the lone undefeated team remaining in the Class A ranks.

Doddridge County High School is located in West Union, which is a little more than two hours from Weirton.

In compiling their 10-0 mark, the Bulldogs have scored 418 points, while allowing just 66. They have recorded five shutouts.

Doddridge’s offense is built around running back Hunter America, a 5-foot-9, 190-pound senior. He holds a number of school records and has gained 1,689 yards this season on 214 carries and scored 20 touchdowns. In the finale against Tygarts Valley, America gained 231 yards and had four scores.

In Big Red’s 27-21 Division III, Region 9 quarterfinal loss to Aurora, senior tailback Tayveon Crawford gained 187 yards on 28 trips. That performance gave Crawford 2,089 rushing yards for the season. Thus, he now is No. 2 on Big Red’s list of all-time single season rushing leaders. Puck Burgwin leads the list with the 2,126 yards he gained during nine games in 1931. Crawford’s 28 touchdowns put him in a tie for third with Nate Johnson on the all-time single season touchdown leaders.

Weir High’s inability to make the Class AA playoffs brought an end to the outstanding football career of speedy senior Sebastian Spencer. In 10 games, Spencer finished with 894 rushing yards on 119 carries, 848 passing yards (he completed 97 passes) and 64 receiving yards. Thus, his total offense number was 1,806, or 181 yards a game. In the all-purpose yardage category, he finished with 1,120, an average of 112 per game. He ran for 14 touchdowns, caught a pass for another and threw for nine more.

The area lost two outstanding coaches recently with the deaths of Dick Thurnes and Dan McGrew. Thurnes had tremendous success leading the football programs at Cameron, Warren Consolidated and Buckeye South. He had a career record of 112-36-7. McGrew’s head coaching career included stops at Smithfield, Bellaire St. John and Weir.

Things certainly didn’t go as planned for Toronto in its Division VII, Region 25 quarterfinal match with Louisville St. Thomas Aquinas. The Knights rolled to a 35-0 victory. The loss was the third for the Red Knights in 11 outings. Despite the setback, there should be plenty of optimism surrounding the Toronto program next season, as numerous starters will return to Josh Franke’s lineup.

The future also looks bright for Brooke, which ended its regular season with a convincing 26-12 victory over 15th-ranked Preston County. The Bruins finished at 3-7 and only had three senior starters.

The highest-ranked team to fall in the first round was Clarksville Clinton-Massie in Division IV. It was ranked No. 3 in the final AP poll but fell to Germantown Valley View, 42-28. In Division IV, four of the state’s top 10-ranked teams bowed out of the playoffs.

All second-round playoff sites will feature presale online ticketing at ohsaa.org/tickets. Fans are encouraged to purchase tickets in advance, as participating schools keep a portion of presale ticket revenue.