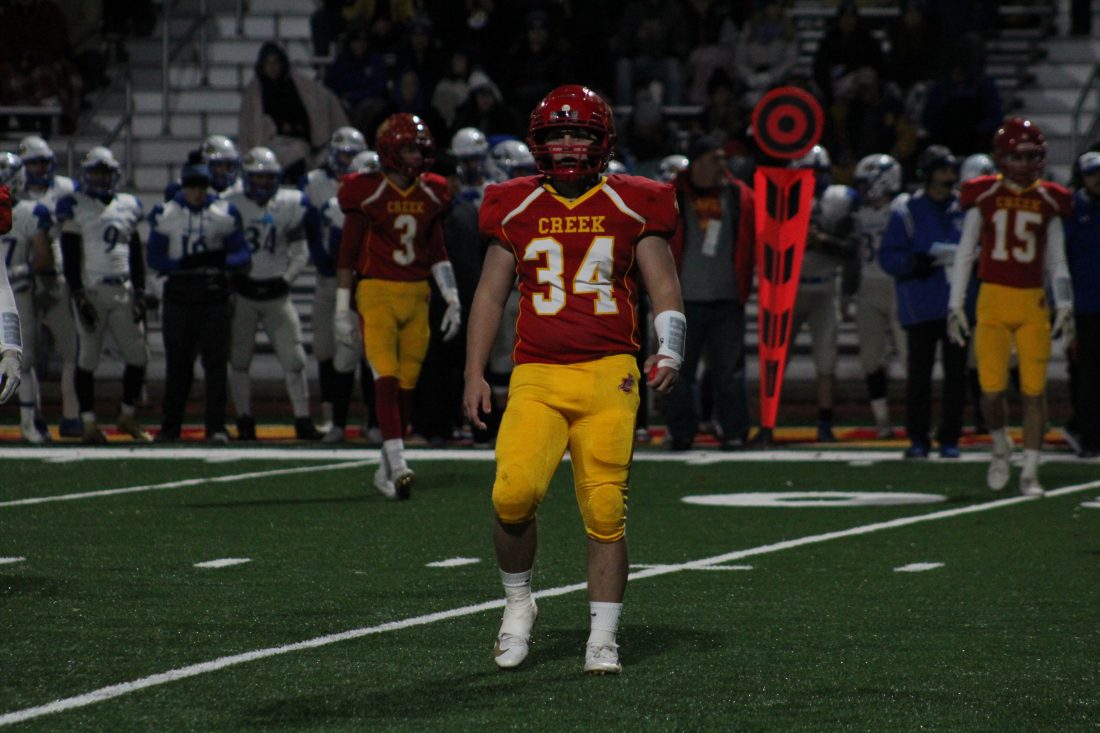 Senior linebacker Tyler Smarrella needs to be double-teamed in order for opponents to have a chance at scoring on the Redskins. There’s no way around it.

Even when he was opposing offenses’ key, Smarrella still tallied 103 tackles, 48 solo, 41 assists, 13 for a loss and a sack, along with a forced fumble, two fumble recoveries, one interception and five pass breakups during the 2019 regular season.

For his efforts, Smarrella is the Division IV Eastern District Defensive Player of the Year.

“That’s an honor he’s worked for since Day 1,” Indian Creek head coach Andrew Connor said. “He’s the general of our defense and is a student of the game. There’s no such thing as time off for him. He’s a hard-working linebacker that makes the big hit when you need it. He’s what we want our kids to be at Indian Creek.

“He’s out there all the time, whether it’s on offense or defense. He will play everything and does everything with a smile.”

Connor added that he doesn’t believe Smarrella missed a snap all season, offense or defense.

Smarrella nearly was a player of the year along with senior teammate Trevor Fante, who finished second in the Offensive Player of the Year votings to Indian Valley’s Zach Love. Nonetheless, Fante is a first-team running back.

“He’s consistent. He runs hard for us,” Connor said. “He gives us really good rushing games, whether he’s inside or out.”

“He’s been a stalwart on the line for the last three years,” Connor said. “Other kids look up to him. He’s a steady guy and does a great job.”

Two Redskins join Smarrella as first-team defensive members, including lineman Matt Schaefer. The junior tallied 34 tackles, 10 solo, 18 assists, two for a loss, four sacks and a pick-6. Offensively, he had 41 carries for 169 yards and two scores.

“Very athletic with speed off the edge,” Connor said. “He’s a good tackler and a very physical football player. He’s a great running back, too. He does a good job running between the tackles.”

The other first-teamer on defense is senior back Brock Lucas, despite missing games late due to an injury. He totaled 49 tackles, 28 solo, 21 assists, eight pass breakups and two interceptions. He returned five punts for 79 yards, averaging 15.8 per return. He also caught nine passes for 125 yards.

“The perfect strong safety who loved to hit,” Connor said. “He has a linebacker mentality. Unfortunately, he got hurt against Harrison Central. He’s been around forever ever since his dad coached with me and started as a water boy. He played with a lot of physicality.”

One more first-teamer falls in special teams, and this is senior kicker Brandon Hiles. He connected on 25 of 30 PATs and three field goals (23, 24 and 25 yards), including a game-winner against St. Clairsville. He also had eight touchbacks on kickoffs. Defensively, he collected 66 total tackles, 31 solo, 28 assists, three for a loss, four sacks, two fumble recoveries, an interception, one score and three pass breakups.

“He’s clutch. He’s made big kicks for us, whether it was the playoffs or the St. C game,” Connor said. “It was convenient and a nice thing to have as a coach.”

“All of those kids just played extremely well, went out and worked hard,” Connor said. “Those are the kids you need to be successful.”

The final award the Redskins deservingly won is Connor being named the Division IV Co-Coach of the Year, along with John Glenn’s Matt Edwards. Connor and company were the Buckeye 8 North champions, OVAC champions, hosted and won the first playoff game in Indian Creek history and dealt with tragedy following the loss of assistant coach Mike Voltz in Week 4.

“That’s a credit to my coaching staff. You’re only successful with the people around you,” Connor said regarding the award. “This is a great football team that makes me look good. I also get great family support from my wife and kids.”

This season marked the fourth time Connor was named Coach or Co-Coach of the Year.